Ask any editor what the sweet spot is for historical novels, and most will tell you the 1880s in the American West. But the United States isn't the only country with a history of western expansion in that decade. Just north of the 49th parallel, similar events were happening in Canada.

My husband and I visited the Bar U Ranch a few weeks ago. This Canadian Historic Site is nestled in the foothills of the Rocky Mountains about an hour southwest of Calgary, Alberta. It's one of a group of sites owned by Parks Canada, set aside as working monuments of a bygone era to keep history alive. The Bar U is the only one of these sites dedicated to Canadian ranching history. 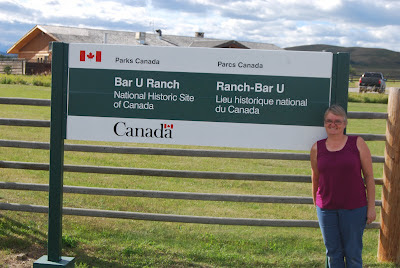 I could tell you of the history of the place, but much of it can be found here if you're interested.

A few key points stand out:
* Cattle from the Bar U Ranch were shipped as far as Chicago, Montreal, and England.

* Two of the owners of the ranch were instrumental in underwriting the Calgary Stampede, a rodeo of world renown, in 1912.

* Starting with 3 Percheron studs and 75 mares from France, Bar U horses won almost every event they entered in the World's Fair in Seattle in 1909. This herd became very important when France's breeding stock was wiped out during World War I. France bought breeding stock from the Bar U, meaning that virtually all of the world's Percherons are now from the Bar U bloodlines.

* Edward Prince of Wales visited in 1919 and was so impressed with the Alberta ranchlands and the cowboys of the Bar U that he bought his own ranch, the E.P., next door.

At the National Historic Site, we were treated to a wagon ride among the ranch buildings behind a Percheron team. 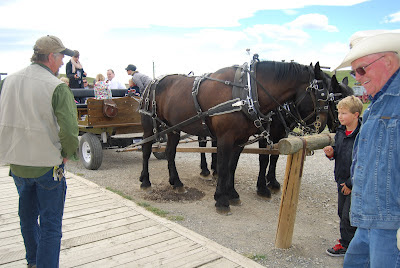 We explored inside nearly every building on the ranch from the blacksmith and harness shops to the cookhouse and the barns. Very few places are off limits to visitors. 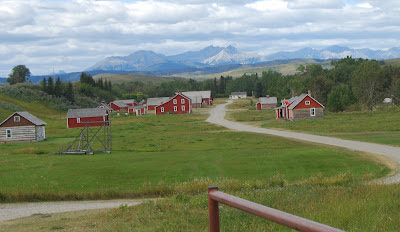 Half a dozen or more park employees were on hand in various parts of the ranch to explain life from 1882-1942, the era the historic site represents. All were willing to answer questions and chat about the history of western Canada and how it helped shape the world of its time. We visited with the leatherworker for a time. He'd just completed a guitar strap. One thing led to another until he invited my husband to pick up the guitar in the corner and play for a while. When other visitors went on their way, he serenaded us with a couple of songs he'd written. 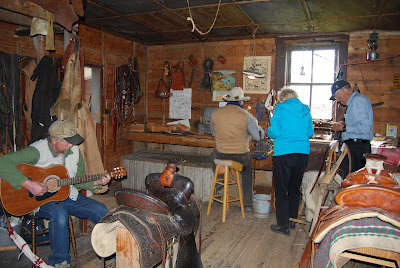 Round-up Camp provided visitors with 'cowboy coffee' and fresh bannock, cooked over a fire while we watched, and served with handmade Bar U butter and jam. The campfire cook gave us more details about chuckwagons and home on the range while we enjoyed these treats. 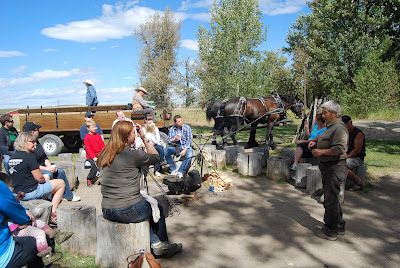 Back in the day, the Bar U provided all the food needed for its hands from its large gardens, fields, hogs, chickens, dairy herd, and beef cattle. That's a self-sufficiency lost to our modern world! They still have a large (very well kept) garden. 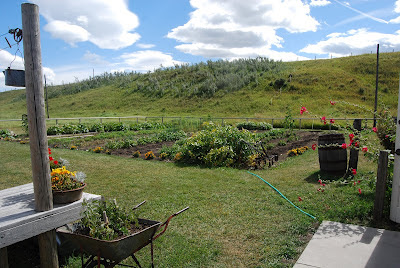 A day poking around a historic site can provide all kinds of fodder for stories, even for one who writes contemporary genres. My inner wheels are certainly grinding!

When's the last time YOU visited a historic site? What memories stick out for you?

Her first published work, a novella, was released in the collection Rainbow's End from Barbour Books in May 2012. Visit her website and blog to glimpse inside her world.