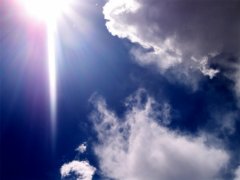 One night, I jerked awake and glanced at the clock. It was 3:10 AM. In my half-asleep state, I knew I had to phone Louis, a doctor friend. How can I phone him at this time of night? What if his wife answers? What will I say?

I lay for a while, debating what to do. Then I prayed, “Lord, if it’s you that woke me, please keep me awake. Don’t let me go back to sleep.” My mind started to clear, and I grew more and more concerned for Louis. I eyed the phone across the moonlit room. Seeking confirmation for my actions, I woke my husband.

He struggled to understand me in his groggy state, then muttered, “You can’t phone Louis at this time of night. Don’t be ridiculous. Go back to sleep” He rolled over on his side. Within seconds his deep breathing showed me he was again fast asleep. I sat propped on my pillows.

Again I prayed. “Lord, is it you that’s keeping me awake? I want to be obedient to you no matter what. Please let his wife understand. In fact, if I’m wrong, let Louis understand too!” I clambered from my bed and headed for the phone.

Suddenly, I experienced a strange sensation, as if the Lord was saying, “What are you doing? Go back to sleep.”

Puzzled, but relieved, I responded, “Okay Lord, I’m going back to sleep, but if you need me to phone Louis later, wake me again!” I snuggled down in my bed and within minutes, I was sound asleep and didn’t wake until morning.

Throughout the day, I puzzled over the events of the night before. Should I have phoned Louis? Had I been disobedient?

Late in the afternoon, we received an unexpected visitor—Louis. As he sat sipping his coffee, I told him about the strong feeling I had that I had to phone him in the early hours of the morning. Chuckling, I said, “I wondered how you and Pat would have reacted when one of you answered the phone in the dead of night, and all I could say was, “The Lord wanted me to phone you, I don’t know why.”

Louis studied his coffee for a moment then looked up at me. “Who said you had to phone me? The Lord?”

“Well, no,” I admitted. “But what else could I have done at that time of night? He woke me—I’m certain of that. And He kept me awake.”

“You could have prayed for me,” he said. “I was called to the hospital last night to do an emergency appendectomy. When I opened the abdomen, I discovered it had already burst. I’m not qualified to do an operation of the magnitude that this woman required—but there was no one else. So I shot up an arrow prayer, asking the Lord to wake some of His children urgently and get them praying for me.” He looked at me, his eyes narrowed to increase the impact of his words. “I glanced at the wall clock before I continued. The time was 3:10 AM.”

After he left, I ran the scenario back through my mind. I imagined the Lord sending angels to earth to wake His children, with the message, “Get them to pray for Louis. Now.” The one that woke me felt good as I jerked awake.

“Phone Louis?” I muttered as I tried to clear my sleep-fogged brain. “Why would I phone Louise? Do you know what time it is?”

“What will his wife say if I phone him at this time of night?”

“I’ll wake Rob.” That’s good, the angel may have thought. Now there will be two praying.
“Don’t be ridiculous,” muttered my sleepy husband. “Go back to sleep.”

I imagine the angel looking on in disgust as I clambered from the bed and headed for the phone.

Instead of asking the Lord what He wanted me to do, I had grasped the beginning of the idea—Louis! Then I had gone my own way, coming to my own conclusions. Fortunately, the operation was a success and the patient lived . . . but it was no thanks to me.

When the spies returned, ten of them said, “No way. We can’t do this.” Instead of speaking further with God, the people made their own “logical” decision. The result? Forty years in the wilderness.

Many writers have experienced a time when they’ve wanted their characters to do something, but the fictitious rebels seemed to take over the story and went in another direction.

“Hey!” the author wanted to shout. “I’m the author! You can’t just go your own way. I want you here, not there. You’re not listening.” But the characters did their own thing and often changed the plot of the story.

It’s time we learned to listen. Really listen. When God gets our attention and perhaps lays a person or situation on our hearts, it’s time to say, “I get it Lord. You want me to do something about Louis. What is it you would have me do?” And then listen!

Fortunately, the author can adapt the story to fit the new subplot that’s developing around his disobedient characters. In the same way, when we don’t understand, the Lord has back-up Christians who are more awake or more attune, and He can resort to Plan B. But what if He didn’t? What if that person had died all because I shot off to obey without being clear of God’s request?

A QUESTION FOR YOU. Have you ever had to deal with disobedient characters? What happened? Or have you ever unwittingly made a wrong interpretation of an instruction from the Lord?

SHIRLEY CORDER lives on the coast in South Africa with her husband. Her book, Strength Renewed: Meditations for your Journey through Breast Cancer contains 90 meditations based on times when God spoke to her during the rough times spent in the cancer valley. Sometimes she listened, and other times He resorted to Plan B. But He never gave up. Strength Renewed (Baker Publishing House) launches on October 1 and is currently available for pre-order. Please visit Shirley at ShirleyCorder.com, where she encourages writers, and at RiseAndSoar.com, where she encourages those in the cancer valley. Follow her on Twitter or on FaceBook, or sign up for her newsletter.
Posted by Shirley Corder