"To every thing there is a season, and a time to every purpose under the heaven." - Ecclesiastes 3:1 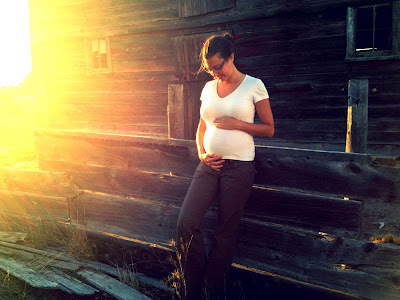 Autumn is touching western South Dakota already. Gone are the blazing days of over-a-hundred-degree temperatures, settling into soft warmth for cricket-filled night. No, the minute the calendar switched to August, a coolness crept into the evening air. A crispness, like a one of the season's last melons. Stars burn clear and bright in the night sky--thousands of them--thick as glittering morning fog. When my son goes out to play in the golden-hued late afternoon, he pulls on a jacket. Goldenrod pokes up in yellow beacons along a roadside choked with empty raspberry bushes, fallen wild roses, and elm leaves tinged the color of late squashes.

Even our ginger-striped tabby cat, christened "Charlie Broccoli" by my three-year-old son (don't ask; I don't know why, either, except it had something to do with Veggie Tales and Charlie Brown) is reluctant to slip out the door at nightfall as he's done for months. Last night I scooped him off the sofa at nearly ten o'clock, a warm ball of purring fuzz, and set him on the front step. "Go catch mice," I said, or something to that effect. "Good night." He gave the moon a chilly look, then me, and slipped back inside between my ankles.

Even I am changing as I try to fit my bulging belly into shirts and jeans that once skimmed a smooth waistline. I toss them wistfully one-by-one into the "after-December-when-I-can-finally-bend-over-again" box and thumb through my shrinking closet for something, anything, that will button or fasten or whatever it's supposed to do without gapping or making me hold my breath.

We are all changing. Nothing, no matter how permanent it may seem, usually is.

One of the biggest changes I've noticed lately is in my own writing habits--which have been a part of me since even before I could pen (or crayon) correct sentences. I've spent far more time staring at a blank screen than I have in years, and my idea list looks more like a grocery list gone insane: "...how about that historical fiction novel?... don't forget to pick up peaches at the grocery store... holy cow, you forgot to pay the trash company again... the Colorado peaches, not the California ones that ripen to the consistency of wrinkled softballs... so... what am I supposed to be writing about again...?"

I have almost no ideas--or no good ideas--and my brain feels like the Cream of Wheat I ate this morning as I put my hands on the keys.

It's bothering me. A lot. HELP!! When was the last time I didn't write... anything? Really? I mean, I just pumped out four full-length novels in less than three years--one of which finaled in the Christy Awards, for pity's sake--and have edited galleys, critiqued, proofread, worked on cover art, written interviews and articles, posted on blogs, and made a general nuisance of myself to the writing world.

Oh, and all of this took place after we 1) adopted a preemie with health issues; 2) raised said preemie to a running, jumping, bilingual, always-yakking, always-smiling three-year-old (how I'm not really sure; I know nothing about babies or children); 3) went through a harrowing process of brain surgery with Ethan to correct a malfunctioning shunt for hydrocephalus, and 4) underwent the grueling immigration process for my husband and son and moved to the U.S. after eight years abroad. So it wasn't like I was sitting around knitting for those three years. (If I knew how to knit, which I don't). We were busy. Our lives were upside-down. We barely slept.

So what's my problem now??!

Why can't I write? Why won't the words and ideas flow like they used to? Especially now that I'm not doing night feedings (yet) or running to the American Embassy with more paperwork or trying to explain to my annoying, rude neighbor why the U.S. supports Israel over Iran all in Portuguese. We speak ENGLISH in South Dakota, for crying out loud!

I've been praying about this problem for a while, and the thing that floats up to the surface of my thousand thoughts are this: seasons.

We are always moving and breathing and living in seasons. Life changes. Moods change. Pregnancy saps brain cells and productivity (so it seems for a lot of women)--especially when running after a three-year-old who is probably either trying to climb to the top of a huge feed tank, spray himself and everybody else with the garden hose, or ride our friends' chocolate lab like a horse. (Yes, all of those things actually happened, and recently).

Perhaps for me, the season to furiously write is passing. Fading. Melting into a season of quiet patience and reflection that I, having never been pregnant before, have never known.

Perhaps now is the time for me to put down my pen and my laptop and just watch my curly-haired son play in the afternoon sun, the gold of the light turning his hair glorious rusty brown. Perhaps now is the time to gather him up in my arms, all laughter and dirty knees and joyously kissable cheeks, and hold tight the little body that doctors once said might never walk or never talk, and praise the Lord for His mercies--for "they are new every morning."

Perhaps now is the time to fall on my knees in prayer for that same little one who is scheduled to undergo brain surgery once again next month--to fix that shunt that saved his life last year, now starting to malfuction--and thank God for every day of his life, and for protection and peace as we go through such a traumatic process all over again. And yet grateful that we, and not someone else, are called to the task.

Perhaps now is the time for me to close up my notebooks of half-baked ideas and circle my belly with my hands in wordless wonder. For who would have thought that after eight years of nothing, this womb would hold a child? A fluttering, kicking, healthy growing baby whose rounded head and limbs we watched, with rapt disbelief, on the fuzzy black-and-white ultrasound screen? I am not as old as Sarah (yet) but like her I laugh--and cry--at this miracle called life, and how it has been granted to me not once, but twice--to hold and nurture and give back to the Creator.

Perhaps now is a new season for me. A new dawning of responsibilities and priorities. An autumn of sorts, blooming out its golds and rusts before a quiet winter of birth and motherhood, and a family made four from nothing--like the inhabitants of Eden formed from earth and a single rib.

But what about writing? Will it vanish, too, like so many other things in my life?

"Life has its seasons," author Valerie Comer wrote to me just yesterday. "Sometimes it's okay to go with them... (Remember that) God has given you a gift as a writer and author. He hasn't removed it, but your body and brain are busy with other things right now. It's okay. It'll come back."

Just like green grass after winter snows, and tender shoots where the dried winter grasses lay cold and blond across the field. The clamor of meadowlarks and robins, and the lowing of cattle as spring-young calves leap in green pastures.

I know because I saw it; I lived it. We watched the frozen white fields and mountains of South Dakota turn gold and then green, and spring came once again.

Just as it will in a few short months.

For while our worlds change around us, our Lord will not. He is the rock immovable, the fortress that will never be shaken. "The grass withers and the flowers fall, but the word of our God stands forever."

He will not fail, and He will not fade. Just sa He transitioned me from missionary to international wife and then to mother and author, He will not forget me--or you. Our times are in His hands, and He alone holds our future.

And while season after season may shake our private thoughts and fears, we can hold fast to Him, knowing that He puts the words in our mouth and pen in our hand--and will bring everything in our lives to fruition to give Himself glory.

What season are you in now? Have you ever felt like you're in transition and out of control? What holds you in place when the world around you shakes?

Jennifer Rogers Spinola lives in Belle Fourche, South Dakota, with her Brazilian husband, Athos, and three-year-old son, Ethan. She has lived in Brazil for nearly eight years and served as a missionary to Japan for two years. Jenny is the author of Barbour Books' "Southern Fried Sushi" series and an upcoming romance novella collection based on Yellowstone National Park (also with Barbour Books). Her first novel, “Southern Fried Sushi,” was a Christy Award finalist in 2012. Right now Jenny is sharing her side of the bed with Charlie Broccoli and hoping Ethan sleeps a little longer this afternoon so she can put her feet up.
Posted by Jennifer Rogers Spinola