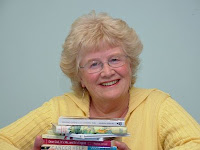 Over many years, I have been very blessed when reading books by a writer from England called Marion Stroud. Some of them are Gift books and became favourites to give to family and friends. Then when my husband and I were privileged to live in England ourselves for a couple of years, we went to an annual meeting in London of the Association Christian Writers and there she was, Marion Stroud in the flesh!
It wasn’t until we were actually back in Australia I discovered we had only lived a relatively short distance from each other. A few years later we found ourselves back again in England for a fairly brief visit. This time we did make contact and spent a lovely few hours at the home of this very welcoming, beautiful, generous and Godly woman.

Since then we have had contact via the internet a few times over the years and I am delighted she is now blessing us with posts on our ICFW Friday Devotions. Marion has now had twenty-one non-fiction books published, and three fiction books for children but in recent years has been attempting to write her first adult novel.

I’ve asked Marion to share a little about her current writing projects with us.


I was an avid reader as a child and always assumed that I would write children’s fiction. And indeed that is how I began, winning a competition  for a novel for 8-11 year olds, written by someone who hadn’t  had a full length novel for children published before. At the time I had a two year old and a baby, and when baby no. 3 arrived I wrote a second children’s novel – it seemed to work like that … perhaps because I didn’t want to get swamped by domesticity!
I got diverted from fiction when I discovered a need for a book for women who came to faith after marriage. Unable to find one, I obeyed God’s prompting and wrote ‘I love God and You’ even though both my husband and I were Christians before we got married. You can read the story of how that came about on my What If blog. That swept me into non-fiction and I started to get commissioned to write more non-fiction books as I identified needs that no one else seemed to have written about.


Every now and then I thought about returning to fiction, but there was always the next book waiting to be written. About 6 years ago I went to a conference which encouraged women to open their homes and their lives to others, focusing on friendship evangelism. On the Sunday morning, God and I had a conversation.

“What am I DOING here Lord?” I asked. “I’ve been to this conference before. I’ve spoken at it. I’ve even written a book about how to do it. Why have you brought me here this weekend?”

“FICTION and FUN? “ I couldn’t be hearing correctly! No British Christian publisher was handling adult fiction as far as I knew – they’d tried it and it hadn’t been a success. Christian women here just didn’t seem to read it. We were accustomed to borrowing fiction from our local library, and they didn’t stock CBA fiction. A few Christian bookshops did, but there seemed to be little desire to buy novels that weren’t culturally relevant.

And if I’m honest I was still suffering from the remark ‘Do you think all this writing and speaking you, do does any good?’ delivered by an aggrieved pastor’s wife who wanted me to do something in the church, and I had said ‘no’. Non-fiction books were slightly acceptable – they HELPED people – but novels? Very suspect in many British Christians minds [NB I don’t share that view but you get influenced by your Christian culture!]

I just couldn’t see how it could happen, and I was very busy nursing my very elderly Mum, so I pushed the thought onto the back burner. But every now and then I took a sneak peek at the US Inspirational market and played with some ideas in my mind. I even wrote the 1st four chapters of what I hoped might be my answer to God’s challenge, and entered the 1st chapter for the ACFW’s Genesis competition.

The judges hated it! My grammar was slated, my punctuation was declared a disaster area [did you realise that British and US punctuation differ?] and although one of the judges loved the characters, it was obvious that a book based in England was going to be a hard sell. Discouraged I decided that the only way to really study this market was to go to the ACFW conference. My agent appointment was with Etta Wilson from Books & Such, and she asked me to send her a proper proposal – and then retired! But she encouraged me to apply to the Agency for representation and as I had a non-fiction contract in the offing for a book of Prayers for women which had been commissioned by Discovery House, Mary Keeley took me on. 'It’s Just You and Me Lord' is due for publication in September.

So where am I now? ‘Rumours of Angels’ is still in my head and in my heart. And Satan is still whispering that age-old temptation into my ear ‘Hath God said …? Why waste your time writing something that will never be published when you could go on with the non-fiction?’

My answer to that is ‘God has spoken, and I have to try. Even if it doesn’t find a publisher I shall have been obedient. “And I love weaving stories once I get under way. So this summer I’m setting out to write ‘Rumours of Angels’ once more, spurred on by the fact that I’m meeting my agent, Mary Keely, at the Books & Such Authors Retreat in Monterey in October. And if any of you know of an effective way of knocking that pesky and paralysing ‘inner editor’ on the head, please let me know!

Thank you so much for sharing, Marion. We look forward to reading more of your devotional thoughts with us here on Friday Devotion posts from time to time. 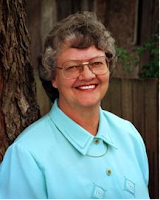 A Queensland farmer’s daughter, she became a registered nurse before going to Bible College. She and her minister husband have three adult children and six grandchildren. They have enjoyed over 47 years of ministry including church planting in Australia, two years in England, three short term mission trips to Africa and now live in Tasmania, Australia's island state. Her 19th title, Justice at Baragula was released May, 2011 and was a CALEB fiction finalist in 2011.
(And yes, this is Mary - just an older photo!)
Posted by Mary Hawkins