In my last post I covered my encounter with Buddhism. Today, I would like to describe my experiences with the Silva Method (also called Silva Mind Control).

The Silva Method was developed by Jose Silva back in the 1940's as a means of increasing the IQ of his children through relaxation, visualization, and the activation of higher brain functions by inducing "alpha" brain-wave activity. His idea was that most people use the left, or logical, side of their brain almost exclusively. By learning to us the right, or creative, side, he believed it would be possible for people to gain access to information stored in their subconscious. The end result was Silva Mind Control, which he started marketing commercially in the 1960s.

I was nineteen when my wife (then my girlfriend) and I attended a Silva Mind Control seminar over a weekend. I had just finished the end of my second year of Psychology. I was intrigued by the human mind and how it works, particularly with regarding to memory, learning, and the possibility for extra-sensory capabilities. The claims of the Silva Method caught my eye. They seemed to fit in perfectly with my interest in meditation and my quest for self-improvement. I asked my wife to join me on a two-day course. She was a little hesitant, but agreed. At that point she was a Christian but, through negative input from significant others earlier in her life, not a practising one.

We arrived at the hotel and were directed to the conference room. The curtains were closed but it was still light and airy. Twenty or so chairs were fanned out across the floor in a rough semi-circle facing the low stage where a friendly-looking man greeted us with a warm smile. We found two places at the back and got comfortable on the big reclining chairs. Nobody spoke, but everyone seemed quite relaxed. It was a pleasant atmosphere. After fifteen minutes, all the seats were taken.

During the two days of the course we were led through the steps necessary to unlock this hidden potential, starting with learning how to relax through meditation. We then progressed on to visualization exercises, which I enjoyed tremendously. The course leader compared our minds to a team of wild horses. To think clearly, he said, we needed to bring that team of horses under control. This was all harmless enough. We sat on our comfy chairs, imagining everyday objects floating in front of a white screen in our minds.

On the second day, however, things took a surprising turn. For this session, we had been instructed to bring along information on two people we personally knew who had an ailment of some sort. We filled in a form for each person, stating their age, gender, and what the ailment was. We were to keep these forms on us and not show them to anyone. We were then told to partner up with someone in the seminar that we did not know. While one meditated, the other would ask questions. During the exercise, the one meditating was to visualize each of the two cases brought along by the other person. We had to picture each "patient" standing on a plinth, and try to "see" what was wrong with them.

I partnered up with someone I had seen but not actually spoken to. I sat on the recliner chair while he sat on a stool next to me, almost like a psychologist and patient. I did my relaxation exercises and said I was ready to proceed with trying to "diagnose" the two people on the forms he had brought along. I started with the first. I was told it was a woman, middle aged. As instructed, I visualized a middle-aged woman standing on my imaginary plinth. I rotated her in my mind, trying to "see" something wrong. My first two guesses received a quiet "try again" from my partner, which meant I had guessed incorrectly. I looked harder, wondering what on Earth I was supposed to be seeing. Then I saw a big black spot behind her left knee. I mentioned this, expecting to hear the usual "try again". Instead, there was a slight pause, followed by a mildly surprised "yes, that's right." Afterwards, as we reviewed the two cases, my partner said that the one woman had a bad varicose vein behind her left knee, exactly where I had seen it. When the exercise was finished and people shared their results, many of the others also reported correctly diagnosing one or more ailments.

Buoyed by my success, I was keen to see what we would be doing for the rest of the day. For the next exercise, we were instructed to enter a meditative state and "build" a workshop in our minds. It could be anything we wanted. The important thing was that the room should have two doors. We were then told to imagine the doors opening, one at a time, to reveal two "helpers". The idea was that, in order to access subconscious data, we could employ these helpers. As figments of our imagination, they would be better placed to access those parts of our brain that are normally out of reach of our conscious minds.

It sounds crazy, I know, but what harm is there in using your imagination in a creative way, right? After all, as a writer, I imagine characters all the time. I am constantly dreaming up new people and places and scenarios. Later, when the group compared notes, everyone seemed to have no problem imagining their assistants. They described them in great detail. Hair, eyes, facial features, clothes, and voices. I was able to imagine two people but, for some reason, could not see their faces. Try as I might, I could not put a face to my imaginary helpers. During this discussion, my wife became withdrawn and added little to the excited chatter. Only later did she tell me that she had been unable to imagine anyone coming through those doors. She told me she was embarrassed at having "failed" that part of the course.

Years later, after I became a Christian, my wife and I discussed that course. In particular, we talked about her inability to see her helpers and, to a lesser extent, how I could not put faces on mine. We believe that it was God protecting us. As a Christian (albeit a non-practicing one) she was under God's spiritual protection and He would not allow her to unwittingly open the door to demonic influences. As for me, we think that God knew I would one day accept His gift of redemption, and so I was also protected. The other big question we discussed as: how was I able to see the black spot on the back of the woman's knee? Very possibly it was just a coincidence. I guessed incorrectly twice before getting it right and I was way off on the other case. But many others managed to guess correctly. One woman got both her cases right first time. Where did this information come from? Was it some sort of extra-sensory perception, or did it come from the spiritual realm? We suspect the latter.

Like so much in the New Age, the slope away from God is a slippery one. It starts out with something harmless but before long you are sliding quickly towards a dangerous pit. The Silva Method starts out with harmless relaxation exercises, then meditation, then simple visualisation. This all appears harmless enough but then, before you know it, you find yourself inviting unknown beings into your life. Skeptics and atheists will say that it is all just imagination, that it is harmless, but as a Christian I believe in a spiritual realm inhabited by beings that are waiting for any opportunity to pull you away from God's protection.

More disturbing, however, is a practise I have seen among some young Christians recently, in which they visualize a room with a door. They then imagine Jesus walking through that door. The aim is to "invite" Jesus to come and help you. They believe that, by imagining Him, they can have instant access to Him for answering prayers or even just to talk. But, for me, as someone who has seen how the New Age works, I see this as a dangerous practice. Jesus cannot be summoned in this way. He hears all our prayers, but invoking an image of Him in your head is inviting trouble. I believe God protects us from unwitting errors, but the Bible is clear about the dangers of divination.

In Deuteronomy 18;10,11 it says:
There shall not be found among you any one that maketh his son or his daughter to pass through the fire, or that useth divination, or an observer of times, or an enchanter, or a witch. Or a charmer, or a consulter with familiar spirits, or a wizard, or a necromancer.

The Merriam-Webster dictionary defines divination as : the art or practice that seeks to foresee or foretell future events or discover hidden knowledge usually by the interpretation of omens or by the aid of supernatural powers.

Indeed, the word "occult" is defined as: matters regarded as involving the action or influence of supernatural or supernormal powers or some secret knowledge of them. 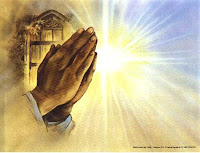 Like so much in the New Age, the Silva Method starts out harmlessly enough and can even have the appearance of godliness, but it can soon ends up with dabbling in the occult. The warning signs can be subtle but we Christians need to be careful and keep a sharp eye out. If we are not sure about something, we should ask God for guidance. And check it out in the Bible. It's all in there.

Matthew 10:16: Behold, I send you forth as sheep in the midst of wolves: be ye therefore wise as serpents, and harmless as doves.

Jeremiah 7:24 But they hearkened not, nor inclined their ear, but walked in the counsels and in the imagination of their evil heart, and went backward, and not forward.

2 Corinthians 11:14 And no marvel; for Satan himself is transformed into an angel of light.

1 Peter 5:8 Be sober, be vigilant; because your adversary the devil, as a roaring lion, walketh about, seeking whom he may devour

Next time: my brief encounter with Scientology