Wandering Wednesday | Researching The Songbird and the Spy 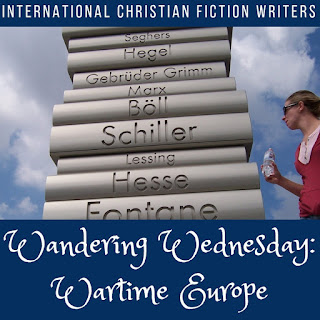 You know it when you read it. That certain something that you can’t quite put your finger on, but there it is, sparkling off the page to dazzle you into another realm. A whisk across a sun swept beach, a medieval castle filled with crumbling stone, or bouncing along the front lines in the back of an ambulance. You close the book and realize with a start that you’ve been sitting on your couch in sweat pants the whole time.

That, my friends, is research done right.


Research is my absolute favorite part of the writing process. I love reading all the details I can and finding ways to incorporate them into a story. For The Songbird and the Spy I stepped back in time when fear ran rampant under Nazi terror and ordinary (and not so ordinary) people fought back.

France was a natural choice because it was central to much of the fighting and occupation, and having lived in Europe for several years I was fairly familiar with the land and cityscapes. I’ve walked the cobblestone streets of tiny villages and seen the remnants of bullet holes in the garden walls. I’ve smelled Paris in the springtime while walking along the Seine, and strolled across Trafalgar Square with the big lions.

My American ideals of convenience have been stopped short when shops close down for people to enjoy long lunches at the local café. Taking all of these experiences with a dash of imagination thrown in, I was able to create the most realistic world I could for Claire and Michael to inhabit.


Remember I mentioned living in Europe?


I was stationed in Germany while a member of the Air Force. The military is a world in and of itself with its own language, dress, and code of behavior. Having left the service only months prior to writing Songbird, the lessons of four years were still heavily ingrained in me and were put to good use in Captain Michael Reichner, epitome of the dutiful soldier.

I’ve worn a service jacket with a hidden clasp rubbing against my neck while standing in open ranks. I’ve low crawled through mud under barbed wire, and stayed up late polishing boots to a high shine. And who but a fellow military member understands the significance of using baking soda to rub sweat stains from the inner rim of a cap (or in military speak a cover)?


Now, before you think I’m only here to brag about my own experiences, know that I would be desolate without books, online articles, and movies. Movies offer a visual consumption of the times gone by and allows for a writer to see all the details of clothing, hairstyles, living conditions, etc.

It’s a total immersion that I do my utmost to relay to readers.


When it comes to books and articles I try to read everything I can get my hands on. Firsthand accounts, battle plans, ration card descriptions, musical preferences, and even the weather patterns for that year.

These are what give insight to characters. Who they are at their core because of what is going on around them. It was terrifying to step inside the head of a Nazi like Ilsa, but as a writer I had to understand why she thought the way she did so that my hero and heroine would understand why it was so important to defeat her, and by her the ideology of the Nazis.


No detail is too small because those are what make a story and the characters who inhabit it come alive. Is it difficult to read about occupied lands under Nazi rule? Yes. I can’t tell you the number of times my heart broke over what was done to the citizens and any person who stood against the tyranny.

But in the ashes of sorrow rose the spark of hope.


One flash of light sprang to ignite another, and then another until the fire of resistance set the world aflame and good triumphed. That is the essence of what I hoped to capture.

If I can but relate any of these details, even if I’m the only one who notices them, then I consider the story a success. Hopefully, readers will learn something they didn’t know before while wrapped in the delights of fiction.

Believing she was born in the wrong era, J’nell Ciesielski spends her days writing heart-stopping heroes, brave heroines, and adventurous exploits in times gone by. Winner of the Romance Through the Ages contest and Maggie Award, J’nell can often be found dreaming of a second home in Scotland, indulging in chocolate of any kind, or watching old black and white movies. Born a Florida girl, she now calls Virginia home, along with her very understanding husband, young daughter, and one lazy beagle.

You can find J'nell online at:

About The Songbird and the Spy

As shells explode over Nazi-occupied France, American music student Claire Baudin is trapped behind enemy lines, struggling to protect her identity. Singing as a barmaid while she plans her escape, a handsome Third Reich captain threatens everything she knows to be true about the enemy.

Nazi Captain Michael Reiner isn’t who he claims to be. A British language expert turned spy, he discovers the truth about Claire, but he knows the importance of a secret. Struggling to resist his attraction to the songbird, he’s determined to complete his assignment, no matter the cost. His cover is threatened when a ruthless female Gestapo officer arrives hunting Resistance fighters. The raid forces Michael's hand: complete the mission or save Claire.

As the war threatens to tear them apart, they must rely on each other for survival. Is there hope—and a future—for an American songbird and a British spy?

You can buy The Songbird and the Spy at Amazon.