My Home, My Setting


Reindeer food, snowy forest scenes and lakes, golden domes and spires, colorful ornate churches, a pink padlock embellished with hearts on a bridge filled with lovers' padlocks, nesting dolls and fancy shoes fill my laptop screen in turn as my friend shares some of the sights of her holiday in Finland and Russia with me. I can only imagine the sounds, smells, aromas, flavors and textures that surround her and fill her senses. Wonderful experiences which will translate into exotic settings in her novels in days to come.

And here I sit in my house in South Africa. Same old same old, as we say here—nothing new or interesting to use in my books.

But if I stop and think about it, I realise that's not true. Although so familiar to me, my surroundings are interesting and different to that of many readers living in other countries.

I take for granted the single layer of glass in my windows which allow sounds to be heard indoors. When a Scandinavian visitor to the country first arrived and heard the birds outside, she asked in alarm what the noises were that she could heard. It was a totally new experience for her as the double glazed windows and paucity of birds in her home city meant no outdoor sounds penetrated the rooms of her house.

Bird song and calls are an integral part of my life. At night I sometimes hear the soft hoo-huuu of a spotted eagle owl or whi-whi-whi-WHI-WHI-WHI-whiwhi of thick knees as they go about their nocturnal business. I wake to the sound of dinosaur-like birds (hadedas) shouting raucously in the sky, accompanied by twittering of garden birds and the cooing of doves. During the day I often hear crested barbets trilling away and sounding for all the world like old-fashioned telephones ringing. The gray lourie or "go away bird" orders me to "Go-waaaaaay".

And it's not just the birds which make my garden unique .It's also the sound of the weather, especially our amazing Highveld thunderstorms. The day can be bright and sunny without a cloud in sight, and suddenly the sky darkens and before you know it, rain comes lashing down and pounds on the windows so loudly that  you cannot hear the TV even with the volume turned up. Sometimes hail attacks the windows too and adds to the cacophony. We jump out of our skins at loud cracks of thunder. Through the windows we see the street awash with water so that it appears to be a river. But half an hour later the sun is shining again, the river has disappeared and steam rises from the surface of the street.

I thought storms were like that everywhere until I went to Ireland. Thunderstorms are not as common there, but there's plenty of wind and rain, and often for days on end. As I stood in my sister's house looking out of her double glazed windows, I found it really strange to see the trees bent over with the force of the wind as the rain ran down the windows—but there was no sound, the world was on mute! And the sun did not shine at all. The day was dull and cloudy with none of the exhilaration of a South African thunderstorm.

Another thing that I love about living here is that there is that the Klipriviersberg Nature Reserve is a only short drive away. It's a unique experience to walk there as wildlife roams free. On one early morning hike, our group of hikers was greeted with the forms of several zebra rising up out of the mist by the ruins of an farmhouse. We passed so close to them that we could hear them chewing.

Later as the sun rose we spotted wildebeest and several species of buck. Birdlife and wild flowers abound and delight visitors.

And so I have come to realise that my surroundings are unique and interesting, in fact they make the perfect setting for my characters!

I'll end on a visual note with photos of some of the wild flowers in the reserve. 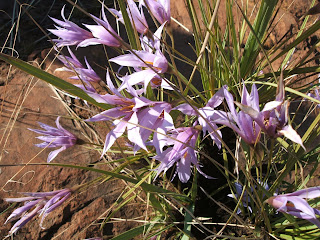 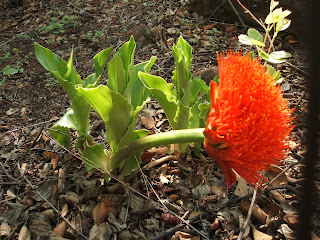 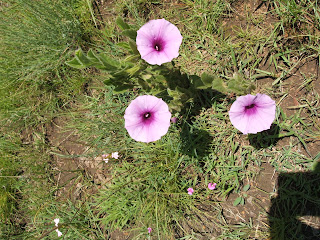 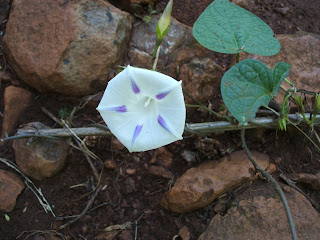 Now over to  you. I'd love to hear where you live and what makes your surroundings unique? Can you use the world around you for the setting of your novel? 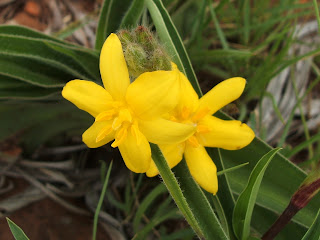