Is It Really Possible To Do It All? - Kara Isaac 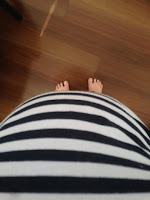 As I write this, it's six months to the day since the release of my debut novel, Close To You, two weeks from the US release of my sophomore novel, Can't Help Falling, and three days from it releasing in Australia and New Zealand. I'm also a week from finishing up at my "real" job and five weeks (give or take) from the arrival of our third child.

From the outside, it probably appears that I "do" it all. In fact, that was what someone asked me recently what the secret was to juggling the books with the day job with the pregnancy with the two preschoolers, with the husband in ministry etc. etc? The secret is pretty straightforward: no one one really does it all, it only just looks like it. I certainly don't come even close to doing all of anything. Just ask my kids how many times they've had cereal for dinner in the last six months!

There are however a few things that I have learned that have helped my family make it through the last two years with an author/working/deadline stressed/pregnant mum :)


Work Out What You Can Outsource
I hate cleaning. I find zero joy in spending any time on my days off scrubbing showers and cleaning toilets. We found out that a book contract was on the cards for me about four weeks after I returned to work after having our second child. It became quickly apparent that, when writing, editing and marketing books under deadlines and contract got added into the mix there weren't enough hours in the day to do everything that was going to have to get done. So we made the decision to pay someone to come and clean our house for three hours a week. For us it has been more than worth the financial cost to not have dealing with shower scum lurking on our "to-do" list every weekend and freeing us up to enjoy the time that we do have on doing things as a family.

And it doesn't have to be a financial cost. I have friends who are on tight budgets but who trade babysitting, cleaning, teaching a musical instrument and other activities.

Know When Crunch Times Are Coming
My husband is an extrovert. We worked out pretty quickly that me telling him that our social lives were about to be voided for a month because I was on a deadline wasn't going to make for a happy household. So in as far in as advance as possible when I knew I was coming up to needing to go into writer hibernation mode I would put it in his calendar. That way he knew he should make plans that didn't involve me which ultimately meant he got to see lots of movies with his guy friends that I never would have wanted to see anyway!

Don't Even Bother With What Isn't Mission Critical
As writers, there are now endless different channels where people say we should be trying to build our platform. Facebook, Twitter, Instagram, Pinterest, Google+ etc. Would I love to do all of those things well? Yes. But the reality is that I have time to do about two as well as my email newsletter and blogs I'm committed to. So I went with Facebook and Twitter and focussed on having a consistent presence there. If I get home time while I'm at home with our newest addition (HA!) I may dabble in another one but, for now, doing two as best I can is preferable to doing three very badly.

Don't Be Afraid to Ask For (and Accept Offers of) Help!
About a month ago I got sick. Ordinarily I would have dosed myself up and cold and flu medication and soldiered on. But since I was pregnant I wasn't allowed to do that. All I could have was Panadol and all I was in any condition for was staying in bed. It was only for a few days but it was at a point in time when I had a load of things due for promotional activities for Can't Help Falling and my husband was really busy at work. As much as I wanted to insist that we would cope, the reality was that I couldn't. Friends in my hometown stepped in to help look after children and feed my family while virtual friends helped review and polish promotional material that I wrote in a muddle headed feverish haze.

So let's chat. What helps you to keep all the balls up in the air during crazy busy times in life? I'll be giving away the winner's pick of a copy of Close To You or Can't Help Falling to one commenter. Make sure you leave a contact email address if you'd like to be in to win! Entries close midnight Saturday (CST). Void where prohibited.

Kara Isaac lives in Wellington, New Zealand. Her debut romantic comedy, Close To You, is about a disillusioned academic-turned-tour-guide and an entrepreneur who knows nothing about Tolkien who fall in love on a Tolkien themed tour of New Zealand. Her sophomore novel, Can't Help Falling, is about about how an antique shop, a wardrobe, and a mysterious tea cup bring two C.S. Lewis fans together in a snowy and picturesque Oxford, England. When she's not working her day job as a public servant, chasing around a ninja and his feisty toddler sister, she spends her time writing horribly bad first drafts and wishing you could get Double Stuf Oreos in New Zealand. She loves to connnect on her website, on Facebook at Kara Isaac - Author and Twitter @KaraIsaac

Email ThisBlogThis!Share to TwitterShare to FacebookShare to Pinterest
Labels: how do I find a balance, Kara Isaac