Learning to say ‘No’

One of the most valuable pieces of advice I was given as a new Christian was the importance of learning to say ‘no.’ My mentor went on to explain there will always be jobs that need doing and usually more jobs than people willing to do them. But.... if it is something God is not calling you to do and you take it on, firstly you won’t do as good a job as you ought and secondly you could be depriving the person who would be excellent in that position from doing it. While ever someone is doing a job, others can be often hesitant to volunteer.


Sometimes after prayer I have felt God calling me to a task I may feel ill equipped for. When this happens, I’ve found if I trust Him, He enables. Other times after prayer, I‘ve said ‘No’ to those things I don’t feel God is calling me to. But it is not always easy. People seem to have a problem with the word ‘no’ and want reasons why we don’t want take on a task or do something. We should be able to be honest with friends and acquaintances but it seem to me some people don’t handle honesty well.
My husband is a great one for no excuses, no apologies. He simply says ‘no.’ As he reminds me and as writer Anne Lamott also says in one of her books ‘No is a full sentence.’


But then people look at you and wait for explanations as to why, or worse still try and change your mind and tell you why you’d be so good at it, or why you’d enjoy that activity. Sometimes they may even pressure you by telling you ‘there is no-one else.’ I don’t believe that. If God has a task that needs doing, He will raise up the right person to do it.
Years ago my husband were involved in Sunday school and had been for many years. After our daughter was born and was around twelve months old, it became quite hard to get to church in the evening when she was tired. We were both teaching Sunday school in the morning. Rather than one go and one stay home with her, we decided the time had come to take a break from Sunday school teaching. We came in for a lot of criticism from one person.  However, our attitude was God was calling us out for a time and He would raise up others to do the job. And He did. After we stepped down, they ended up with more teachers in our section than they had ever had before.  You see, what this critical person forgot was, it is God’s work and God provides. But sometimes it means other people need to get out of the way and leave a vacancy for Him to fill.


Even in everyday situations that don’t involve ministry, saying 'no' can present problems.  A writing group I was involved in planned a day long craft day. While everyone sounded excited, I declined whereupon people insisted on telling me how I would love it etc. And anyone could do it.  I still said ‘no.’
Craft and me, do not belong in the same sentence. A day of craft related activity to me is a not relaxing but torture. Writing yes but, not things like any form of visual art, needlework, knitting and crochet, etc.  I admire those who do them and produce beautiful works. But they are not for me.


When younger, I spent a lot of time trying to make myself do such things because people expected it.  Now I no longer bother trying to make myself something I am not, but concentrate on those things I can do.
Should I make excuses as to why I can’t or don’t want to participate? To me that is dishonest. I’d rather be upfront and say 'while I realise it appeals to others, it is not my thing.' In that I am like Abby in Streets on a Map. But where her life revolved around singing, mine revolves around serving God in the ways I can, and yes that includes singing but only at church and bible study, husband and family, and writing. When it comes to relaxing, activities include, reading, crosswords, live theatre and watching footy. Have you noticed something? Apart from the footy they are all word related activities.


So how do you handle it when people ask you to take on some ministry you don’t feel called to? Or they invite you to participate in an activity you don’t enjoy? Do you make excuses?  Do you suddenly invent another engagement on that day, if it’s something you want no part of? Or do you honestly tell them it is not your thing but you’d be happy to spend time together doing something you both enjoy? I’d love to hear your thoughts. 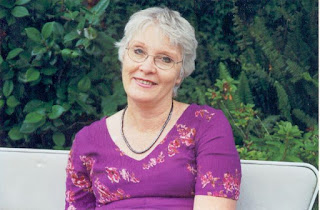 Streets on a Map, Dale’s latest novel was published by Ark House Press. Prior to that, Dale has had seven children’s books and Kaleidoscope a collection of poetry published. Many poems in Kaleidoscope have been previously published in Australia’s literary magazines. She has also written bible studies and Sunday school lessons.More information about Dale can be found at www.daleharcombe.com or on her Write and Read with Dale blog http://www.livejournal.com/users/orangedale
Posted by Dale