There's just no good way to end that sentence, is there!

ACFW conference in Dallas back in September provided several highlights for me.

Plenty of workshops and appointments aided in helping me figure out how to build the platform that will work for my writing, as did the keynote address by Michael Hyatt.

This was my fourth conference so hanging out with friends is also a major focus for me. And this time, much of the fun lay in meeting our Beyond the Borders group (any ACFW members from outside the USA), some of which are familiar names on this blog. We had breakfast together two mornings. Here's a photo from one of the days: 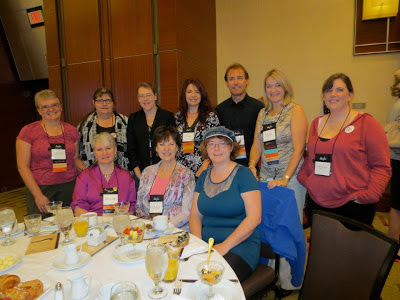 Cathy and I figured out early on that our flights left from the same terminal at a similar time, so we arranged to meet and head over together. Getting through security didn't take long. We found we had plenty of time for lunch and had just settled into a "window" booth at TGIF when we saw Kara walking by. Of course we waved her in! 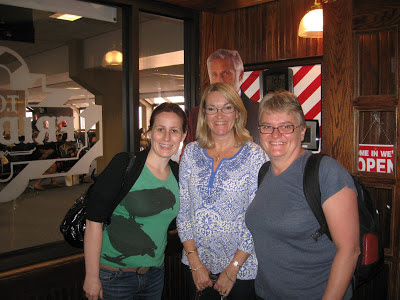 With all the sleepless nights and the stress of pitches behind us, we formed quite a giddy threesome that somehow forgot to request our bill be divided up. No doubt the waitress would have refigured the amounts, but we decided we could handle it. Kara, being from New Zealand, had little need of her remaining American dollars. I live near the USA border so can always use cash, but wanted to use up some. Cathy goes to the States the most often, but didn't have small bills. We wound up spreading out our collection on the table as we redistributed funds until we had the right amount for the waitress (with a tip, of course) from each of our wallets.

I hadn't laughed so hard in a long time. 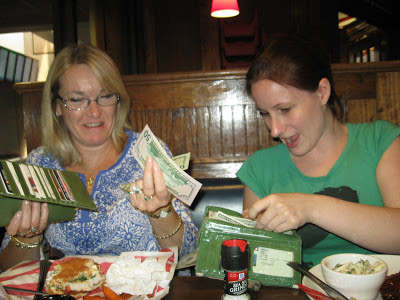 The moral of this story? There probably isn't one, unless it's that hanging out together outside of "regularly scheduled activities" can bring tighter, faster bonding than within the confines of conference, and certainly more quickly than email loops only.

If you get the chance to attend a writing conference, whether it be a large one such as ACFW or a regional venue close to home, be sure to schedule time away from the schedule to get to know people. It's totally worth it.

Three foreign authors walked into a TGIF. They ate, they laughed, and they parted as closer friends than when they went in. The end.

Her first published work, a novella, was released in the collection Rainbow's End from Barbour Books in May 2012. Visit her website and blog to glimpse inside her world.