FRUSTRATED? WHY? It's all so easy. 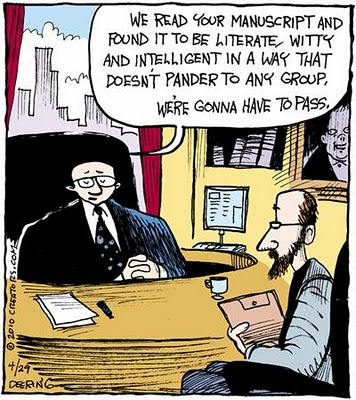 Yes, occasionally / mostly / often, we writers possess this attitude, sometimes with a vengeance!

Literary agent Rachelle Gardiner received some interesting comments from readers of her blog. They follow:

1. Frustrated at finding the right audience.
2. Frustrated with the marketing side of it. To her it feels so much like a waste of time when she'd rather be writing.
3. One had two agents answering her query saying it was great, but they'd pass.
4.One multi-published author had six different manuscripts out to publishers who asked to see them......several months ago! And still no word.
5. One very frustrated fellow said genres have become restrictive requiring square peg stories to be hammered into round genre holes! He wanted to be able to read a story that sweeps across the literary landscape going wherever the story takes it. Umm, a little like the frustrated author in the cartoon?

What frustrates you most about the whole rigmarole of writing the book, finding an agent, sending in the proposal, then having to market the book you know the whole world wants to read? Aargh!!!
But we are writing faith-based fiction aren't we?
The following encouragement is from Karen Ball of the Steve Laube Agency:

A woman went to visit her mother, telling her how discouraged she was, how weary of all the struggles in life. The mother took her into the kitchen, set three pots of water on the stove, turned the heat on high. In one pot she put carrots; in the second, she put an egg, in the last, coffee grounds. After about 20 minutes, she turned off the heat, fished out the carrot and the egg, and asked her daughter to what changes had taken place.
“The carrot’s all soft and squishy,” the daughter said, “and the egg is hard boiled.”
The mother then poured the water from the coffee grounds into a mug, and had her daughter sip it.
“What change has taken place?”
The daughter smiled. “The water’s been changed into a delicious coffee.”
The mother put her arm around her daughter. “So then, we have a choice when the heat is on in life. We can grow soft and squishy, like the carrot, or hard inside like the egg. Or we can be like the coffee grounds, and change the water around us into something rich and refreshing.”
Let’s give that a try, friends. Let’s let God use the hard times, the discouragements and frustrations, to refine and perfect us.

* Rita Stella Galieh, author of two published full length novels, is learning to overcome frustration in her attempts at finding comparable books in a requested proposal. Does anyone else find that an easy task? Apart from ACFW's Fiction Finder and AMAZON, where else can you find such things?
Posted by Rita Galieh