Review: Falling for the Farmer by Narelle Atkins plus book giveaway

Kate Lawson is standing at the back of the church in Sydney, Australia. The bridal march has begun. She sees her groom's triumphant grin as he awaits her.

She can't go through with it.

She drops her father's arm and bolts for the rented Cadillac driven by her maid of honor's brother, Jack Bradley, and begs him to take her far from the church.

From reluctant bride to runaway bride, Kate can't believe she actually stood up to her mother. She quails at the drama she's unleashed, but there's no going back. Not to Rodney, not to her mother…and not to the apartment or job she'd already given up. What will she do?

She escapes Sydney with Megan, her maid of honor and best friend, who is heading for a ski instructor job in New South Wales, a few hours' drive from Sydney. Kate's mother won't be looking for her there.

But as luck would have it, she crashes her car on the snowy roads near Jack's farm. (Remember Jack? Megan's brother?) Megan goes ahead to her job, but Kate must wait for repairs. Jack's aunt takes her in and Kate offers to help out around the orchard. What Jack really needs is someone to untangle his bookkeeping, so Kate takes that on as the mechanic awaits parts for her car.

Sooner or later, though, Kate must come to grips with her hasty retreat. Rodney—and Kate's mother—will forgive her if Kate agrees to the marriage after all. But how can she, when she's now falling for the farmer and discovering what love really is? 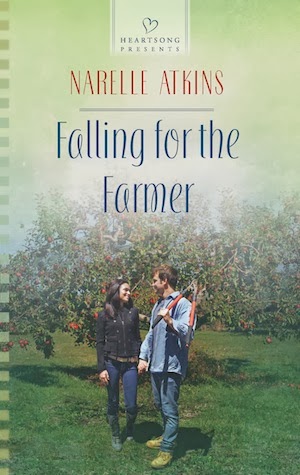 Falling for the Farmer is the debut novel of our own Narelle Atkins. When the gates to publishing opened for Narelle, a slew of contracts poured into her deserving hands from Heartsong Presents.

The short word count of Heartsong novels doesn't leave a lot of room for story development, but Narelle kept secondary plotlines to a minimum and focused on the budding romance between Kate and Jack. The issues of Kate's wounded heart, the push-and-pull between farm and city life, and Jack's own insecurities all play out against the backdrop of an organic apple orchard in the Australian hills.

This setting was the tipping point for me in requesting an advance review copy of Falling for the Farmer. I live in an apple-growing area of Canada and was interested in the similarities and differences between the two countries' orcharding practices. I may have come for the setting and for Narelle, but I stayed because of the enchanting love story of Kate and Jack.

Book Giveaway: By leaving a comment on today and/or tomorrow's post, readers can enter the drawing to win a print copy of Falling for the Farmer. The book giveaway is worldwide and includes Mary Hawkins’ interview with Narelle Atkins on the blog tomorrow.

Readers can gain two entries in the drawing if they comment on both today and tomorrow’s posts. Entries close on St Valentine’s Day, Friday, 14th February, and the winner will be announced on Sunday, 16th February in the Sunday Edition. Please leave an email address [ ] at [ ] dot [ ] where you can be reached.

Valerie Comer's life on a small farm in western Canada provides the seed for stories of contemporary inspirational romance and farm lit. Like many of her characters, Valerie and her family grow much of their own food and are active in the local food movement as well as their church. She only hopes her creations enjoy their happily ever afters as much as she does hers, shared with her husband, adult kids, and adorable granddaughters. Visit her website and blog to glimpse inside her world.