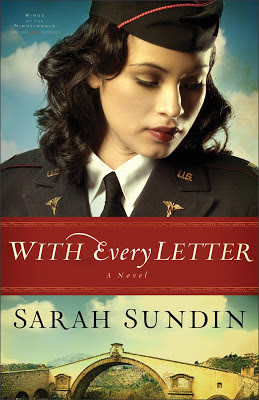 It's my pleasure to welcome Sarah Sundin today to chat about her new book With Every Letter - a historical romance based in Africa. This is the first book in her new Wings of a Nightingale series which follows three flight nurse friends as they work in various exotic locations during World War II.

With Every Letter, the first book in your new Wings of a Nightingale series, is mainly based in World War II Africa. What was it that attracted you to write a book based in Africa?

When most Americans think of World War II, they think of Normandy and the drive through France into Germany, but most are unfamiliar with the war in the MTO (Mediterranean Theater of Operations). In fact, Americans fought in North Africa, Sicily, and Italy long before the Normandy landings—and the lessons learned on the shores of the Mediterranean were vital to success in western Europe. I also picked North Africa because it was the first combat theater in which flight nurses participated in medical air evacuation, so the series can follow air evacuation from its clunky pioneer beginnings to efficient maturity. And of course, the settings! North Africa, Sicily, Italy, southern France—I love to play tour guide for some of the most exotic and romantic locations on earth.

Have you ever been to Africa? How did you research the various locations that Nellie and Tom are based at?
No, I haven’t. Many of the countries in this story are closed to tourism and many of the sites (primarily former military airfields) are in remote locations. Plus my research budget is limited. We did visit southern France and Italy, which I call “suffering for my art,” but did not get to Sicily or Africa. So I read as much as I could—I read about each region’s culture and climate and food and clothing. I read firsthand accounts of American soldiers in North Africa, which provided colorful details plus how a typical 1942 American boy reacted to these exotic places. And I located maps and pictures on the internet. Google Maps, particularly the “man on the street” function, helped me greatly. I was thrilled when a missionary friend of mine, who spent two years in Casablanca, said the scene set in that city was just right. Whew.

What inspired you in terms of creating the characters of Tom and Mellie? Will we be seeing them again in the rest of the series?
Tom was inspired by a newspaper article I read about a man facing execution who was leaving behind a young son. I wondered what life would be like for that boy, growing up in the shadow of his father. So Tom became the son—and namesake—of a notorious murderer, a young man who has spent his life showing the world he’s not his father, afraid to reveal the real man inside. Mellie was inspired by missionary kids who came to my Sunday school class—too blond to really belong in Africa and too exotic to belong in America. So Mellie became a quarter-Filipina, the daughter of a globe-trotting botanist, who has never fit in anywhere. These two misfits find acceptance in their anonymous correspondence. Yes, Tom and Mellie will be side characters in the remaining books in the series. There might even be a wedding at some time…

What other exotic locations do you have planned for this series? Can you tell us anything about the next book?
The second book, On Distant Shores (August 2013), follows the Allies through Sicily and into southern Italy. Scenes take place in Pompeii, Anzio, Naples, and at the ancient Greek temples in Paestum—sites I was privileged to visit. The cover for On Distant Shores shows Vesuvius and Pompeii—and the photo was taken by my husband on our vacation! The third novel (August 2014) will follow the Allies through Italy to Rome, and then to southern France. There are also a handful of scenes in Burma and India as my pilot hero goes there on “Temporary Duty.”

What is your writing day like? How do you balance being an author, a Mom, a wife and everything else you have going on in your life?
My children are now 14, 17, and 20. The oldest is away at college (sniff), and the younger two are in high school, so I have more hours to write now. I do most of my writing while they’re in school, and some more when they’re doing homework in the afternoon. I can also do writing-related tasks on my laptop at the karate studio, the doctor’s office, or in front of the TV in the evening. I’ve also learned to set priorities, trim what isn’t necessary, and say no to “good” activities that aren’t the best use of my time.

To celebrate the release of Sarah's new book I'm giving away a copy on my personal blog so pop on over there and leave a comment by midnight Friday to be in to win. International entries welcome **void where prohibited**

Kara Isaac is a proud Kiwi who recently celebrated surviving one year of parenthood. When she's not writing romantic comedy, she spends large amounts of her "spare" time trying to convince her toddler not to lick electrical sockets, pull crockery out of cupboards and to wear clothes. She can be found on Facebook at Kara Isaac - Writer or on Twitter @KaraIsaac