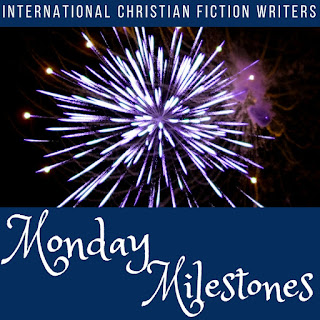 In Monday Milestones, members of the Beyond the Borders zone of American Christian Fiction Writers share their latest achievements.

Click here for more information on joining American Christian Fiction Writers. In case you were wondering, Beyond the Borders covers all members outside the USA—there are almost 100 of us, from over a dozen different countries.

Onto our Monday Milestones!

Kara Isaac won the 2018 RITA Award from Romance Writers of America for Romance with Religious or Spiritual Elements. Congratulations, Kara!

Grace in the Shadows by Christine Dillon

Christine Dillon (Taiwan) has released Grace in the Shadows, the sequel to Grace in Strange Disguise.

Physiotherapist Esther has survived cancer, but wounds within her family remain unhealed. Is her revived faith the reason for the rift or could a simmering secret be the root cause?

Cosmetics consultant Rachel buried her past - and her father’s God - but the past refuses to stay buried. Will she continue to run or is confronting her pain the way to freedom?

One collision course with truth.

Can God’s grace shine even in the darkest of shadows?

Return to Baragula by Mary Hawkins

Return to Baragula by Mary Hawkins (Australia) has been re-released by ForgetMeNot Publishing.

When overcome by being alone with the man she loved on the romantic beach setting, teenager Emily Parker failed to keep her promise to God never to make love until married. She never dreamed how it would impact her own life and the lives of many others. Six years later, despite the hateful way she’d been treated there, she has to return to her home town, but discovers that Matthew Davidson, the man she’d yielded to, is now the local doctor.

While Emily’s faith is now weak, even believing God can no longer love her, Matthew’s life has changed since he committed his life to Christ. However, now he has to deal with all the consequences of his actions with Emily. When he becomes ill and is still weak when disease attacks the community, Emily, a registered nurse, has to help him. But danger from her life in the city has followed her, and now also threatens her family. Through it all, will Matthew and Emily’s faith and love be strong enough to forgive each other, and deal with all the consequences of their behaviour?

All Made Up by Kara Isaac

Kara Isaac (New Zealand) has released All Made Up, a standalone contemporary romance that features some characters from her previous novels.

Everyone thinks Katriona McLeod is living the dream. Her professional career as a make up artist sees her traveling the world working with the stars and she's got no shortage of men wanting her affection. Only problem is she's never gotten over Caleb Murphy, the one guy she's ever loved. When she accepts a job on the latest looking-for-love reality TV show, Falling for the Farmer, she discovers to her horror that Caleb is the leading man and she's cast as one of his harem. But she hides a secret that means that even if she wanted a second chance with the guy who broke her heart she could never have it.

Caleb Murphy couldn't care less about C-Class celebrity fame or reality TV and he certainly doesn't believe it could lead him to love. The one thing he does care about is fulfilling his mother's last wish. Kat's presence on the show seems to offer up a solution that will make both the network and his mother happy. It might have been almost ten years since they split but he knows he can trust her with his plan. Just as long as he doesn't fall in love all over again with the woman who will never stay.

The Making of Mrs Hale by Carolyn Miller will release in November 2018.

Rita Stella Galieh is working on a proposal for a new series.

Jessica Kate is working on the edits for Love and Other Mistakes, which will release from Thomas Nelson in 2019. Click here to read the first chapter on her website.

Kara Isaac is working on the edits for One Thing I Know, which will release from Howard Books in February 2019.

Janet Sketchley is working to release Hidden Secrets (next in the Green Dory Inn Mystery series) in early 2019.

Tara Ross has completed her first YA novel, and signed with Cyle Young and Hope Bolinger at Hartline Literary Agency. She is currently querying and hoping her manuscript finds a home.

A hothead businessman coming to the city for a showdown meeting to save his job.

A mother of three hoping to survive the days at her sister's house before her niece’s wedding.

And a young artist pursuing his father’s dream so he can keep his own alive.

When David, Gillian, and Michael each take the wrong suitcases from baggage claim, the airline directs them to retrieve their bags at a mysterious facility in a deserted part of the city. There they meet the enigmatic Baggage Handler, who shows them there is more in their baggage than what they have packed, and carrying it with them is slowing them down in ways they can’t imagine. And they must deal with it before they can leave.

In this modern-day parable about the burdens that weigh us down, David Rawlings issues an inspiring invitation to lighten the load.