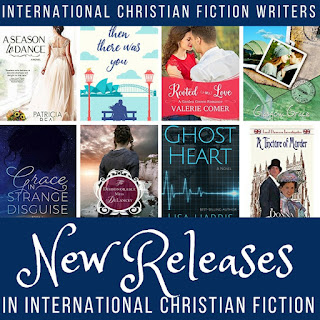 A Secret to Die for by Lisa Harris


Psychologist Grace Callahan has no idea that she has a secret--one worth killing for. But when she finds out one of her clients has been murdered, she quickly realizes that the computer security specialist wasn't simply suffering from paranoia.

Detective Nate Quinn has just been cleared for active duty after a bombing killed eighteen people, including his partner, and left him dealing with PTSD. His first case back on the job involves the murder of Stephen Shaw, and his only lead turns out to be an old friend, Grace Callahan--and her life is in grave danger. Someone believes Shaw gave his psychologist information before he died. Information they are willing to kill for.

With her signature pulse-pounding suspense, Lisa Harris takes readers deep into the heart of fear in this race against the clock.

Flavors of Forever by Valerie Comer


God’s love is the gold mending broken hearts and dreams

As her friends pair off, Kassidy North thinks happily-ever-after has passed her by, but she’s too busy running a busy bistro and once-a-month cooking club to be bothered by it. Much. Until a single dad moves into the neighborhood and threatens to invade her dreams and well-ordered life.

Metal sculptor Wesley Ferguson is a cynic when it comes to romance, but something in Kass makes him want to believe again. He’s not so sure he agrees when she insists forever love begins with God. What has God ever done for him?

Unable to avoid one another in the close-knit community of Bridgeview, Kass and Wesley develop the beginnings of a friendship. But when relationships break around them, can they see God as the glue capable of holding broken pieces together… forever?

All Made Up by Kara Isaac


Everyone thinks Katriona McLeod is living the dream. Her professional career as a make up artist sees her traveling the world working with the stars and she's got no shortage of men wanting her affection. Only problem is she's never gotten over Caleb Murphy, the one guy she's ever loved. When she accepts a job on the latest looking-for-love reality TV show, Falling for the Farmer, she discovers to her horror that Caleb is the leading man and she's cast as one of his harem. But she hides a secret that means that even if she wanted a second chance with the guy who broke her heart she could never have it.

Caleb Murphy couldn't care less about C-Class celebrity fame or reality TV and he certainly doesn't believe it could lead him to love. The one thing he does care about is fulfilling his mother's last wish. Kat's presence on the show seems to offer up a solution that will make both the network and his mother happy. It might have been almost ten years since they split but he knows he can trust her with his plan. Just as long as he doesn't fall in love all over again with the woman who will never stay.

Hidden Among the Stars by Melanie Dobson


The year is 1938, and as Hitler’s troops sweep into Vienna, Austrian Max Dornbach promises to help his Jewish friends hide their most valuable possessions from the Nazis, smuggling them to his family’s summer estate near the picturesque village of Hallstatt. He enlists the help of Annika Knopf, his childhood friend and the caretaker’s daughter, who is eager to help the man she’s loved her entire life. But when Max also brings Luzia Weiss, a young Jewish woman, to hide at the castle, it complicates Annika’s feelings and puts their entire plan—even their very lives—in jeopardy. Especially when the Nazis come to scour the estate and find both Luzia and the treasure gone.

Eighty years later, Callie Randall is mostly content with her quiet life, running a bookstore with her sister and reaching out into the world through her blog. Then she finds a cryptic list in an old edition of Bambi that connects her to Annika’s story . . . and maybe to the long-buried story of a dear friend. As she digs into the past, Callie must risk venturing outside the safe world she’s built for a chance at answers, adventure, and maybe even new love.


Some people marry for love; others marry for music...

Rose McNeil is rising the ranks at the Mozarteum in Salzburg as a violinist to watch. Her musical Nova Scotian heritage has loaned an unparalleled technique to her interpretation of some of the most beautiful compositions in the world. The opportunity of a first chair assignment to the Rainer Quartet under the tutelage and baton of Oliver Thorne is a dream come true--- until her student visa expires and the threat of leaving Vienna looms. As much as she grieves the prospect of leaving Vienna and the quartet, it is Oliver—with his dry sense of humour and unexpected charm- she will miss most.

British ex-pat Oliver Thorne’s recent appointment as conductor to the Rainer Quartet make him the youngest in the role during its prestigious history. But it wasn’t the path he wanted. A tragic car accident years ago forbade him from ever playing his beloved cello again. Now he spends his life teaching and guest conducting for premiere orchestras at the Musikverein. When he first hears Rose McNeil play, all the dreams he left by the wayside are reborn with her unexpected talent. When Rose learns she may have to leave Vienna, Oliver has to come up with a solution. Losing his first violinist is unfortunate, losing her is unimaginable.

So he comes up with a crazy idea: A marriage on paper only. She’ll take his name and his citizenship. They’ll split rent money and coin toss to decide who takes the bed or the the futon every night. They’ll keep their secret from the orchestra. She’ll play and he’ll conduct and, most importantly...she’ll stay.

Unbeknownst to each other, Rose is in love with Oliver and Oliver is in love with Rose. They might even find a happy ending, if only their pesky marriage doesn’t get in the way.

Flame in the Night by Heather Munn


In occupied France, a teen is torn between hate and love.

Julien Losier has just turned eighteen. But this is Vichy France in 1942, and his coming of age is marred by the Nazi occupation of his homeland. His father has always taught him that evil is resisted by the power of God, not by the gun. But when the roundups of Jews begin and both his best friend and the girl he's falling for become targets, Julien must question where real power lies. Can he be a man who protects the people he loves if he follows his father's ways of peace?

His hometown is a fragile fortress where hundreds of Jewish youth hide in plain sight, protected only by the goodwill of their neighbors. Julien takes part in the intricate system of sentries and alert codes that keep them safe, doing what he can to resist the Nazis. As the Germans close in, he can see the moment coming when all the town's careful defenses will fail. He's torn between the faith of his father and his increasing surety that fighting violence with violence is the only way to win. How can the meek inherit the earth when the strong hold all the cards?

Now the young Jewish woman who has captured his heart comes under deadly threat, and there are no good choices. But for Elise, there's nothing Julien won't risk.

Based on actual events in Vichy France, Flame in the Night is a powerful examination of the strength of faith and peaceful resistance in the face of overwhelming odds.


Once London's top thief, Barclay Pearce has turned his back on his life of crime and now uses his skills for a nation at war. But not until he rescues a clockmaker's daughter from a mugging does he begin to wonder what his future might hold.

Evelina Manning has constantly fought for independence, but she certainly never meant for it to inspire her fiancé to end the engagement and enlist in the army. When the intriguing man who saved her returns to the Manning residence to study clockwork repair with her father, she can't help being interested. But she soon learns that nothing with Barclay Pearce is as simple as it seems.

As 1915 England plunges ever deeper into war, the work of an ingenious clockmaker may give England an unbeatable military edge--and Germany realizes it as well. Evelina's father soon finds his whole family in danger--and it may just take a reformed thief to steal the time they need to escape.


Praetorian Prefect Sextus Burrus has spent his life fighting for the glory of Rome, but that glory has lost its shine. As both his health and his career crumble, he is drawn toward the seemingly inexhaustible peace of one of his Jewish prisoners, the Apostle Paul.

The moment Timothy hears his mentor and surrogate father Paul has been arrested, he rushes to Rome. Under the looming threat of execution, Timothy struggles to make sense of what is happening. Finally, an unexpected crisis requires him to reexamine everything, and places their hope for Paul’s freedom on the shoulders of Praetorian Prefect Sextus Burrus.

Guardian of Ajalon by Joan Campbell

The poison tree path is Shara’s road home. . .if she and her companions can survive the journey. In the danger and darkness of the forest, the only respite she finds is in the story unlocked in the Old Tongue book. In this vivid world, Shara finally discovers what she has longed for all her life: the key to the secrets of her past. Yet time is running out for Shara—and all of Tirragyl—as Lord Lucian, King Alexor, and the royal army attack the Guardian Grotto to claim the powerful Guardian Rock.

Unwilling to sit idly by as her kingdom is destroyed, Queen Nyla leaves her hiding place to recruit a most unlikely army—the Charab. But how can she win over the infamous assassins who have been oppressed by her family for generations?