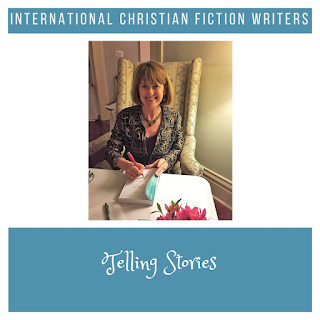 When I was a child, parents would warn their kids not to tell stories. By that, of course, they were speaking about lying.

Thou shalt not lie.


I was a good little girl, the one who wanted to please, to do things right, so I tried my best not to lie. But oh, how I told stories! Story after story as they galloped through my mind, like the horses doing the same thing in the riding ring behind my house.


I told them to anyone who would listen to, or, more often, read them. I still have the spiral notebooks of my scribbled stories of yesteryear.

When I was blessed with two little boys, I went back to telling stories,


nightly stories about Blackie and Angelfoot, the adored ponies, and Slimy Green and Shiny Green, the friendly snakes, and Mr. Snodgrass, the befuddled but kind neighbor. Story after story. And always, somehow, a spiritual anecdote crept into these stories, a little something to turn my sons’ imaginations toward Jesus. During their naptimes, I’d write down the morning’s disaster, turning it also into some sort of anecdotal and redemptive story.

Our ritual of story-telling continued,


along with reading them books, up into their double-digit days. Yes, they were reading on their own, but amazingly (and delightedly for this little momma) they still loved snuggling with me in bed for a book and a story.

The habit of telling my sons stories and writing them down, along with whatever spiritual tidbit I could grab onto


until one day, my sons both trotted off to school, and I had the morning to create and craft fiction with the Gospel subtly embedded in the story.

We writers are meant to tell stories, and what better audience to start with than our own kids?


I am now a grandmother of three, and I once again have the delight of reading books and telling bedtime stories to these precious little people. 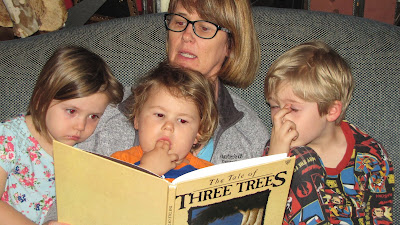 Yesterday was Mother’s Day and for this one year, we’re in the States, living right down the street (figuratively, but close literally) from the grandkids. They came with our son and daughter-in-law for a cookout. And late in the evening, well past their bedtime, I snuggled with the three in bed and began my story…

When their daddy poked his head in to say, “Time to go home,” they looked up in dismay until I explained we were in the middle of a story. Then he quickly backed out of the room with, “Okay, just come downstairs when the story’s over.”

I treasure these times for many reasons, but one of the less obvious ones is simply that

making up bedtime stories is keeping my imagination going. And oh, how we writers need that!


For all of my twenty-five years as a published author, I’ve had another job, too, of missionary, as well as the cherished roles of wife, mother, manager of the manse, etc. So often my other jobs have crowded in to steal away my writing time. Sometimes months go by without me working on a novel, as is the case with these ten months back in the States.

Caring for our aging parents, being involved in family celebrations that we usually miss out on, visiting supporters and supporting churches, speaking about my novels to all different groups of readers, working with our missionaries in our pastoral role and many other things have all but pushed aside my mornings to write.

With my grandkids, I am once again

using my imagination to exercise my creative muscles


so that they don’t atrophy, so that they’re in good condition when the space opens up for me to sit down and tell another story. 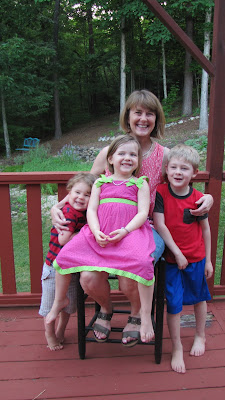 That’s what being a novelist is all about, isn’t it? I promise I'm telling the truth.


How do you keep exercising your writing muscles when life gets in the way of your actual writing?

ELIZABETH MUSSER usually writes ‘entertainment with a soul’ from her writing chalet—tool shed—outside Lyon, France. For over twenty-five years, Elizabeth and her husband, Paul, have been involved in missions’ work in Europe. To be closer to family, the Mussers have moved back to the Southeast for 2017-2018 school year and are living in the Chattanooga area near their son, daughter-in-law and three grandkids. Find more about Elizabeth’s novels at www.elizabethmusser.com and on Facebook, Twitter, and her blog.