Bookish Tuesday | A Light on the Hill by Connilyn Cossette 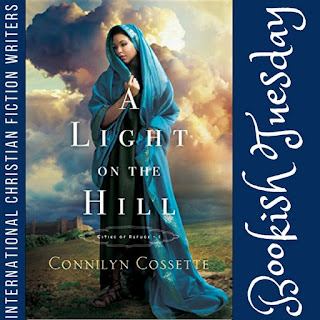 A Light on the Hill is the first book in Connilyn Cossette’s new Cities of Refuge series. I think some of the characters featured in her previous Out from Egypt series, Counted with the Stars, Shadow of the Storm, and Wings of the Wind. I haven’t read any of the Out of Egypt series, but didn’t feel I missed anything.

The series title gives a hint as to the plot of A Light on the Hill: someone needs to seek refuge. Here’s the book description:

Seven years ago, Moriyah was taken captive in Jericho and branded with the mark of the Canaanite gods. Now the Israelites are experiencing peace in their new land, but Moriyah has yet to find her own peace. Because of the shameful mark on her face, she hides behind her veil at all times and the disdain of the townspeople keeps her from socializing. And marriage prospects were out of the question . . . until now.

Her father has found someone to marry her, and she hopes to use her love of cooking to impress the man and his motherless sons. But when things go horribly wrong, Moriyah is forced to flee. Seeking safety at one of the newly-established Levitical cities of refuge, she is wildly unprepared for the dangers she will face, and the enemies--and unexpected allies--she will encounter on her way.

It can’t be, because the setting predates Christ. But it is an insight into the life and culture of the times of the Old Testament—in this case, the years after the nation of Israel first arrived in the Promised Land under the leadership of Joshua. And it does point to Jesus. The cities of refuge represented a revolutionary idea. An accused criminal could seek and gain mercy, instead of being subject to the cultural retribution of an eye for an eye, a life for a life.

But the theme of A Light on the Hill is definitely Christian.

Justice, or mercy? Love, or hate? Forgiveness, or retribution? While Biblical fiction isn't Christian fiction per se, good Biblical fiction reinforces the fact the Bible is one story, with the Old Testament foreshadowing the New Testament. This is additionally reinforced by the main characters, most of whom have chosen to follow Yahweh rather than being born Hebrew.

I don’t read a lot of Biblical fiction. It seemed to fall out of favour for a while, and my interest got pulled in other genre directions. But A Light on the Hill easily equals those early Biblical fiction stories I read from authors like Francine Rivers and Angela Hunt.

The story does take a while to get going—the first quarter is background, introducing the characters and setting up the situation that will force Moriyah to flee for her life. However, even this background is an interesting and necessary introduction to life in Shiloh in the early days of Israel.

The writing is strong. It’s an unusual choice to write historical fiction in first person, but it works because it takes us deep into Moriyah’s mind, and that enables us to relate to her. After all, we all have hidden scars of one sort or another. The characters are well-drawn, and the plot is full of suspense as we journey with Moriyah, hoping she’ll reach her objective, yet worried she won’t.

A Light on the Hill a story of judgement as the people of Shiloh judge Moriyah based on her external appearance to the point she hides away from people and from life. It’s also the story of mercy, as Yahweh has already established the means for Morihay to be accepted and saved.

Recommended for fans of Biblical fiction, or for those who would like to better understand the times of the Bible.

Thanks to Bethany House and NetGalley for providing a free ebook for review.