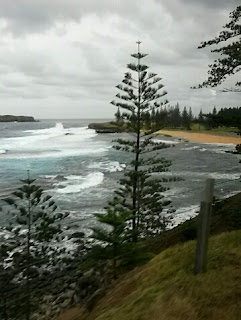 Can you imagine the state of the last Englishman left on an island - Pitcairn - after a brutal killing spree where all his mates murdered each other? Also being surrounded by a host of their wailing wives and children. John Adams had to cope with this horrific aftermath. But he had a plan.....

To most Australians and Kiwis, the Pacific island of Norfolk conjures up times of, a remote penal settlement, cruelty to convicts, huge pines, Captain Bligh, Fletcher Christian, mutiny on the Bounty, Tahitian girls, and resettlement in the time of Queen Victoria.

Hollywood made three films of the saga.The last being actor Mel Gibson cast as Fletcher Christian. The Bounty under the fine seamanship of Bligh a 34 yr old ambitious fellow who had a vicious temper and a habit of belittling those under his captaincy. Fletcher Christian, once his protege, soon became a target for his outbursts. Probably through jealousy as his humble beginnings contrasted with Christian's aristocratic forbears. The situation was a kettle reaching boiling point.

They finally landed on Tahiti. Their mission being to pick up enough breadfruit seedlings as cheap food for slaves. Once completed, after a prolonged stay, the sailors were ordered by their enraged captain to leave their Tahitian wives and children behind,  resulting in a mutiny. Christian and Quintal  managed to avoid bloodshed by sending off Bligh with several sailors to make the arduous trip home in a small boat. Bligh, a brilliant navigator, used the stars to guide them back to England.

Those remaining returned to Tahiti to their wives and children, but knowing they'd be hunted down and hanged by the British, they sought out another island and came across Pitcairn - marked incorrectly on maps of the time. Here they spent many years but once jealousies flared and rum came on the scene, the above situation came to pass, with John Adams as sole survivor of the men. 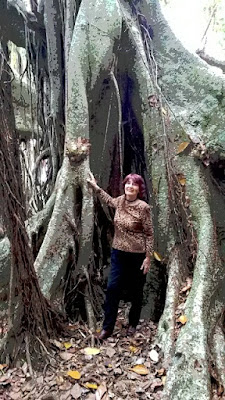 Hope for the Future

Determined this would never happen again, Adams sought help from the only two books they'd saved from the ship when it burned - the Bible and the Church of England Prayer Book. How amazing he was not left without hope. So for many years he became their pastor, teaching English, Christianity, and the precepts from the Bible. From then to present day, these women are known as their descendants' foremothers.

When an American Whaler called by, Adams asked them to send a message requesting Queen Victoria for a pardon which she eventually granted. As the descendants flourished, they became too large a people group to remain on the small island. In 1856 the queen graciously gave 194 persons permission to colonize Norfolk, previously used by the British as a penal settlement. Even today, the ruins of soldiers barracks and prison remain at Kingston, besides many well maintained colonial dwellings and old government house.

(Sheltering beneath one of the trunks of a banyan covering a half acre of land.)

Indie Publisher, Rita Galieh, has written a trilogy of historical novels & also contributed to several US anthologies. She is now completing a third historical romance series. Besides her weekly blog, she can be found @RitaSGalieh Facebook and www.ritastellapress.com
Rita studied art at the National Art School then joined the family ceramics studio. After their marriage, she and her husband attended Emmaus Bible College, and were also involved with Christian Television on Sydney’s Channel Nine. Currently she co-presents Vantage Point, an Australia-wide Christian FM radio program. She enjoys giving her fun-filled presentations of ‘Etiquette of the Victorian Era’ in costume.
Posted by Rita Galieh