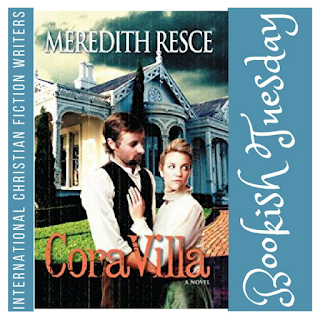 Today we have author Meredith Resce joining us to talk about her book Cora Villa. I read this book and wanted to visit the house and area and thought it would be great for a Wandering Wednesday post and do a Bookish Tuesday post finding out how the book came about.

Welcome Meredith to ICFW today and thanks for talking about Cora Villa.

Can you tell us a little about yourself and what books you like to write and if you have a preference?

Hi Jenny. Thank you so much for inviting me to this interview. I have been published as an author since 1997, starting out mainly writing period drama romance—that is drama set in an historical context using romance as one of the main elements, but not just romance, but other issues to be faced as well. Most of my work is set in colonial or early 20th Century Australia. However, over my time of writing, I have tried several other genres, including contemporary drama/romance, fantasy/allegory, murder mystery and a crime drama under a pseudonym, EB James. At present, I am working on two non-fiction books.

Apart from writing, I have for the most part of my adult working life been in domestic management with the department of home affairs (euphemism for stay at home mother). I have taught music as a side line in and around the children. Once the three children left home and became totally independent, I went to university, studied a double degree in Arts and Education, and now work part time as a teacher. Currently, I am teaching media and music, though I have done drama, English, history and geography.
I currently live in Melbourne, but all of my family, children, parents, siblings etc live in South Australia, so I gravitate there in my heart and in my writing as well.

What was the inspiration for Cora Villa?

From 1989 til 1994 we lived as a family in Geelong, Victoria. My husband is a minister, and so we have lived around in various places. While there, I used to take the scenic route to church on a regular basis. This not only got me out of the main traffic, but also took me along the bay waterfront in Geelong, which is picturesque and inspiring. I always drove past this magnificent stately home on the cliff front overlooking the bay. It had huge leafy oak trees in the yard, manicured gardens and I just loved looking at it as we went by. At that time, I had only just started writing, and was not yet published, but I was churning out novel ideas at a fair rate. One day when driving past, I said to my passengers in the car, I’m going to write a novel about that place. What do you think the story is behind it? We began to throw ideas around, and one point came up, that it would be about a mysterious visitor with no known past. I pondered on this idea, and my imagination ran away with it, as it usually does. One day I drove by the house and decided to stop and take a closer look. The entrance gate was on the side of the house, a solid, white, wrought-iron gate that had a gold plaque on it. I thought it said Cora Villa. Perfect. That would be the name of my main character – and so Cora Stewart was born. It wasn’t until I looked closer and did some research, the plaque actually says ‘Corio Villa’. The house is perched above Corio Bay, so that makes sense. But never let the facts get in the way of a good story. By the way, the story has nothing to do with actual historical fact. Only that it is set in Geelong, and that there are a load of merchant warehouses along the water front, to service the busy trade port of the past. 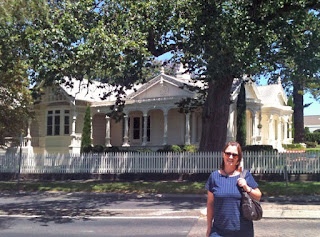 Can you tell us a little about the book and the heroine and hero?

Set in late 1880’s. Cora Stewart has recently lost her mother to drowning in a ferry accident. Cora is a strong-minded young woman who has already challenged her father’s authority by developing a relationship with one of his office managers. When her mother dies, Garrison Stewart sinks deep in depression, and Cora is afraid she will lose her father as well. She breaks off the relationship because her father has always had his heart set on his daughter marrying to fulfil an old betrothal arrangement formed when she was a young girl. Before they left England to emigrate to Australia, Garrison arranged with his best friend that their two children would marry and that his English estate would then go to the Bennett family, along with his daughter.

Cora has known about this betrothal, and has resisted it all her life.

Then Cora finds a stranger, injured and collapsed on the beach. She has him brought back to the house to be nursed. While at first she thinks the stranger dirty and ill-mannered, there is something alluring about him, and she finds herself fascinated by him.
Garrison doesn’t see the danger in offering kindness, and once he realises that something has formed over a period of time between them, he throws him out of his home.
I won’t tell you any more, because there are a lot of bits and pieces that help to build a mystery surrounding our stranger. Who is he, and can he be trusted?

Did you find any fun titbits while researching the story and area you would like to share?

I researched some on the orphanage in this area. Cora takes a notion to be useful, and goes to help with the orphans.
I also researched the real history of Corio Villa. The house was apparently made in the UK (Scotland I think) and shipped out to Australia, but was never claimed on the dock as the person who had ordered the prefabricated house died. It was sold to another owner, and it is probable the house was constructed without plans. It is known to be the first prefabricated cast-iron house to be built in Australia. Look up the history of Corio Villa. It is interesting, but you will notice that my story has nothing to do with it. I was merely inspired by the house.

Is there a message you would like readers to take home from this book?

I wrote this book originally way back in 1993, and have re-written it twice since then. It could possibly do with another re-write, given all the changes in writing styles, however, I think the original message I hoped to have come through was the delicate balance between respecting authority in your life and being able to carefully consider what is right for you before God, even when someone over you has a strong view. Cora moved between defying her father to fearing her father. I hoped that finally they could talk together and understand each other. Hopefully that their final outcome would be the heart of God the Father, not the strong will of either one of them.

Have you ever been able to visit Corio house?

I have only ever visited the outside, and walked along the beach front many times, just for inspiration. It is a beautiful day out. Of course the water front would have looked very different one hundred and thirty years ago.

I hope you get to read this book (it is only $3.99 on kindle) https://www.amazon.com/Cora-Villa-Meredith-Resce-ebook/dp/B00COW2E6K/ref=sr_1_1?ie=UTF8&qid=1521768995&sr=8-1&keywords=cora+Villa+meredith+Resce
I am aware that some of the writing is not according to the most recent editing standards, but I have not had time to go back and rewrite. If you’re a stickler for POV, speech attributions, excess adverbs etc, you might find some things to complain about. But if you can switch your internal editor off, you will enjoy the story—the characters, the drama, the mystery and the romance.
Also, if you’d like to see a visual representation of it, click the following You Tube link. I produced a short trailer for this book a number of years ago, using the same characters who you see featured on the cover.

We will be giving away one Ecopy of this book. To enter you just need to comment today or tomorrow with a way to contact you. You will get one entry for each comment. Check back on April 18 to see if you have won. 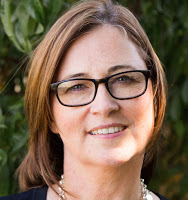 South Australian Author, MEREDITH RESCE, has been writing since 1991, and has had books in the Australian market since 1997.
Following the Australian success of her “Heart of Green Valley” series, they were released in the UK and USA.
She recently released her 17th project, ‘Echoes in the Valley’.
Apart from writing, Meredith also takes the opportunity to speak to groups on issues relevant to relationships and emotional and spiritual growth.
Meredith has also been co-writer and co-producer in the 2007 feature film production, “Twin Rivers”.
With her husband, Nick, Meredith has worked in Christian ministry since 1983.
Meredith and Nick have three adult children, one daughter and two sons.