Who Packs Your Parachute? by Shirley Corder 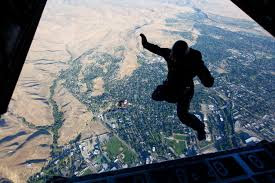 "In a word, what I'm saying is, Grow up. You're kingdom subjects. Now live like it. Live out your God-created identity. Live generously and graciously toward others, the way God lives toward you" (Matthew 5:48 MSG).

A story appearing on Social Media and other cyber sites tells of Air Commodore Vishal, a jet pilot. In a combat mission, his fighter plane was destroyed by a missile. He managed to eject himself and parachuted to safety. He won acclaims and appreciations from many.

About five years later, he was sitting with his wife in a restaurant. A man from another table came over to him and said "You're Captain Vishal ! You flew jet fighters. You were shot down!"

"How in the world did you know that?" asked Vishal.

"I packed your parachute." The man smiled as he replied.

Vishal gasped in surprise and gratitude and thought, If that parachute hadn't worked, I wouldn’t be here today.

Vishal couldn't sleep that night, thinking about that man. He wondered how many times he might have seen him and not even said 'Good morning, how are you?' or anything because, he was a fighter pilot and that person was just a safety worker.

I don't know about you, but for me 2016 has been a tough year, both physically and emotionally. I'm looking forward to a clean slate in this new year.

When I ask myself this question, many people come to mind, such as:

* the folk who supported me and prayed for me, perhaps unknown to me

* those who bought the two e-books I published during the year, and

* those who encouraged me in so many different ways

I could go on.

Let me start the new year by thanking each and every one of you who have packed parachutes during the past year. The Lord bless you for your perseverance and commitment.

Who will pack our parachutes in 2017?


Who will pack your parachute this year?

And not just one parachute--there will be man, many of which are unknown to you at this time. You may need a parachute to help you get over a physical need. Perhaps you will need an emotional or a mental parachute. Or a spiritual one.

At this time when thousands make New Year Resolutions, let us each one resolve to notice, acknowledge, and pray for the people in the background, those who pack the parachutes that enable us to survive the many crises we are likely to face during 2017.

Please take the time now to jot down in the comment section one situation where someone packed a parachute for you during 2016.

SHIRLEY CORDER lives on the coast of South Africa with her husband, Rob. She has recently embarked on a series of eBooks titled, Out of the Shadow. Book 1 is Naomi, Beloved Mother-in-Law and Book 2 is Eve, Mother of All.