I Can't Believe I Missed That!


We spent most of June in bonnie Scotland visiting my brother who’d immigrated there a year ago. A blog or two back I’d promised to share more of that trip. Today, I’ll focus on our time in the city of Edinburgh.

I love Scotland. Who doesn’t? I know I’m biased, though. My grandfather was born and bred (till the age of fourteen) in the Highlands near Inverness, so there’s just this overwhelming feeling of returning to my roots when I visit this place.

We saved a day trip to the city for our last day in Scotland. With seven in our party, too many for one car, we took the train into the city. Edinburgh in one car would be a nightmare. In two... Don’t want to even think of that. It was great to sit back on the train, relax, and watch the green Scottish landscape go by. 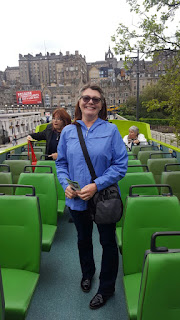 We booked an all-day Hop-On-Hop-Off City Bus Tour. I’ve always wanted to do one of those, and it was great fun. We did our loop twice. The first time sitting upstairs in the open section so we could see where we wanted to stop and explore. The second time downstairs so we could hop on and off the bus several times. Having humorous tour guides explaining what we were seeing was not only informative, it was entertaining, too. Here my sister-in-law is patiently waiting for my brother while I’m scurrying into a seat behind her. My sister’s already found her place at the back of the bus.

First place we saw, just outside Edinburgh’s main train station and right where the tour buses leave from, was Scott Monument. This interesting Victorian Gothic monument to Scottish author Sir Walter Scott is reputedly the largest monument to a writer in the world. Even though reaching the highest platform promised a certificate to commemorate the climber’s achievement, I’d conquered my full quota of stairs that holiday, and my legs protested adding another 287 to my count. 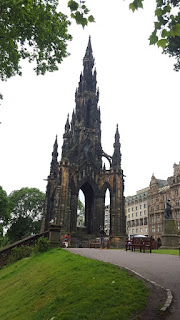 I absolutely loved this cute two-story building—Queen Mary’s Bath House.  Way back in the 1500’s it was attached to a boundary wall which enclosed the King’s privy garden of Holyrood Palace. The royal family would relax here when out strolling in the garden.  It’s unknown whether it ever actually contained a bath. 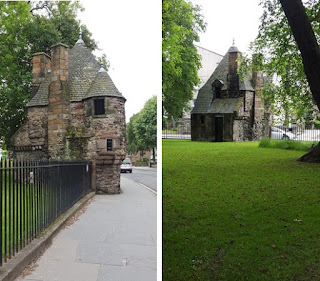 We looked on at Holyrood Palace, the official Scottish residence of the British monarch, from outside the gates—too much to see, too little time. Situated at the bottom of the Royal Mile, Holyrood has served as the principal residence of the Kings and Queens of Scots since the 16th century. 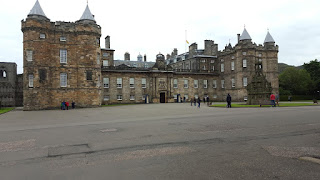 The Royal Mile is filled with interesting building such as these. I wish we’d had the time, and the strength to walk this entire road. Definitely on my itinerary for the next trip. 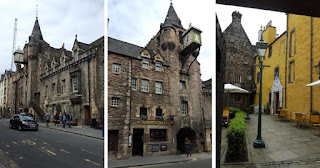 The Scottish Parliament building, not far from Holyrood was unusual—from the distinctive windows inspired by Henry Raeburn’s iconic painting, The Skating Minister, to the Canongate Wall façade that has quotations inscribed onto pieces of rock. These quotations are from Scottish writers and poets like Sir Walter Scott, Robert (Robbie) Burns, Sir Alexander Gray, Edwin Moigan, Norman MacCaig, and Hugh MacDiarmid. Some quotations are from historical politicians, activists, and artists. I was both surprised and pleased to find a quotation from the Bible (right hand image). This building has won numerous awards and described by landscape architect Charles Jencks as “a tour de force of arts and crafts and quality without parallel in the last 100 years of British architecture”. 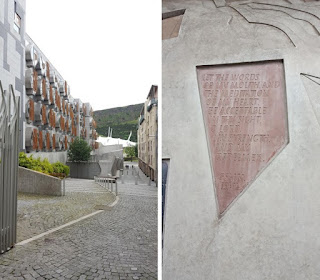 How glad I was when we found the small statue of Greyfriars Bobby in a corner of Candlemakers Row. This Skye Terrier rose to fame in 19th-century Edinburgh. Bobby spent 14 years guarding his owner’s grave until he died. In 1912 Eleanor Atkinson wrote a novel based on the true story. Bobby’s story was also made into a movie in 1961. There are several books and films about Bobby’s life. I read one of them many years ago and enjoyed it. Here my sister is trying to touch Bobby’s nose. You’ll notice how shiny his little snout is—the result of rumors that it’s good luck to rub his nose. Apparently tourists are asked to touch gently after work to restore this tiny part of the statue failed for a second time. I didn’t see any signs alluding to this request though. 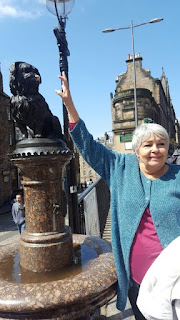 Unfortunately, there wasn’t enough time to go to Edinburgh Castle, but we did see this imposing fortress from the top of the bus. 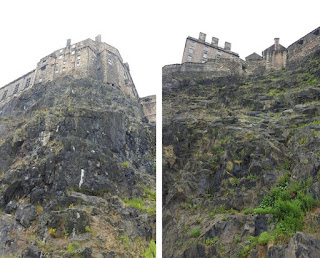 No trip to Scotland would be complete without indulging in a haggis. Thanks to my brother’s previous trips to Edinburgh, we were treated to the best haggis around (at least I thought so). The photo speaks for itself. 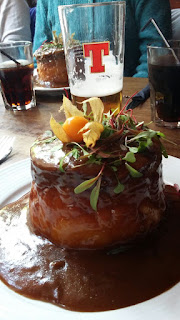 After our trip to Scotland, I happened to be on the internet doing some research for a story, when I stumbled upon The Writer’s Museum. HOW DID I MISS THAT! Definitely another good reason to visit Scotland, and the fascinating city of Edinburgh, again.