Bitter? Or Better?~ by Shirley Corder 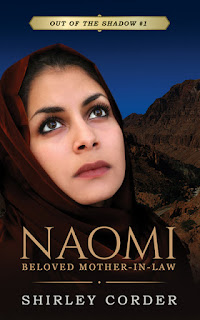 For those of you who don't know this lady well, you'll find her story in the book of Ruth in the Old Testament.

Naomi's husband, Elimelech, took her and their two sickly sons, away from Bethlehem to the country of Moab. While living there, first Naomi's husband died, then both her sons.

Naomi eventually returned to Bethlehem accompanied by Ruth, her daughter-in-law, the one after whom the Bible book is named.

I found it intriguing that the book was called Ruth. After all, the opening verse, Ruth 1:1, mentions Naomi. Ruth only enters the picture years later. And the story ends with Naomi as she receives her newborn grandson. In between we have the tender love story of two unlikely characters.

We have Ruth, the Moabitess, a widow whose only means of an income involved walking behind the reapers in the fields, picking up the stalks they dropped on the ground. And we have Boaz, a rich landowner considerably older than Ruth, who was highly esteemed in the little town of Bethlehem. The couple fall in love and . . . but you must read it for yourself! It's a lovely story.

We soon see Naomi to be a courageous woman who faces some difficult decisions. Our first impressions are of a spunky lady who copes well with all the tragedy that is seemingly thrown at her. Yet in the words above we catch a glimmer of how depression stalks her life. She becomes bitter in her heart. Bitter against God. Despite her emotional low, Naomi never allows it to turn her from her God, and gradually she begins to see His hand at work in her life.

As I pondered the life of this Israeli woman and all she went through, I found myself drawn into her story. Despite all she went through,and her brief spell of depression, Naomi clung to God, even when she didn't feel His love. She rose beyond her hardships to play an important role in the ancestry of King David, and ultimately of Jesus Christ.

Are you facing a difficult period in your life right now? Are things threatening to get you down? Have you recently lost someone special from your life? I urge you to tell God how you feel. Don't try to live behind a mask. Be honest with Him, and trust Him to bring you through. You can allow your hard times to make you bitter, or you can rise above the bitterness and become better.

Make sure that no one misses out on God’s wonderful kindness. Don’t let anyone become bitter and cause trouble for the rest of you Hebrews 12:15 CEV.

SHIRLEY CORDER lives on the coast of South Africa with her husband, Rob. She has recently embarked on a series of eBooks titled, Out of the Shadow. Book 1 is Naomi, Beloved Mother-in-Law.