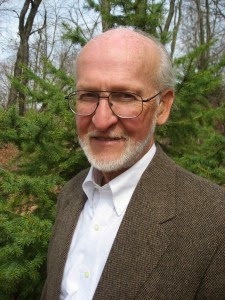 I’m only on book four in Mel Starr’s fabulous medieval mystery series, and book seven is already out in the UK! I’d better get busy.

I picked up The Unquiet Bones, Book 1 in the Chronicles of Hugh de Singleton, Surgeon, hoping for a good mystery ala Brother Cadfael and wasn't disappointed. Starr obviously has a thorough knowledge of the period and conveys his story in a compelling and convincing voice shot through with wisdom and dry humor. (“Pigs are much like men. Or perhaps men are like pigs: we think little of what today’s pleasure may cost tomorrow.” [A Trail of Ink, p 32-33])

Recently I asked him to tell us a little about his main character.

MS: Master Hugh de Singleton is a surgeon at a time (late 14th century) when surgery was just beginning to separate from barbering. Surgeons were considered "mechanics" at that time; they fixed what was broken, but were not thought able to cure disease. Of course, physicians could not cure disease, either. Hugh is from the manor of Little Singleton, in Lancashire. I chose that place because many generations ago my ancestor, Hucca de Singleton, was lord of the manor there. Nothing medieval remains.

LH: That is so cool! Hugh follows Henry de Mondeville in his surgery (allowing for more modern medical practice than typical of the era) and Master John Wycliffe at Oxford (giving him a proto-Protestant theology.) I love that Wycliffe, Oxford don and early translator of the Bible into English, is Hugh’s mentor and confidant. In A Trail of Ink the don's precious handwritten books are stolen, and Hugh must unravel the puzzle while taking advantage of his time in Oxford to woo the beautiful Kathryn Caxton, daughter of an Oxford bookseller. Are there other real historical persons who play major roles?

MS: Lord Gilbert Talbot and his wife, Petronilla, were real people. The sheriffs of Oxford which I name were also real characters.

LH: Hugh’s home of Brampton is in the beautiful Cotswold hills west of Oxford. Have you visited there? What drew you to that part of the country?

MS: I chose Bampton as the setting for my series because of friends, Tony and Lis Page, who live there. My wife and I visited them in 2001, shortly after they moved there, and I recognized that it would be an ideal setting for the mysteries I wanted to write. Bampton Castle was quite large, but all that remains is a farm house called Ham Court which was once the gate house and a part of the curtain wall.

LH: Again the personal connection. I love it! You didn’t start writing seriously until you were retired. What made you want to tackle a second career and why this one?

MS: I believe that all who enjoy reading have at one time thought that they would like to try their hand at writing. And I enjoy history, having taught it for 39 years, so why not?

LH: You taught US and world history. You have an MA in modern history. What made you choose medieval England for the setting of your Hugh de Singleton mysteries?

MS: High school history teachers have to be generalists. So, although my MA is in recent US and European history, I taught medieval history for many years and discovered a fascination for the period. I believe that we overlook the talents and skills of the medieval Europeans. An engineer friend of mine told me that he didn't think any engineers today could build the spire of Salisbury Cathedral using only the tools available to medieval men.

LH: My art-historian daughter worked on the renovation of that spire during the summer of 1998. I'm very grateful that they used modern scaffolding to put her fourteen stories up and only the mortar was authentic. :-)

To my mind, mysteries are so difficult to plot. How do you go about it? Do you know when you begin whodunit?

MS: Some writers like to have their plot completely outlined before they begin a novel. I am not one of those. I'm as interested to learn how things will turn out as the reader is. I like to base my stories upon some real medieval event; for example, the plot of Rest Not In Peace turns upon the Statute of Laborers, designed to keep the lower classes in their place after plague struck 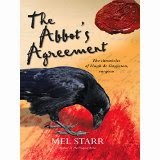 These well-told mysteries are perhaps more slowly paced than a modern thriller, but all of life moved more slowly in 14th century England, and the sense of time and place are a major part of the attraction of this series. The books stand alone, but like in Ellis Peters’ Brother Cadfael series, relationships develop along the way, so they are best enjoyed in sequence, which is why I am anxious to catch up in time for the US release of The Abbot’s Agreement.

Here is a bit of the blurb: Master Hugh is making his way towards Oxford when he discovers the young Benedictine - a fresh body, barefoot - not half a mile from the nearby abbey. The abbey's novice master confirms the boy's identity: John, one of three novices. But he had gone missing four days previously, and his corpse is fresh. There has been plague in the area, but this was not the cause of death: the lad has been stabbed in the back. To Hugh's sinking heart, the abbot has a commission for him

I'm ready to delve into book 5. How about you?

LeAnne Hardy writes 16th century historicals set in England and Wales from her lake home in the northwoods of Wisconsin. Find out more about her life in six countries on four continents and the Glastonbury Grail series on her website.
Posted by LeAnne Hardy