On June 19, I posted here about Going Indie Internationally. At that time, I'd jumped through a bunch of hoops to legally do business in the USA, where most of the self-publishing opportunities are based. I was about to leave on vacation and my EIN (Employee Identification Number) was still pending with the IRS. 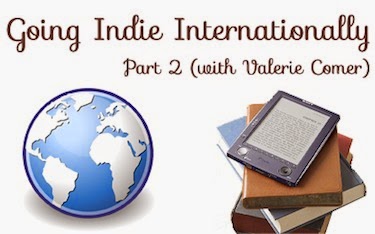 Here's the process since then.

June 19, 2014 I downloaded the template for a 6x9 paperback from Createspace and copy/pasted the Majai's Fury manuscript into it, spending a few hours fiddling with front matter, chapters, and back matter until I liked the look. I uploaded it to Createspace and viewed it in their preview program. Looked good!

Did not try to fill in the tax information for Createspace. One headache at a time is plenty, thank-you-very-much. Thankfully, you can save your progress at various stages before you hit the publish button.

July 8, 2014 Arrived home from vacation to discover an envelop from the IRS.

July 9, 2014 Armed with the paperwork and the EIN for Amazon blog post I'd referred to before, I opened the KDP dashboard and redid the tax information pop-out. This time I was rewarded with a green checkmark instead of a red x. Success! I pushed the button to publish Majai's Fury via Kindle Select. I set the price at 99 cents with the plan to run five free promo days once the story had garnered at least 8 reviews.

July 13, 2014 Finalized the back and spine of the book cover using Photoshop Elements 11 and uploaded the cover to Createspace. I made some changes to my interior file (like adding my ISBN) and reuploaded it. Had a good look at everything…and pressed the button to publish it. I also ordered five copies.

July 14, 2014 Majai's Fury became available as a paperback on Amazon, linked with the Kindle version. It will take 6-8 weeks for it to show up on other e-bookstore shelves, including amazon.ca and The Book Depository.

For the record, Createspace requires a higher minimum retail price on books sold through expanded distribution (required for amazon.ca and TBD, etc) than for books only sold through the Createspace store and amazon.com. So, for the sake of YOU, my friends, family, and fans outside of the USA, I went for expanded distribution ... which makes everyone have to pay a bit more for the paperback. In Amazon's world, this apparently makes perfect sense.

I could have gotten around this by using a different paperback distributor, but that adds cost and complexity, so this seems like the best solution at this time.

July 18, 2014 I created an account with Draft2Digital.com. Those of us outside the USA cannot upload directly to Barnes & Noble's website. Also, if you don't have a Mac you can't upload directly to iBooks. For situations like this, a distributor like D2D or Smashwords comes into play. D2D doesn't have a tax pop-out like KDP does, so I had to download a W8-BEN, fill it out, scan it, and email it to D2D so they wouldn't withhold taxes.

July 20, 2014 I created accounts at Kobo and iBooks. Note that iBooks only allows book uploads from Mac computers. If you have a PC, you can either get a Macster to do it, or you can use Direct2Digital to upload for you. Both sites had complex tax data forms. I recommend having the following information on hand before starting any of these forms:

• Your Bank's transit number
• Your bank's BISAC code (aka Swift code) (I had to call my bank and ask for this, as I couldn't locate it anywhere)
• Your bank account number (I chose to create a USD account at my local RBC branch for more control over exchange rates.)

July 21 I received my paperback copies of Majai's Fury! I'd chosen the matte cover and cream paper, and I'm very happy with the results.

July 29 Having had rights reverted from CNP, I've republished both Raspberries and Vinegar and Wild Mint Tea in paperback and ebook on the afore-mentioned platforms. Yay! All my reviews from the previous edition came along.

I discovered that my MacBook's OS is not up-to-date enough to use the iBook platform, so I added these books to that platform via Draft2Digital.

My fantasy novel, Majai's Fury, will go to Kobo, iBooks, and Nook in October when my 90-day period in KDPS (Kindle Direct Publishing Select) is up. Meanwhile, it's at 99¢ looking for more reviews so that I can run my five free days! 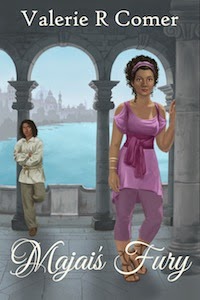 Majai's Fury is a fantasy tale of forbidden romance amid clashing religions and cultures.

A vindictive goddess.
A desperate woman.
A reluctant champion.
A frantic scramble to flee from MAJAI'S FURY.

Taifa hoped the goddess Majai wouldn’t notice she hadn’t provided a firstborn for sacrifice. But when the king demands Taifa’s life in exchange for the child she has not yet conceived, she knows she is out of time. She seizes the king’s proposal—her life spared if she neutralizes Shanh, the foreigner whose doomsday prophecies infuriate the king.

Secure in Azhvah’s protection, Shanh’s mission looks simple enough: deliver his god’s fateful message then return to his homeland. But when Azhvah allows a conniving woman to weaken the shield, many long-held beliefs are shattered. Can Shanh’s god truly desire to rescue this heathen from the fate she deserves?