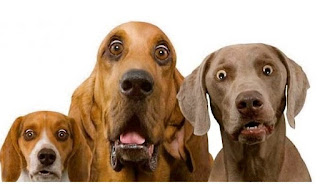 How would you describe these expressions? My take is Shock - Horror - and Consternation.

Sigh, I empathize with these poor hounds. For right now I am in the midst of polishing a manuscript. Well, all we authors do that regularly so what's so bad about it?

Then let me explain. I am changing the multi Point of View of a romance novel into what is acceptable for a publisher's expections of said novel. The fewer POVs the better is the norm. And so here I am, albeit kickin' and screamin' working on "killing off my darlings". At first I thought what an impossibility! But it can be done.

In one scene with two secondary characters I was able to place my main character in a place where she overheard what was going on. Strangely, it was better than the original. In other scenes I wiped away a tear and deleted them. Ohhh, agony! But rereading I found that nobody would probably miss them (because they hadn't been introduced as essential characters.) If our readers could only read our original word packed manuscripts they'd probably get to know even more of the story, but we have to squeeze into the prescribed  rules that publishers expect. OK, maybe they're absolutely correct. 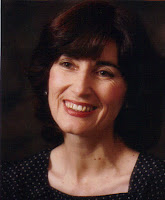 Wouldn't it be good if we could tack on our deleted scenes like movie makers
do at the end of some videos. Many of them are great, some are hilarious, and some let you get to know the characters a little more. It would certainly be an
added bonus, especially if the scenes really aid to the depth of the story by all
those authentic details and descriptions an author must cut.

Still, if the professionals have to edit out whole scenes, even to deleting an interesting character, then who am I (rebellious spirit that I am) to buck at the 'Laws of the Medes and the Persians'?

Rita Stella Galieh is familiar with editing out the superfluous as she writes scripts along with her evangelist husband George for a Christian radio program broadcast Australia-wide. Her weekly blog at http://inspirationalromance.blogspot.com.au shares real life stories of how couples met.  Besides contributing to several US nonfiction books, she has had two historical romances traditionally published and is now working on Book III of the trilogy, Signed Sealed Delivered, The Tie That Binds and A Parcel of Promises.