Persistence is a virtue and I am all for persisting in the face of difficulties and obstacles. But, and it is a big but,...sometimes there is just no other way forward but to give up and start again.


When I lived in Sydney a friend, knowing how I love them, bought me a jacaranda. I planted it with great hope and waited and waited for it to flower. I never saw it happen.  My husband’s job transferred to Orange and we had to move.  Pointless uprooting the jacaranda as it wouldn’t grow in that cold climate. Reluctantly I left it behind thinking at least the new owners would enjoy it when it flowered.


This is a poem I wrote about that time.


All November I ached
for the tiny jacaranda in my garden
that had not been initiated into blue.
I watched large jacarandas
bleaching colour from the sky.
All November I admired
their insistence, the blue larceny
that left neighbouring eucalypts
drab as tarnished pewter.
Then came December
and while Sydney jacarandas
still whispered bluely
through the streets,
we moved to cooler country
where rhododendrons purple
the parks
and elms solid as sandstone
line the streets.
But in all this town
not one tree
wears jacaranda blue.


Imagine my devastation a few years later when I went back and re-visited our old house and saw the new owners had ripped out my precious jacaranda.  I felt like part of me had been ripped out.


I vowed that when we left Orange I would plant a jacaranda wherever we moved. A bit over five years ago we moved to a warmer climate near the coast and I did just that. The plant was watered and fed while I waited eagerly for it to flower. It didn’t. We decided it must be in the wrong place, so we moved it to another spot in the garden and repeated the process of tending it. Another year passed and then another. It still did not flower. This year, the fifth year of waiting, I had high hopes it would be big enough to flower. But again not a flower appeared. Then we’re not sure whether it was violent winds or vandals but our little jacaranda was partly destroyed. On closer inspection my husband found it also had some sort of disease. We agreed it was hopeless. Time to face facts, this jacaranda was doomed. I had to give up on this jacaranda. It was never going to flower.


So I went up the nursery and priced another jacaranda. ‘It will flower in twelve or eighteen months,’ I was assured. Forgive me if I was sceptical. I’d heard that story before. I resolved not to buy one unelss it was already flowering. I priced a taller jacaranda and nearly had a heart attack when I heard the price. Yet it still didn’t have flower on it. But I'd learned my lesson. Needless to say it was a case of no sale.


A few days later my husband and I took off  down  for a drive down the coast. What started out sunny turned into a dreary grey day. We saw a nursery and called in. He had tall jacarandas and yes, they either had buds on them or were flowering.  With trepidation I asked the price. Imagine my delight when the price was less than quarter than that of the larger unflowering ones we had seen! What’s more the man in this nursery really seemed to know what he was talking about, as I quizzed him about the requirements and right position in the garden for the tree. Elated I choose my jacaranda and brought it home. The next day while I was out my husband took out the old misshapen tree and planted the new one. And the weather turned way hot all of a sudden. I despaired for my tree and ensured it got watered and fed often.


Imagine my joy when a couple of weeks later the buds turned into jacaranda blue flowers. I rushed out and took a photo. Sorry I tried to post a couple of pics but couldn't get it to work for some bizarre reason.


Back to the jacaranda though. It made me think about the writing life. Sometimes I have had obstacles and have pushed on with a project regardless. Other times no matter what I have tried, a poem or story refuses to work. I am faced with a choice. Either persist or give up and start on something new. At times in my life I’ve known it’s time to do what I had to with the jacaranda. I’ve had to admit defeat and start again.


Sometimes that may mean starting over on the same piece of work but looking at it from a different angle or a trying it from a different point of view. Other times, it means shelving it all together and starting a new project. The trick is to know when it is time to move on and admit defeat or just to change focus.  So my question is how do you know when to keep going or when to give up with a writing project? 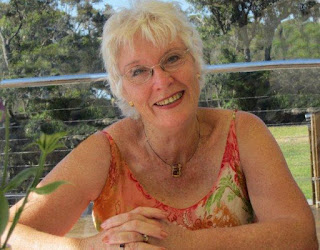