Fay Sampson on Her New Book The Hunted Hare 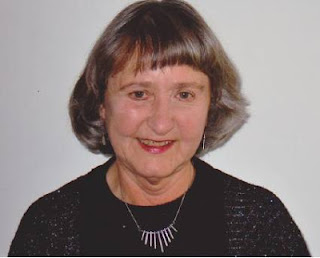 I am so pleased to have as my guest again today the prolific author of history and mystery Fay Sampson. I've asked her to tell us about her newest book  The Hunted Hare which has just been released in North America, having been out in the UK for some months.

I was privileged to review the book and found it is a truly lovely book with characters you really want to spend time with, a beautifully developed background in mystical Wales and a plot full of twists. It’s amazing how Fay balances realism and mysticism, poignancy and mystery. I’m so glad this is the first of a series because I want to get to know Aiden and Melangell better.

And now, here's Fay to tell you about the plot and the background of how she came to write The Hunted Hare. 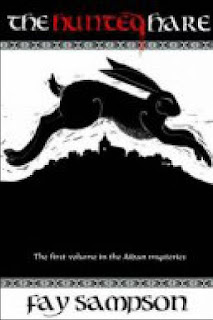 Aidan and Jenny have brought their young daughter Melangell to see the sacred place for which she was named. Pennant Melangell has a small pilgrimage church surrounded by yews going back thousands of years. Inside, carvings tell the legend of the saint who protected a hare from the hunters. It has long been a place of healing. Jenny is suffering from cancer and has been given months to live.

The tranquillity of this remote Welsh valley is shattered by a violent death from an arrow. Who, in this small community, is responsible? Even Jenny comes under suspicion.

Undercurrents seethe below the surface, involving both staff and guests at the House of the Hare where the Davisons are staying, and the local residents.
When it seems that Jenny may hold a vital clue to the murderer’s identity, the Davison family themselves are in danger. Can Aidan save them?


Background. I was on a course, studying the ancient Celtic history of Wales. We were taken on a field trip to a remote valley in the hills of Powys. A dead-end road led us to an ancient pilgrimage church set amid meadows by the river. A little further on, the road ran out at the foot of the mountains, down which tumbled a high waterfall.
Even before I entered the church of Pennant Melangell I was struck by the peace that hung over the valley. This is one of those "thin places", where the physical and the spiritual come close.

Melangell was a 6th-century Irish princess, who fled to Wales to escape a forced marriage and became a hermit in this valley. One day Brochwel, prince of Powys was out hunting. He discovered her praying in a thicket, with the hare he was chasing hiding under her skirts. The hounds backed off, howling, and the horn stuck to the huntsman’s lips. Brochwell was so impressed with her courage and sanctity that he gave her the land to found an abbey and to be a refuge for the hunted. Her legend is carved over the rood screen in the church. In the chancel there is a shrine where people lay cards of thanks or prayer. The apse beyond has a slab of rock which was probably her original grave. The medieval shrine, to which pilgrims came for healing was destroyed at the Reformation, but more recently pieces have been salvaged from where they were thrown or reused and the shrine rebuilt.

This was my setting. The couple who come here have a daughter named Melangell.

Fay Sampson has been a published author for 38 years. Starting with children’s novels, she became best known for her Celtic fantasy series Pangur Ban (Lion). She gave up her first career teaching mathematics to concentrate on full-time writing, and branched out into novels for adults. The five-part sequence Morgan le Fay tells the story of Arthur’s half-sister, and shows that there may be more to her than the wicked witch and failed seductress of popular fiction. Star Dancer does the same with the Mesopotamian myths of Inanna. A number of historical novels followed, set in Dark Age Britain. More recently, a novel about a woman researching her family history, one of Fay’s enthusiasms, turned into a crime novel, blending dark deeds from the past and present. This has become the Suzie Fewings series (Severn House). The Hunted Hare is the first of a new crime series, The Aidan Mysteries, for Monarch/Lion. They will be set in sacred places around the British Isles.

She lives in a 16th-century cottage in Devon, the county where half her ancestors have lived as far back as she can trace them. You can visit her website here: http://www.faysampson.co.uk/

Posted by Donna Fletcher Crow, the author of 40 books, mostly novels dealing with British history. The award-winning Glastonbury, A Novel of the Holy Grail, an Arthurian grail search epic covering 15 centuries of English history, is her best-known work. She is also the author of The Monastery Murders: A Very Private Grave and A Darkly Hidden Truth, as well as the Lord Danvers series of Victorian true-crime novels and the romantic suspense series The Elizabeth & Richard Mysteries. For more information go to: http://ning.it/ca9gTf
Posted by Donna Fletcher Crow