DEVOTION: Are You Ready? 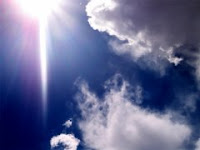 When I first gave thought to this devotion, I looked at the date. 9/11. Oh wow. How the years have passed, I thought. Who can believe that it is 11 years since that day of horror in America, when terrorist attacks killed several thousand people?

I then wrote this devotion and posted it on-line. That night, while lying in bed, it hit me. When American writers put 9/11, they mean September 11. When we South Africans (and many other countries) put 9/11 we mean November 9. I had written a date-related post for the wrong date!

Ah well. As Brownies and Girl Guides, or Cubs or Boy Scouts, we all learned the motto, "Be Prepared!" As a writer I should have been better prepared and written this days ago. (I normally do. Life got in the way!)

However, is the message not still relevant? I think it is. So please read on.

For me, living in far-off South Africa, you would think that horrific terror attack wouldn't have any impact. After all, it was not my country under attack. Yet the entire nation came to a horrified standstill. Life was put on hold as we stood in front of our television screens. Ask any adult the question, "Where were you when you first heard the news of 9/11?" and they can tell you.

As we look back, we can doubtless remember some of the hundreds of stories that came out of that time. Stories of people rushing back when safety was within their grasp, to rescue others. Stories of police and fire-fighters, willingly racing up those stairs to save others, knowing they were unlikely to escape with their own lives. Stories of a group of strangers joining as a team to prevent yet another act of terror against a significant building. Stories of ordinary people who became heroes and heroines in the space of a few hours, when they gave their lives that others might live.

Despite the dreadful loss of life, approximately 14,000 people evacuated the building. There were safety measures in operation. There had been practice evacuations. Some firms were better than others in their attempts to "be prepared". Some even anticipated an eventual terror attack. Many were prepared to deal with the emergency, although none could have estimated the magnitude of the horror.

In Thessalonians chapter 5, Paul says, "You know as well as I that the day of the Master's coming can't be posted on our calendars. He won't call ahead and make an appointment any more than a burglar would. About the time everybody's walking around complacently, congratulating each other--"We've sure got it made! Now we can take it easy!"--suddenly everything will fall apart. It's going to come as suddenly and inescapably as birth pangs to a pregnant woman. But friends, you're not in the dark, so how could you be taken off guard by any of this? You're sons of Light, daughters of Day. We live under wide open skies and know where we stand. So let's not sleepwalk through life like those others. Let's keep our eyes open and be smart." (5:2-6 The Message)

Paul wasn't talking about a terror attack. He was warning us of the day when the Lord will come again. Even today, we are surrounded by warnings to "be prepared." Apart from terror attacks, we have wars, hurricanes, freak storms, tsunamis, earthquakes, or on a more one-on-one level,  cancer diagnoses, AIDS, radiation sickness . . . We are surrounded by reminders that this life is temporary.

In Philippians 1:22-24 Paul says, "As long as I'm alive in this body, there is good work for me to do. If I had to choose right now, I hardly know which I'd choose. Hard choice! The desire to break camp here and be with Christ is powerful. Some days I can think of nothing better. But most days, because of what you are going through, I am sure that it's better for me to stick it out here." (The Message)

So let's practice for evacuation by reading our Bibles, praying, spending time with the Lord and with other Christians. We need to make sure we know the procedure, and that we are passing on the information to others who don't. Let's check on our safety procedures so that when the time comes, we are ready.

"This is how much God loved the world: He gave his Son, his one and only Son. And this is why: so that no one need be destroyed; by believing in him, anyone can have a whole and lasting life." (John 3:16 The Message)

OVER TO YOU: One day, God will be calling for you and for me. It will be our time to evacuate this earth. Are you ready? What do you still have to do?

SHIRLEY CORDER lives on the coast in South Africa with her husband. Her book, Strength Renewed: Meditations for your Journey through Breast Cancer contains 90 meditations based on times when God spoke to her during the rough times spent in the cancer valley. Please visit Shirley at ShirleyCorder.com, where she encourages writers, and at RiseAndSoar.com, where she encourages those in the cancer valley. Follow her on Twitter or on FaceBook, or sign up for her newsletter.

Email ThisBlogThis!Share to TwitterShare to FacebookShare to Pinterest
Labels: Are you ready, Be prepared, devotion, Shirley Corder