It's funny how things change over the years - going from the dreaded to the beloved in a short flicker of years. In some cases, the things I once despised have become my closest allies; the things and people I often thought were truest and best seem to melt away into a distant memory of disappointment. The friends I thought would last forever have not, in many cases, and the friends I barely knew became dearer to me than I ever thought possible.

Growing up in the Shenandoah Valley in Virginia, with all its small-town color and spreading farms, I feel this cruel paradox first-hand. I disliked growing up among farmer's families, the high school hallways filled with the tromping of cowboy boots and pale-circled cans of Skoal chewing tobacco worn into denim back pockets. Jacked-up pick-ups peeling out of the high school parking lot in an obnoxious spray of gravel, and endless lunchtime conversations about fishing, deer hunting, and cattle castration (really).

In French class I would study the photos in our textbooks of people across the sea, wondering what life was like in Paris or Bordeaux or Marseille - how different it could be if I had grown up in urban Europe instead of rural Virginia - and what life and color outside of Augusta County I'd already missed.

Only I was there, in Staunton, Virginia, with no hope of seeing Europe or even traveling to another state.

Instead I rode the school bus and did my dutiful pages of biology homework and wished. And dreamed.

For the start of school meant one of my least favorite parts of life in Virginia: fall.

The time when leaves turned gold, and visitors flooded into the Valley with cameras and camcorders. Pausing besides roadsides turned rust and blood red with sugar maples, bleeding scarlet into the blue-violet splendor of the Blue Ridge Mountains.

And then there was me. Cold, with clammy fingers, waiting for the bus on too-early fall mornings. Breath misting, missing warmth of summer days. Shivering and sleepy, watching mists roll up at the foot of the mountains - mountains I would not see again until three in the afternoon, and hills that I could never explore. Watching the glorious green leaves of summer turn lemon yellow and pumpkin orange and then a dull brown, falling from the tree limbs in silent ignominy.

Fall - the season of football and hunting (two things I cared little about) and the inevitable return to school. Sweaters instead of tee-shirts, jeans and socks instead of sandals. Alarm clocks at frosty, coal-blue dawn instead of breakfasts at a sun-splattered table. 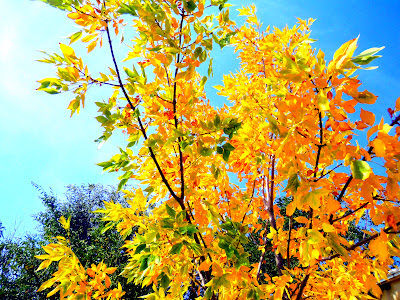 And now, after all these years, fall has come again.

Only this time it is different. 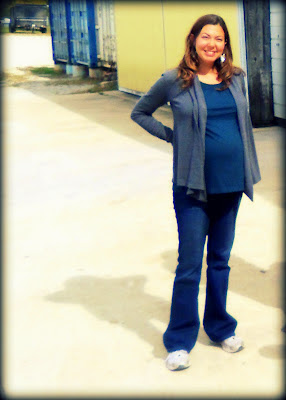 After nearly ten years abroad, and eight of those in a tropical country with no "fall" to speak of - or even a noticeable changing of the seasons - the memories came back to me, haunting me at the edges of my dreams. Tales of cinnamon-laced pumpkin pies at Thanksgiving, and the joyful rain of golden-yellow leaves that poured from the maple tree in our yard growing up. The hillsides burnished with smoke, and the rural roadsides turned to flame. The crispness in the air, like a ripe apple, and the unexpected, tingling warmth of hot chocolate or farmer's market apple cider from a steaming mug.

That peculiar slant of sun that is not quite summer but not quite winter, warm and glowing, beaming out its last splendor over the dried corn stalks and frosty fields. Reminding me of years past and years to come, of changes and fresh starts and seasons that herald something bigger than myself - yes, even bigger than all of us.

And end and a beginning, and a familiar friend that I had long ago forgotten.

And that is how fall became the thing I longed for - missed - sometimes with homesick intensity all those years in Brazil, where tropical flowers bloomed year-round, and the sky always hung blue and warm over heat-rippling city concrete.

I missed - if I can put it this way - the lack, the slipping, the fading. The painful dying of sunlight. The crisp and bittersweet slide into frozen winter, and the warning of the sugar maples that it is coming, and coming soon. The urgency of the golden leaves that whisper - shout - in throaty voices to step, memorize, store up your moments - for tomorrow the frost will lie heavy, and the brilliant leaves will mute themselves into drab browns and grays.

One by one the trees will die back for the winter, lying silent under a shroud of snow.

We need the loss, the reminder that all is transient, all is fleeting. That the reality we know is fading into an eternal one - an everlasting kingdom - and that we are all destined to die, and yet to live - and to live forever.

But first we must pass through the winter. 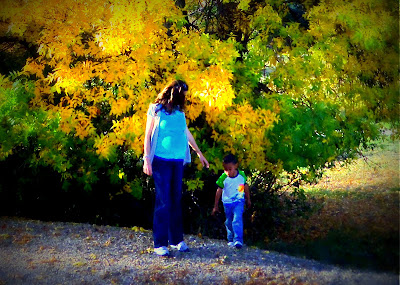 Far from being a dismal and grim harbinger of the loss of summer, fall has become dear to me. I miss its fiery colors, its snap of blue sky. The pungent scents of cinnamon and cloves, of pumpkin and gingerbread and baked apples. The memory of smoke boiling up from old-fashioned apple butter kettles over an open fire, and the speckled stack of gourds and squashes on a neighbor's front porch.

For fall, in the truest sense, is harvest.

It is the culmination of everything we have enjoyed all year long, storing up the memories through spring and summer. It is the reward for long, hard work, and the reminder that even in loss, there is fullness. Even in aching decline, there is glory.

And after so many years away from my country and my land, my memories, I am home. Welcomed by a profusion of maize-yellows and goldenrods and burnt oranges where I least expect it, glowing under a sapphire blue autumn sky.

Reminding me of cool mountain falls so many years ago.

For the enemy, you see, is not always what we think it is.

Sometimes it is the things we think will bless us - the trappings - the distractions - the things God so graciously withholds so that we can become better people.

Sometimes the enemy is us.

Demanding what we think we want and rejecting the true God and His hard way for the easier life. Or the life we think will be easier. Fighting death and old age with an arsenal of weapons and potions, while all the while missing the point: that we were made to grow old. We were made to die. And in our living and our dying, to bring glory to God. To grow and change and become wiser people, through all those dark moments of suffering and injustice and slow, relentless aging.

The real blessing, as we so often discover, lies in the secret places. The despised things. The pain and night prayers that seem to go unanswered, or the fallow years that appear to show no fruit. The things that build in us everything we've ever needed to be strong and humble followers of Jesus Christ.

"But we also glory in our sufferings," Paul wrote, "because we know that suffering produces perseverance; perseverance character; and character, hope."

Hope. Did you ever think that fall is hope?

And therein lies the secret of fall: our hope of glory in the face of death and decay. The world turned upside-down by God's kingdom. The first who shall be last, and the last who shall be first. The King of the world who was birthed in a cattle stall, and the riches of this life that He says are of no account. The family, heritage, and educational credentials that Paul says are nothing more than "rubbish," and the eternal house we build with either gold, silver, and precious stones, or hay and straw.

For our earthly works will be burned up - and only what lasts for eternity will be left.

I step out into the autumn morning and breathe in His promises, dandelion-yellow against blue, and relish the cool winter wind that blows down from the north, like welcoming a long-lost friend. Thrilled beyond measure to be alive in South Dakota, now, on this day, at this moment.

And to be alive in frosty, stunning, achingly beautiful fall, surrounded by gold. 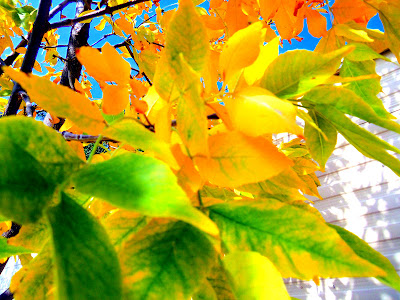