Persevering with point of view!

These past few weeks have been quite tumultuous in my writing journey, as I have tried to edit two manuscripts at once – my first non-fiction work, entitled Soul Friend: the story of a shared spiritual journey, and my sixth novel, The Inheritance. With my non-fiction book, my new publisher wanted a few things changed – and rightly so. While it took some time to do, it was nevertheless reasonably straightforward. However, it was another matter altogether with my sixth novel. You see, I had decided I would try something new. I would have two main characters and would write from both points of view, according to what fitted best. But I would also write from the points of view of several minor characters, where necessary. In other words, I was venturing into ‘multiple point of view’ territory.


Now being a rookie at such things, I was bound to make mistakes. With my first two novels, I had stuck to omniscient point of view. In fact, back then, I didn’t even know what that term meant! I simply wrote in the same style in which many of the older books I loved were written. Over my next three novels, I gradually refined my style and wrote from the point of view of my main protagonist, although I’m sure I often strayed into omniscient point of view out of habit. But now, in trying to be clever, it soon became clear, from my publisher’s comments, that I had skipped from one point of view to another far too often. Sometimes this was intentional – I felt it worked that way. But mostly, I have to admit, it was unintentional – I had happily hopped into someone else’s head for a few lines, before proceeding to hop to another one – and then to another again! It was as if all my characters were joining in the conversation, each with their own little agendas.
So ... now I had quite a rewrite on my hands. I sighed – I did not need such a large job at that point. However, once I had begun, I soon discovered how much I was learning. In fact, it became an interesting challenge to see how the various scenes could in many cases happen just as easily from the point of view of one of the main characters and not one of those minor characters who kept wanting to get in on the act!


Now I am on the other side of that rewrite – and I hope I have succeeded in vastly improving my manuscript. But all this has served to show me yet again that there is always so much more to learn in this writing business – so many new things to come to grips with and new ways to refine our writing style. Will I ever ‘arrive’ as an author? I don’t know. But I do know I’m going to keep on trying. I want to write the best fiction – and non-fiction – I can for God. As Paul writes in Philippians 3:13, I want to forget what is behind and strain towards what is ahead. I may never write that best seller, but I sure know I can improve from where I am now.
Somehow I don’t think God has finished with me yet, moulding me into the author I am meant to be. How about you? Is that how you feel too? 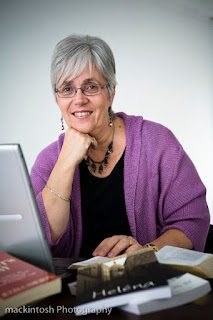 Jo-Anne Berthelsen grew up in Brisbane and holds an Arts degree from Queensland University. She has also studied Education and Theology and has worked as a high school teacher and editor, as well as in local church ministry. Jo-Anne loves communicating through both the written and spoken word and currently has five published novels – ‘Heléna’, ‘All the Days of My Life’, ‘Laura’, ‘Jenna’ and ‘Heléna’s Legacy’.  She is married to a retired minister and has three grown-up children and three grandchildren. For more information, please visit her website, www.jo-anneberthelsen.com.