All the Way to Taz by Marcia Laycock 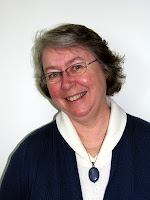 The fun thing about the internet is that you can connect with people from all over the world. I've been trying to boost the number of 'likes' on my Facebook author page (www.facebook.com/marcialeelaycock) lately, so I've been running contests now and then for a free book.  I was a little dismayed but then delighted that one of the winners was from Tasmania - that small island just off the coast of Australia. I was dismayed because I knew the postage would likely be more than the value of the book, but then delighted to think that one of my books would make its way to such a far-off place.

That's the fun thing about books too - they can and do travel. When I published my first book, a collection of devotions published in a local newspaper, I was amazed at where the book ended up. I thought it would be strictly a local effort, purchased by readers who knew me in the area where I lived. Then one day I received an email from India. A pastor there had been taking courses at a Bible College in Canada and someone had given him a copy of Spur of the Moment. He read it and then sent it to his son in England. That young man emailed to say the book arrived when he was particularly discouraged and he wanted to tell me how much it had helped him.

India! England! And now Tasmania! A long way from a small town in central Alberta Canada.

It makes me think of that scripture verse that says, "Now to him who is able to do immeasurably more than all we ask or imagine, according to his power that is at work within us, to him be glory in the church and in Christ Jesus throughout all generations, forever and ever! Amen" (Ephesians 3:20-21).

Never underestimate the power and reach of our Lord. He will accomplish his purposes through us, no matter how small our imaginations.

****
Marcia's new novel, A Tumbled Stone has just been released. Visit her website at www.vinemarc.com
Posted by Marcia Lee Laycock