In January I read a blog post by Mary deMuth. She wrote about how she asked God to give her a picture for the year. I thought this was a great idea and decided to follow suit. I prayed about it and considered several photos, but “Through the Window” by photographer Derek Stedall was, without any doubt, the one for me.

I love Derek’s photos , but this is the first one I saw and it holds a special place in my life. Isn’t it an amazing picture? 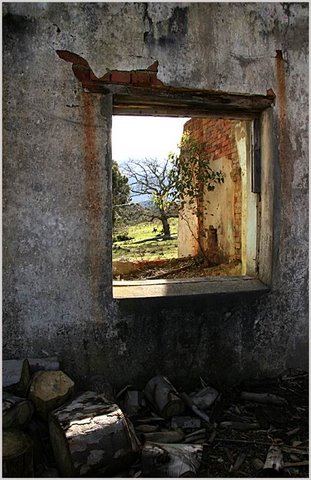 THROUGH THE WINDOW      "Take time off to look past whatever rubble is surrounding you now and look towards the blue sky through the window! "   Derek Stedall

In the email accompanying the photo, Derek described driving east-west  along the North Dune road in the Kalahari desert, where the landscape was "grass covered dunes, formed millions of years back by the prevailing winds, into a roller coaster rhythm of up and downs"  As he crossed the dunes, there were occasional warning signs to keep left (we drive on the left side of the road in South Africa) and he never knew what to expect as he crested each dune.

He went on to chat about how we often worry that the "blind rises" of life are potential head-on collisions instead of seeing them as new and better horizons. “So very often we are so engrossed in the negatives that surround us that we miss out on making the most of the possibility of all of the positives that should rather be explored!” At the time he was reading “The Art of Possiblity” in which the authors, Benjamin Zander and Rosamund Stone Zander, encourage readers to explore the positive possibilities of life situations rather than reacting negatively when things are difficult.

Some months later Derek saw the ruins of a farmhouse while he was traveling in the Hemel en Aarde Valley (Heaven & Earth Valley) in our Cape Province. He stopped and took several photos, including “Through the Window”. His message with the photo was “Take time off to look past whatever rubble is surrounding you now and look towards the blue sky through the window! - Explore the Zander possibilities that are waiting just over the next dune rise.”

Why did I choose "Through the Window" as my picture for 2012? Well apart from the fact that it's a downright stunning picture, it speaks to me, inspires me and encourages me. My husband and I are renovating a cottage for our retirement. It’s a huge task and so easy to be overwhelmed by a myriad of negatives, which  includes literal rubble, but Jeremiah 29:11 tells me that God has plans for us and the future, that He will give us hope and not harm us.  Derek’s photo reminds me to look through the window of trust in God to see the blue sky of God’s love and provision.