The Courage of Everyday Heroes | A Guest Post from Joan Campbell 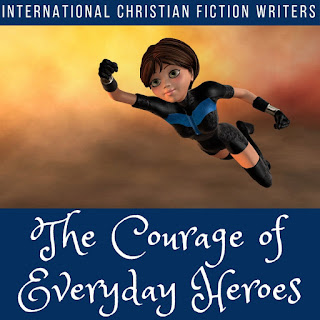 As a fantasy writer, I’ve created my fair share of epic heroes.


Generally, these characters are good with swords, bows, arrows—anything sharp, in fact. They’re faster, smarter and deadlier than the bad guys. They laugh in the face of danger and seem to have no fear. Courage should be their middle name (note to self for next book). These are the guys and girls who outwit, outplay and outlast, and if they don’t outlast it’s because they’ve heroically sacrificed themselves for another.

As much as we love these stereotypical heroes, I believe they do a disservice to the words ‘hero’ and ‘courage’.

Take a moment to consider this: who is the most courageous person you know?


It doesn’t take me long to cast my eyes around and find the true heroes in my life. My niece, battling major depression, who gets up every morning to take care of her little Pekinese and has just enrolled herself in a draftsman course. The man with a speech impediment who stands up to speak at Toastmasters. My daughter, on the Autism Spectrum, taking the first steps at independent living this year.

These people are not laughing in the face of danger. They’re not always smarter or faster or stronger than their neighbour. They have plenty of fear, and wouldn’t call themselves courageous. But that is precisely what they are.

My country’s most courageous hero once said, “I learned that courage was not the absence of fear, but the triumph over it. The brave man is not he who does not feel afraid, but he who conquers that fear.” (Nelson Mandela) 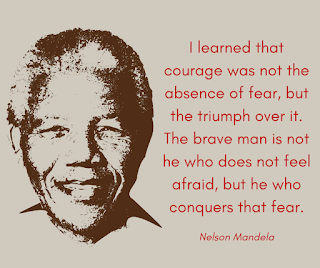 Each of us needs courage to get through the specific challenges we face.


On my own journey as a Christian writer, I’m starting to realise that this is the one quality I need in abundance. It’s not always easy sitting in front of a flickering blank screen and starting to type. Fear creeps in. What if no-one likes this? What if I begin but then grind to a halt? Perhaps I don’t have what it takes to be a writer.

If you manage to conquer those fears and actually produce a manuscript, a whole new set of fears kick in. Literary agents give you the brush off and rejection letters from publishers start to pile up. It’s difficult to keep writing when everything seems to tell you to give up. It’s very easy for discouragement to set in.

Dis-COURAGE-ment. Have you ever noticed the word courage in the centre of that?


Discouragement steals away our courage. It lets fear take hold of us and dictate our feelings and actions. Discouragement is not easy to shake, but shake it we must. Even if it’s taking just one small step forward. I’m not sure what that small step is for you. Perhaps:


Others might not recognise the bravery in that single step, but take it nevertheless.


And be en-COURAGE-ed. I applaud you for taking the step. Well done, Brave One - you did well today!

We’d love to hear and celebrate your stories of courage and small steps. Please share them in the comments below.

Joan Campbell is a contributing devotional writer for The Upper Room and Scripture Union. Her first book Encounters: Life Changing Moments with Jesus is a collection of short stories, reflections, prayers and art. She particularly loves writing engaging fiction with the underlying message of God’s grace.

Her fantasy trilogy The Poison Tree Path Chronicles, published by Enclave Publishing, consists of Chains of Gwyndorr (winner of the 2017 Illumination Award), Heirs of Tirragyl and Guardian of Ajalon (releasing 11 September 2018). She and her husband Roy live in Johannesburg, South Africa, about an hour away from Pretoria, where their two daughters study. 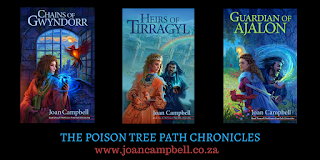