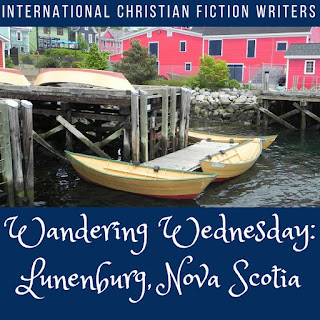 The South Shore of Nova Scotia anchors my childhood roots, thanks to vacations and weekends that often took us “down home”. My grandparents, and the cabin retreat Dad built, were inland from the ocean shore, but I grew up absorbing the region’s rural atmosphere and appreciating its beauty.


Lunenburg, Nova Scotia, is a real town—a UNESCO World Heritage site with thousands of visitors each year. A prime location for my inn, which is actually a bed and breakfast. And (she rubs her hands gleefully) somewhere ripe for a mystery writer to wreak havoc on locals and tourists alike.

The Green Dory Inn lies outside of town, on a winding coastal road, and so far I’ve only seen the spot on Google Maps (I got lost when I tried to find it in person).

Although I needed to adjust the landscape around the inn to suit the story—it’s a fictional building, after all—I’ve enjoyed wandering Old Town Lunenburg itself to cultivate a sense of the place.

A walk along the harbourfront on a summer day meets a sharp hint of tar from the wide, sun-baked boards of the pier. Whale watching and harbour tour boats offer excursions, and depending on the day, Nova Scotia’s signature schooner, the Bluenose II, may be in port.


The bright red Fisheries Museum of the Atlantic at the end of the boardwalk provides a look back in time at the lives of fishermen and their families, privateers, and rum-runners.

At the street edge of the harbour walk, horse-drawn open carriages stand waiting for fares. I assume it’s a short ride, since much of the town is uphill—steeply uphill—from the water. 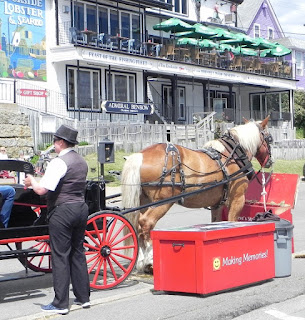 Inns and restaurants line the street across from the boardwalk. Up from there (my legs protested the climb) are more streets paralleling the harbour, crammed with a delightful array of gift shops, inns, and more places to eat. Seafood is a popular choice, and many of the inns and restaurants bear nautical names.

Dressed stone is reserved for old, elegant churches and at least one bank. Most buildings are wooden, in vibrant blues, yellows, and reds, often bearing a variation of the extended dormer window known locally as a “Lunenburg bump.” 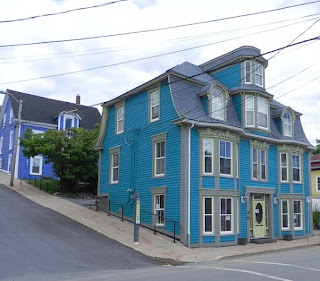 Intriguing window displays line the sidewalks, and it’s worth raising your eyes to see the metal cut-outs of fish attached to the utility poles. 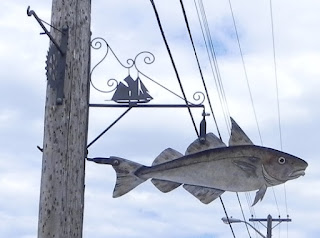 Something I didn’t know until my most recent trip was that during WWII there were Norwegian soldiers training in the town after the invasion of their homeland. Hmm… how will this work into my present-day stories?

I’d like to finagle one more trip to Lunenburg, because I’m told that the Knot Pub makes a fantastic peanut butter pie. Since none of the real-life businesses are used in the Green Dory Inn series, I can’t exactly call that research—although it would give me another chance to listen to local residents and steep in the atmosphere.

Writers, if you set your stories in a real location, do you include a favourite café or other spot, or do you invent establishments for your imaginary friends to visit?

Readers, which do you prefer? 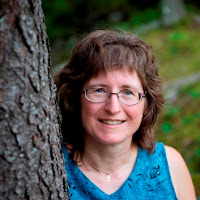 Janet Sketchley is an Atlantic Canadian writer who likes her fiction with a splash of mystery or adventure and a dash of Christianity. Why leave faith out of our stories if it’s part of our lives? Her Green Dory Inn series is set near the picturesque town of Lunenburg, Nova Scotia. Janet’s other books include the Redemption’s Edge Christian suspense series and the devotional collection, A Year of Tenacity.

You can read the introduction to Unknown Enemy below: