Recently Erin, one of my talented granddaughters, took a sheet of her sister's manuscript paper and doodled with a pencil. She created this exquisite piece of art which expresses her love for ballet. She pours all her emotions into her dancing and, apart from one or two exceptions, each little ballerina on the paper represents a ballet pose. She added several quotes to border her work.

At first I wondered if a musician could see these ballerinas as notes and play them on an instrument, thus translating them into real  music. But no, I learned that this wouldn't work as, translated into writing terms, the notes were like random words written on the page, with no punctuation.

A friend looking at the picture commented that she saw freedom—nothing was bound and everything flowed. As I looked at the tiny figures, I realized that they could portray Jacinta, one of my heroines, at the end of her story. At the beginning, she is chained by her fears and all tied up in knots, like a stiff jerky ballerina with aching limbs, but over time she learns to stretch, move forward and leave her fears behind, until she is free to dance with the same joy and happiness that emanates from Erin's ballerinas.

And so this picture, soon to be framed and hung in my writing room, has become a prompt to keep my goal for Jacinta in sight as I pen her story. I aim to leave my readers with a sense of hope and joy as Jacinta achieves her freedom and happiness.

Friends and family contributed their insights and ideas when asked to look at the picture as a prompt to make or do something creative if they had unlimited resources.  Here are some of their responses:

I haven't met Tabitha yet, but I do know she is the sweetest little girl ever and I would love to make her a patchwork quilt in shades of pink, lilac and lavender with each block featuring a ballerina . And if I had the know-how, I'd make a set of wind chimes—either pottery or glasswork—with a little ballerina on each chime to hang in her room to make music for her.

Now it's over to you as I go back to Jacinta, who's waiting off stage, waiting to dance through my novel. Please leave a comment after the picture and tell me your response to Erin's work. 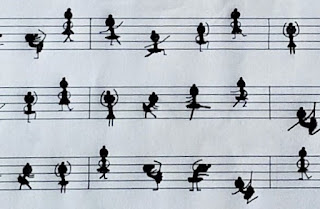