Early in my writing, I attended Sewanee Writers' Conference in Tennessee and heard an author's setting be described as another character in the story, that's how well-developed, how alive the location felt. I knew I would have to rise to that challenge. To write a New York City story without a spotlight on the city would be like presenting an under-baked cake at a wedding and watching it collapse from within.

So I thought about how the setting could interplay with my protagonist Ava and move the plot forward at the same time. I didn't want to devote paragraphs to describing the city just for the sake of adding description. That would slow Ava's journey down. I wanted the city to breathe life into the story, naturally, unobtrusively, and set the plot line ablaze with its unstoppable energy.

How exactly did I bring the setting alive? Here are four strategies I used, with examples: 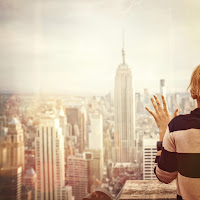 Your setting can symbolize your protagonist’s goals. Ava, a small-town girl with drive and tenacity, wants to make her life in Manhattan. It appears she has when the novel opens at City Hall. She attends a civil ceremony with her fiancee as witnesses, and the contrast between their friends' impromptu exchange of personal vows and her extravagant long-planned wedding is striking. But instead of anticipating her big moment, just a month away, Ava finally sees what's missing: sincerity . . . real love. Slowly, her life goals start to change, and it's hinted at in the setting.

On the second floor of City Hall, they found a room marked by a piece of paper that read, Marriage Licenses. The manila-painted room with crooked rows of chairs had the ambiance of an under-funded public school classroom. An old chalkboard stood forsaken at the rear. It was like being a student again, but in the wrong class. 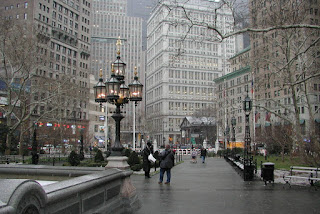 There are many scenes throughout I Always Cry at Weddings where the setting reflects Ava's feelings. The intention is to enhance the emotional pull throughout the story and to make it feel natural by weaving it into Ava's surroundings. Below are examples from three different scenes. You should have a sense of how Ava is feeling after reading each one.

1. She watched as the cab drove away. On sunny days, the leafy trees lining the sidewalk played shadow games in the flowerbeds below. But not today. Her street, masked in fog, told a different story, maybe the real one, of want and neglect. But this was her life, and there was nowhere else to go.

2. Down a narrow and winding path, where a small cove nestled a pond, they stopped to watch a family of ducks nudge the Lily pads. (Central Park)

3. Ava threw her phone down on the table. She tugged the kitchen window open, stuck her head outside and screamed, “No more at least!!!!!” She shouted at her neighbors, over the rooftops, to the pigeons taking flight. “I’m sick of settling!!!!!!”

The radio across the way was silent. Cars stopped honking. No sirens to cause alarm. The city listened . . . and would hold her to that moment. 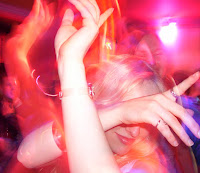 NYC embodies the times in which Ava lives and the culture that might effect her decisions:

When Ava stumbles in the way of temptation, I want it to feel realistic to the point of adding suspense. Here's a night out for Ava. She's not into drinking alcohol, and can't afford it, but she's hoping to connect with a guy she had just started dating and to meet new friends. The wild ambiance of the nightclub as Ava enters makes you worry for her, and it sets her apart from the scene, despite her attempts to fit in.

Two stops on the R train and she found Julian’s downtown hangout. The steel door seemed impenetrable, except for music spilling over onto the street. A bouncer opened the door for her. Inside, a band played on a dark stage at the back of a long candlelit lounge. Large, garish paintings hung on rough walls. They looked like abstracts, until enlarged body parts revealed themselves: feet, hands, buttocks, thighs, some parts more recognizable than others. 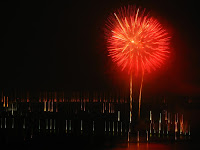 Your setting can play a role in your protagonist's arc. As Ava redefines herself, she notices changes in the city, as well, some changes whisking her along, and others leaving her behind.

She closed her eyes and rested her head against the cool façade of her building. Would it be so horrible to fall asleep right here? Several distant explosions sounded in the direction of New Jersey. She opened her eyes as a cascade of colored stars lit up a corner of the sky. Here was life turned upside-down. Oddly enough, a clearer perspective.

The plot you build needs a foundation. Whether you use "setting as character" or as a backdrop to your story, work it into the action, the dialogue, and into moments of reflection, and make it count.

I Always Cry at Weddings ends with a sunset wedding. Ava, a guest, is on the terrace enjoying the wide view of Manhattan with the man she finally hopes to marry, one day. The final scene closes out on love and the city:

Couples on the terrace held each other, entranced and content, as if they were conduits between the city lights below and the stars above. Maybe the real purpose of love was to channel kindness, generosity, and acceptance from Heaven to the human race. 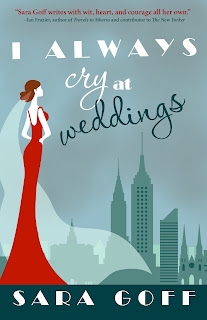 I’m offering a printed copy of I Always Cry at Weddings to one randomly chosen commenter, worldwide.  To be entered in the Giveaway, please include your email within your comment, for example: saragoff(at)saragoff(dot)com.

Sara Goff recently moved to Connecticut with her husband of 14 years and their two sons after living in Sweden and then London for six-and-a-half years. I Always Cry at Weddings, her debut novel about figuring out life and finding love in New York City, was released September 15th by WhiteFire Publishing. A part of the proceeds from the book will go towards her educational charity Lift the Lid, a 501(c)(3) tax-exempt organization. Visit www.lift-the-lid.org for more information on the charity.

~ Places to Connect with Sara ~