Penelope Wilcock Talks about The Hawk and The Dove Series

My guest today is Penelope Wilcock, author of the wonderful The Hawk and the Dove series. Welcome, Pen. Penelope, I’m so delighted to have you as my guest on International Christian Fiction Writers today.  I have been a fan of The Hawk and the Dove Series since they first came out in 1991. That was fun for me because we were both with Crossway then. Tell us about that initial trilogy and what inspired you to write about Father Peregrine, Prior William and the brothers of St. Alcuin. Why did you choose to write about medieval monks?

The Hawk and the Dove novels are about ordinary human lives. They explore the adversity and sorrow innate in our earth journey, and encourage the reader to imagine how simple kindness and willingness to understand can be all that is necessary to bring light into darkness. A person doesn’t have to be clever, rich, or talented to make a difference, just prepared to lend themselves to the work of compassion and gentleness. If you tell people that, it flows over them as a dull truism; but if you put it into a story set long ago and far away, you disarm their natural defences against preaching and instruction; so that they open the door of their imagination, allowing in the possibility of a way of living that creates peace. 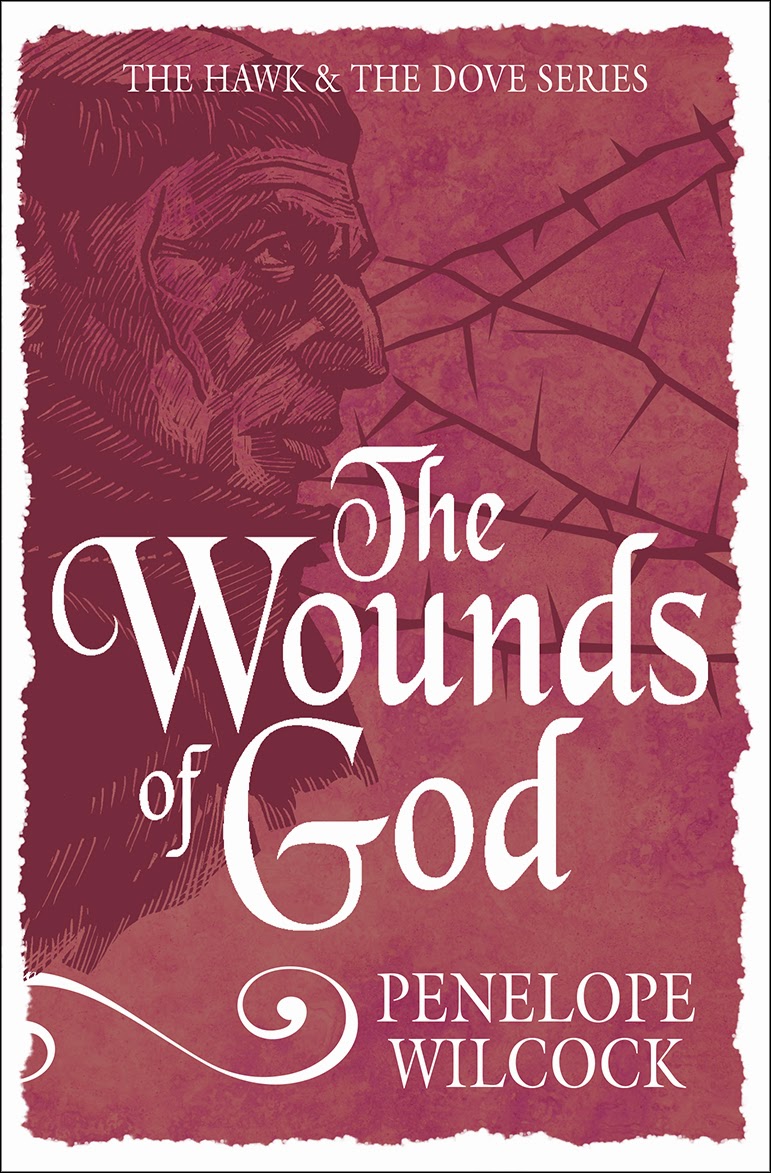 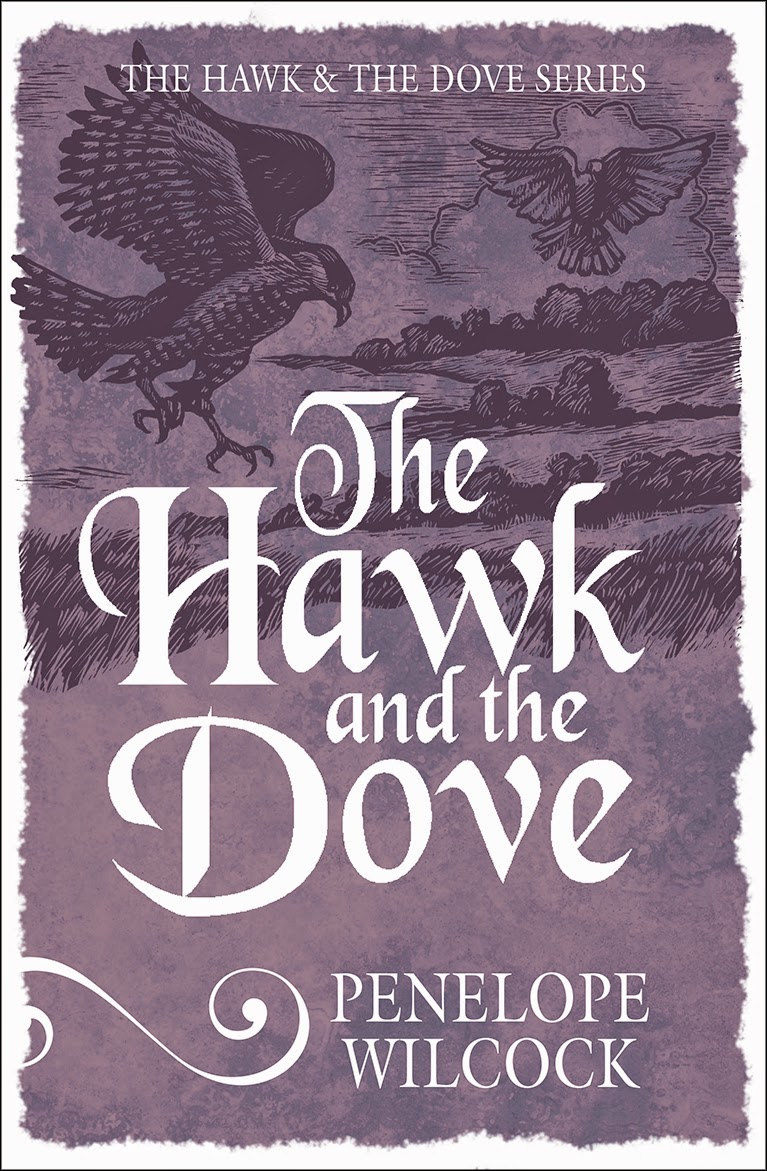 The first two books The Hawk and the Dove and The Wounds of God are frame novels with a modern mother telling stories to her children. Why did you choose this format and then abandon it for the later books in the series?

The frame tale was a popular medieval device for story-telling – a well-known example is Chaucer’s Canterbury Tales. The Fioretti of St Francis of Assisi, bringing to life so vividly the struggles and transformations of the early days of the Franciscan order, enthralled and delighted me when I was about fifteen. So the frame tale format of the first two books in the series were my salute to the wonderful cultural legacy of the medieval world, and to the enduring beauty and faithfulness of the Franciscans. That structure worked well for introducing the various personalities within the monastic community upon which the series centres, but The Long Fall (the third book in the series) took a different focus. In that novel I wanted to explore some of the issues facing people in chronic illness, or those treading the way of the Great Journey on out of this world. My work in hospice and nursing home chaplaincy left me feeling I owed it to some whose lives had been engulfed by illness and medical procedure, to give them a voice, to tell their story, to articulate some of both the pain and possibility inherent in such long, slow suffering. Serious and terminal illness can be very isolating, narrowing and restricting. So it made sense to abandon the full choral setting of volumes 1 and 2, in favour of the a capella solo plainsong melody of The Long Fall story.

And then twenty years later you continued the series with The Hardest Thing to Do and The Hour Before Dawn. Was it hard to pick up the series after so many years? What inspired you to do so?

At the time, I suggested to Crossway that it could be fun to celebrate ten years of the trilogy being continuously in print and steadily selling, with a new novel for the series, to which they readily agreed. Well, the one new novel morphed into a trilogy. That trilogy ended on something of a happy-ever-after note at the conclusion of Remember Me. I found myself asking the question, what happens next? What does happy-ever-after look like when you are the person actually living it? From which questions volume 7, The Breath of Peace, came about. By that time, my fiction series had become an anomaly in Crossway’s publishing programme, and they felt it no longer appropriate to continue the series. So my wonderful agent – Chip MacGregor of MacGregor Literary – helped me self-publish The Breath of Peace with Amazon’s Create Space.
Then, with someone new coming in to take the helm at Crossway, they agreed to allow my UK publisher to take on the whole series – incorporating The Breath of Peace and a new novel I’m writing at the present time. The first three came out in the new edition in February, the next three follow in July, and The Breath of Peace and the next title will follow in due course. In the hiatus between one edition and the next, the old editions have been withdrawn from production, leaving only the rag-tags of second-hand copies available for purchase. Which in turn has brought about the splendid circumstance of The Breath of Peace being available for sale for no smaller sum that $999.00! Which led to a disgruntled would-be reader leaving a one-star Amazon review headed ‘What the heck?’! 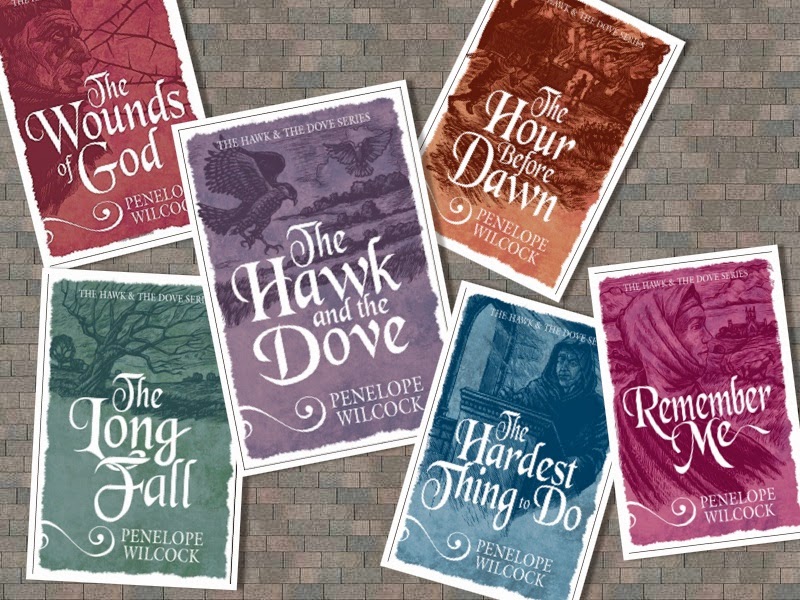 What an amazing journey your series has had. Isn’t it wonderful how book take on a life of their own? Writing these books must have involved a considerable amount of research. What were some of your most interesting research experiences?

I did very little research as such. I have lived and worked with both monks and nuns in various settings – including on a small farm in Devon where a Spanish priest taught me to milk a cow. I was part of a small inter-denominational community in York for a while, and our chaplain was the dear and beloved Ampleforth Benedictine, Father Fabian Cowper. I have travelled along with dying and bereaved people in hospice and parish settings. I have worked as a palliative care assistant, and a nursing home chaplain. I was a Methodist minister for years, pastoring about ten congregations in a variety of places. My student years were spent at York University reading English, which of course included medieval studies and Old English.

The only specific, isolated piece of research I did was for The Long Fall. To feel my way imaginatively into what medieval palliative care must have been like, I took a job for a summer as a night care assistant in the most basic and primitive nursing home I could find. Very little was done for any resident there which could not equally have been provided in the middle ages. It helped me write the book with some passion, it made visible many lives normally unseen. I’m not sure I have even really got over the experience, though.

Congratulations, Pen, on continuing the series so successfully and now on having the first three volumes reissued. What else would you like our readers to know about these books?

Hmm … Something I think readers don’t always pick up – I mean, I try to weave it in deftly, not labour the matter – is that each of the books in the Hawk and the Dove series is an exposition of a biblical text:

I guess if there’s something unanswered, folks will write in with their questions, and I can keep an eye out for those and answer them. But there is one more thing I’d like to say, which is a really heartfelt ‘Thank you!’ to my readers over the years. Publishing is a numbers game in the end, and unless Volume 1 is bought by enough people, Volume 2 will never see the light of day. I had a vision, a song to sing, a way of seeing the world – and I am more grateful than I can say that, because as the years went by people kept on buying the books from The Hawk and the Dove series, their choice to do so provided the possibility for me to go on writing – which has been my passion and my joy. And thank you also to the many people who have taken the trouble to send me letters and emails and messages via my blog, telling me how these stories made a difference in their lives. I am so grateful. It is an inexpressible treasure. Thank you.

And where can readers find you and your books online?
All my books can be found at Amazon, or a simple Google search will track me down. I write a regular blog, Kindred of the Quiet Way ( http://kindredofthequietway.blogspot.co.uk),  a place of many stimulating and insightful conversations – I love my blog readers and have made a number of new friends there.

For more Medieval stories see her Monastery Murders and Glastonbury, A Novel of the Holy Grail