A Month to Remember


November in South Africa, and worldwide, is a month full of wonderful, unusual and fun events that raise funds for worthy causes.

Each morning I wake to the sounds of Radio Jacaranda, synonymous with the beautiful capital city I live in and its purple blossomed trees that flower around this time of the year. In November, 'Sisters with Blisters'  (http://www.sisterswithblisters.co.za), a Radio Jacaranda initiative, is heavily advertised. This annual South African event, aimed at raising much needed awareness on women and child abuse in our country, marks the start of 16 days of Activism internationally for No Violence Against Women, a United Nations campaign. 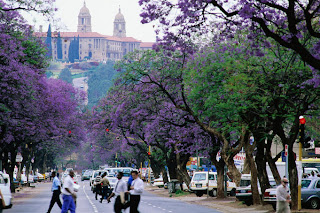 Radio Jacaranda, wanting to participate in this movement in a unique way that captured listeners' attention, came up with the concept: Shoes! They believe that women are willing to do more for this irrational fetish than one could imagine. The Sex in the City character, Carrie Bradshaw (Sarah Jessica Parker) once said she spent $40,000 on shoes and had no place to stay. “I will literally be the old women who lived in her shoes!” she said.

Jacaranda believed women would take up the challenge of walking in their stilettoes, allowing their feet to do the talking to break the silence—'heel to heal'. Even men participate ... and dogs (without the heels of course). Starting with 600 participants in 2006, Sisters with Blisters 2011 was supported by 5000 women, men and kids!

Another great initiative which has just recently come to my knowledge is Movember.

Hot on the heels of October’s Breast Cancer Awareness month, the gents, not willing to be forgotten or outdone, throw away their razors (or at least in part) and don their new handlebars. Movember is responsible for thousands of men worldwide sprouting mustaches, or moustaches as the British would write it. At first I was confused what all this MO stuff had to do with MUstaches, till I recognized the habit of writing in American English coming out in me. I soon made the MOnnection.

A worldwide initiative, during November, or should I say Movember, Mo Bros become walking, talking billboards raising funds and awareness for men’s health, specifically prostate and testicular cancer. It’s grown since its humble beginnings in Melbourne, Australia thirteen years ago to be a global movement inspiring more than 1.9 million Mo Bros, and even Mo Sistas, and raising millions. This is certainly an initiative that will have a lasting impact on the face of men’s health.

More importantly, check out the South African website http://za.movember.com/ – it’s really fun with offered advice like how to grow a Mo, and what foods to approach with caution when sporting a Mo, eg. cappuccino, milk, Irish Cream, Ale, Guinness or any brew served with a fine creamy mousse, Fairyfloss, Toffee Apples, Spaghetti Carbonara, to name a few.

And they’ve rolled out the red carpet for the MOscars where Mo’s try their creativity with a camera. Budding scriptwriters and aspiring Spielbergs! It was here that I discovered this hilarious You Tube video, "The Movember Song", created by South African comedy-pop duo Derick Watts & The Sunday Blues - home grown Mo’s – as they take viewers on a journey fraught with trials and tribulations as they seek to grow the perfect Movember moustache.

The doctor in this video is none other than our very own Dr. Michael Mol, South Africa’s first Mr. South Africa, and now host of The Dr. Mol Show (the SA version of Dr. Oz). Dr. Mol just happens to be the son of one of our church elders, Dr. Arnold Mol, who is a published non-fiction author. http://www.arnoldmol.co.za/

I even discovered that here at Volkswagen Group Parts where I work, our guys have banded together, got a group together on the website, http://za.movember.com/team/705517, and even made themselves a little Movember Mascot, complete with his own handlebar Mo,  all out of car parts except his Mo. Their team motivation is to change the face of Group Parts.

I don’t know if they raised any money, but they did give a great outward display of their support for this worthy initiative. Perhaps they need to apply some of their winning marketing strategies to their stiff upper lips.

Even my son in Cape Town took part, which took me totally by surprise. 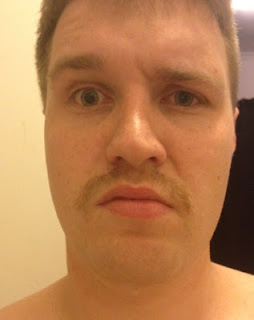 Most of the Mo Bros I know couldn’t wait for 1 December and the permission to shave off those tickly mustaches.

But the cause I love the most in during November is NaNoWriMo. National Novel Writing Month—Thirty Days and Nights of Literary Abandon. If you’ve never tried it, I highly recommend it, although it’s not for the fainthearted.

WriMos, as those who partake of this crazy event are known, have something akin to the two causes I mentioned earlier. Sisters with Blisters: because we writers walk a good couple of miles in other people's shoes—many times not comfortable ones either. The only difference is that our blisters are formed on our fingertips, not our heels. Movember: because even in our name, WriMos have their own special Mo. And what a special MOnth November is. Also, due to the frenzied nature of NaNo, November becomes a really hairy month for WriMos, as they seek to reach that 50,000 word count at all costs before midnight on 30 November. Mo Bros and Mo Sistas of the writing world.

But what’s a good cause if the funds aren’t raised? This year I decided to start donating each year that I take part in NaNo. I even earned myself a cool little halo on my NaNo profile pic. 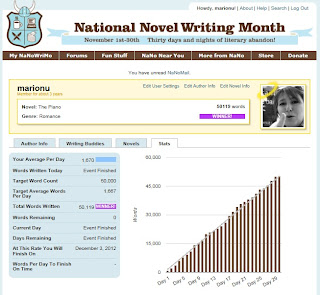 The organizers of NaNoWriMo reckon that if every WriMo donated just $10, they would reach their fund raising target. Donations help bring free creative writing programs to nearly 350,000 kids and adults in approximately 100 countries, 2,000 classrooms, 200 libraries, and 500 NaNoWriMo regions every year.

Why don’t you think of joining this creative revolution next year?

I had not planned to take part in NaNo this year, yet, somehow, on 1 November, I found myself thinking about a story on the way to work, and signing up before the morning was over. I validated on 29 November at just over 50,000 words. I have an almost complete first draft of what has turned out to be a really great story titled The Piano. 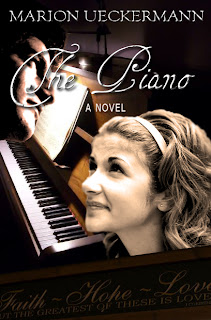 Although NaNo is over, for me it’s not over yet. I decided to personally extend my NaNo month another few weeks and push through until I have finished the story, setting myself the same daily word count targets as NaNo. At that pace, I should finish my novel within the next two weeks.

It’s been an amazing month of writing … one that has truly gotten me back into the writer’s seat and one that has formed some good writing habits. I just love being back upstairs in my writing loft working alongside my characters.

One thing that is great to see in worthy causes is the camaraderie that exists between fellow participants. I myself had so much encouragement during NaNoWriMo from family, friends, and fellow writers and I hope to share more about my NaNo month on my next blog.

MARION UECKERMANN’s writing passion was sparked in 2001 when she moved to Ireland with her husband and two sons. Since then Marion has has published some devotional articles in Winners at Work and The One Year Book of Joy and Laughter (published August 2011), as well as inspirational poetry online and in a poetry journal. Marion, who loves to multitask, has written her first Christian Women’s novel (unpublished) and is currently working on the sequel as well as a Historical Romance novel. Marion now lives in Pretoria East, South Africa in an empty nest with her husband and a crazy black ‘Scottie’. Marion is a member of the Christian Writers of South Africa and can be contacted via email on marion(dot)ueckermann(at)gmail(dot)com.
Posted by Marionu