A Kiwi Goes to ACFW Dallas 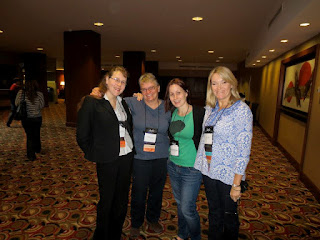 From left to right: Lucy Morgan-Jones from Australia, Valerie Comer from Canada, Me from New Zealand, Catherine West from Bermuda.

Love is traipsing around the entirety of San Francisco International Airport trying to find Peanut Butter M&Ms. At least, that's what I'll be telling my husband when I get home. To which he'll reply that love is letting his wife jet off to the other side of the world for nine days to pursue her writing dreams, leaving him with a too-busy-Daddy-no-time-to-stop ninja. He wins, but still, peanut butter M&Ms are harder to find than one might think in SFO!

I'm writing this sitting, waiting for my flight. Which kind of explains the ahem fact that this post wasn't up when it was supposed to be. Between having two Tuesday the 18ths, spending four days in conference land, and then a lightening quick shopping stop in San Francisco I had forgotten what day it was. Or more accurately, connected the day with writing something for here.

It would need about a ten part series to even start to cover ACFW (American Christian Fiction Writers') Dallas. Probably even more when you come from overseas and so have accent and language differences as well!

It was such a blast to get to catch up with some of the others from our blog in Dallas. The journey toward (hopeful!) publication is one that is full of challenges, especially when you are trying to get the foot in the door when you don't even live in the same country. So getting to have time in person with people who face the same thing themselves is so much fun.

The good news is that it looks like the market may be slowly opening up even further to considering international settings. With the reach of e-books growing, publishers are seeing new opportunities to target audiences that they ordinarily wouldn't be able to reach. I had one editor express an interest in seeing a manuscript I have that was originally set in New Zealand. Three years ago in Denver I was told that in order for it to even have a chance it would need to be rewritten to be set in the US!

I had some amazing meetings with agents and editors. Such an answer to prayer, since when I left New Zealand, I had a bit of a chat to God about how I really needed some sort of direction from Him as to whether this is something he wants me to keep pursuing or if it's something I should put aside for awhile. He opened a lot of doors so for now I'm taking it as a yes, keep going :)

How about you? Has God been opening or closing any doors in your life recently? 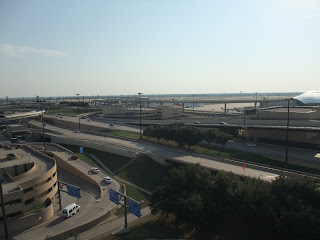 This is the "room with a view" Kara Isaac stayed in in Dallas, courtesy of the Hyatt Regency DFW. It would be fair to say the phrase means something slightly different in New Zealand :) When she's not writing, Kara loves hanging out with her husband and mile-a-minute one year-old affectionately known as the ninja, house hunting (ninja needs more space) and attempting to find things (ninja loves hide-and-seek).  You can find Kara on Facebook at https://www.facebook.com/KaraIsaacWriter or on Twitter at https://twitter.com/KaraIsaac
Posted by Kara Isaac