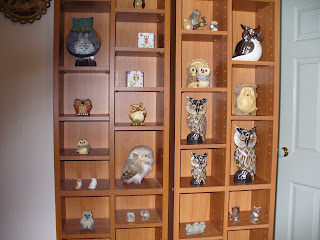 It started quite by accident. My husband was looking for a small something to add to a gift years ago and he saw a tiny, painted, wooden owl.  He thought it looked cute and bought it for me. I loved it. Since then the collection has grown so I now have over 100 owls. That’s just the owls on the shelves. There are others in the garden, on the walls, on bookmarks, paperclips and jewellery. They are inexpensive but they are a fun thing to collect. Here's a photo of a few of the owls.

Then, the other day a lady at writers’ group handed me a little owl button she bought she because when she saw it she thought of me and my love of owls as evidenced by my website, www.daleharcombe.com

That same evening a friend I hadn’t seen for ages came to dinner and presented me with a cute, tin owl with amber eyes. He is now comfortably at home in the rookery with his owlie mates. Here he is. 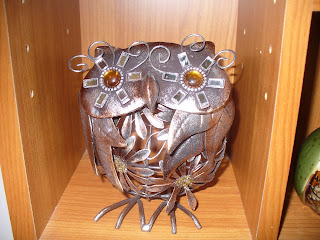 But what do owls have to do with writing? When we are writing about characters we might decide to give our character a fascination with some sort of items to collect. In a fiction manuscript I am working on at present the woman has a collection of thimbles, though not from choice but something her daughter thinks she would like. As she is a lover and owner of two cats, she also has a collection of cat ornaments.

When I wrote Streets on a Map I made sure the things Laila surrounded herself with showed different aspects of her character. Her lounge suite for example is tapestry with walnut arms with scratches in them, which shows she’s not a person who replaces things just because they are a bit worn. She goes for comfort and things with meaning to her. However the rest of the room shows her love of books and that money spent on them is an investment in pleasure and learning. Her books include classics by Bronte and Austen, books on philosophy, orchids, prayer, history and contemporary fiction as well as books of poetry both from the past and by contemporary poets. She is also interested in gardening and in particular roses, which is reflected in the flowers and shrubs chosen for the garden of the restaurant. The roses also have a sentimental family significance.

Abby, the other main character in Streets on a Map, likes to collect interesting artworks and crafts though she had no skills in that area herself. Maybe because she doesn’t have those skills. I can relate to that!  You can find out more about Abby In a interview with Abby I did at this site. http://lauries-interviews.blogspot.com.au/search?q=dale+harcombe

Abby’s interests are reflected in the type of music she listens to and sings, mainly old ballads and jazz music, plus in the collection of sheet music she keeps all carefully packed away under the bed. It shows she is almost obsessive about music and singing. She is a person who is not into sports but strictly an indoor person who comes alive at night rather than a morning person. That tells us quite a bit about her.

So back to the owls. One little owl started off a whole collection. Building a character is much the same. Sometimes we start with one little idea - a few lines of dialogue, a face we can’t forget ,  a character trait and from there the writer builds until you end up hopefully with a person that becomes real to the writer and to readers. To me that’s the secret to building a good story. 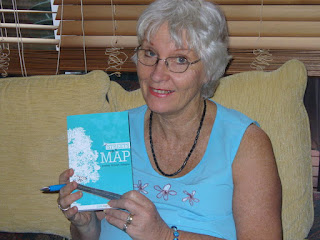 Streets on a Map, Dale’s latest novel was published by Ark House Press in December 2010. Prior to that Dale has had seven children’s books and Kaleidoscope a collection of poetry published. Many of the poems in Kaleidoscope have been previously published in Australia’s literary magazines. She has won prizes for her poetry and has been published in several anthologies. She has also written bible studies and Sunday school lessons.
More information about Dale can be found at www.daleharcombe.com or on her Write and Read with Dale blog http://www.livejournal.com/users/orangedale/
Posted by Dale