A Heart to Serve

My husband and I recently became members of the Southern Baptist Disaster Relief team. The purpose of Disaster Relief is that it is an organization of trained individuals who will respond to emergency disasters for evangelism and clean-up. For example, during the Katrina, they sent out thousands of volunteers to help re-build homes, feed the masses, help with insurance paperwork and just spread the love of Jesus. Because in an emergency situation such as that, you've got to convince people that they are not alone.

Actually it wasn't recently, it was like, 6 years ago. Our team leaders convinced us to train for this awesome opportunity. Which meant we drove down to Vermont and learned how to do mud-out, chainsaw training and how to feed 20,000 at once. Mud-out is when there has been flooding into people's homes and then it recedes - leaves toxic mud. You learn how to dig it out. And sterlize the environment so it's safe. We've also done the Chaplaincy training and Crisis Intervention.

It was pretty cool.

So. Four years ago, hubby and I went down to Cameron, LA for our first trip. Now, I puke on planes. Wish I didn' 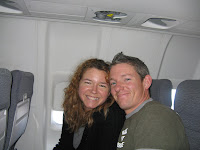 t, but I do. So I'm pretty much doped up on dramamine (I call it dopamine -lovely stuff - better than gravol) and I don't remember the flight down. Hubby usually carries everything and just hands me cup after cup of coffee once we land. See the smile?


It wasn't so much a disaster situtation, but more of a rebuild. The town of Cameron was still in shock a year later a 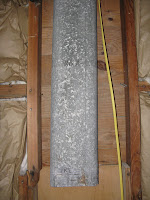 fter the second storm. Cameron is right on the coast of the Atlantic Ocean. So when hurricane Rita came in, there was no warning. The ocean waters flooded up, moving everything. When hurricane Ike came in 2008, about two and bit years later, everything that they had rebuilt, was gone. If you look closely, you can see the lines of how high the water was.

Such a flattering photo of me... 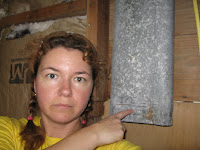 It was crazy seeing all the destruction. There were mattresses up in trees for goodness sakes. Graves has been upended. It was awful. People had to rebuild their homes at least 14' off the ground, or they wouldn't be insured. And for the people who weren't insured to begin with? Oof. There were trailers everywhere. In the teeny tiny town the 40 of us worked on rebuilding a church, and someone's home. And then we met him. I'm not naming him, let's call him Jim. Jim was a shrimp fisherman. He had insurance for the first house, but during the second storm, it blew away. People's homes actually blew away. His family of four (two teenage boys) were living in a pick-up camper. You know the kind that sit on the back of a pick-up? And he was trying to fix up the upstairs of his barn so they could live there. But. Because he was a shrimp fisherman, he had to work from sunrise to sunset every single day. To put food on the table. A five person group (including hubby) were able to bless him and his family by rainproofing the roof, sealing the walls and installing some insulation so they wouldn't freeze. The wife was beside herself and my friend got to talk to her about Jesus and the love He has for them. That no matter what happens, He's with them. The woman was saved. During the week they kept trying to meet with their husband, but he had to work. On the last day there, they got to pray with him, and just love on him. It was awesome.

But where was I? Well, even though I did all the training, I'm more of a hostess kind of gal and I volunteered to feed the 60 that were doing the rebuild. And of course I got violently ill where I had stomach pains all week. (Sadly enough during my second mission trip I was crazy-sick from all the mold and I could barely function while everyone left me behind and I just slept) But I could make breakfast and I could feed them all supper. So once in awhile I was pretty much all alone, hanging out in an old trying-to-be-rebuilt church, cooking for 60 with a few other ladies. In true disaster relief way, we all slept on the floor, cleaning out a corner to call our own. Three days went by and I realized that everyone was pretty filthy and their clothes were filthy and 60 people sharing 4 toilets? Time to clean. So I offered to do everyone's laundry while they were out. It was touching to see how bashful the older gentlemen were about handing me their undergarments, but I was firm - give me your dirty clothes. So I spent the day walking back and forth to the shower trailer (an actual trailer with three make-shift showers and a washer and dryer), hooking up the garden hose from someone's home nearby, turning on the freezing water, letting the hot water tank fill up, watch it all drain out onto the ground... it was disgusting. In situtations like that, the dirty water had to go all over the lawn. They didn't have drainage and the ocean's tide was still quite high, which meant nothing drained unless it was a hot sunny day.

In between washing clothes and checking on the lasagnes, I decided to clean out the toilets. I had my ipod plugged in and the door to the church locked so I could be all on my own. As I was crunched down on all fours, trying to clean behind the toilets, that Hillsong song came on, "Inside Out". And as I was scrubbing away with a toothbrush to reach into the cracks, and my bandana over my nose because I am terrified of waterbowl germs, it hit me.

"Everlasting, Your light will shine when all else fades,

Never-ending, Your glory goes beyond all fame,

And the cry of my heart is to bring You praise ..."

And I lost it.

You know that moment?

That moment when God is just so there, and He is just so huge and real and you cannot get up off the floor from kneeling because He is so tangible, so holding your heart with all His might that you realize that You are doing His work and at that very moment while He holds your heart, those sweet words of "Well done faithful servant" just wash over you like a refreshing breeze and you are facedown on the filthy floor and you are just crying your eyes out because you have never been in so much love before? And you realize that even in your pain, even in your home-sick exhaustion that you are exactly where God wants you to be and He is so pleased with your obedience, with your willing heart to just serve where needed?

And I'm sitting here with tears leaking out because I remember that moment like it was yesterday. And no matter what you are doing, whether fixing someone's house, making a meal, sending an encouragement card or cleaning a toilet... if you're doing it for God....well then, 'Well done faithful servant." 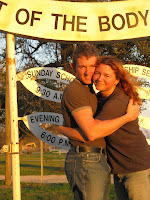 Jenn Kelly is the author of the "Jackson Jones" books which are published by Zondervan. She is working on something fantastically-crazy for YA and is praying her supersecretagentman loves it so she can finish it. She is also waiting for another opportunity to do Disaster Relief.