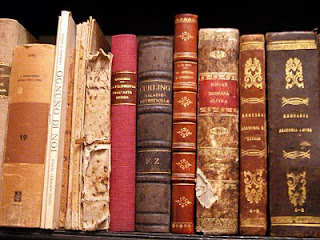 One of the most fascinating places I visited when we lived in Ireland was the library at Trinity College in Dublin. It is the largest research library in Ireland, containing around 5 million printed volumes and a vast number of manuscripts, maps and music.

The most famous book in this amazing library is located in the Old Library. The Book of Kells, a 9th-century gospel manuscript celebrated for its lavish decoration and called the ‘most beautiful book in the world’, has worldwide fame. Containing the four Gospels in Latin based on a Vulgate text, this manuscript is written on vellum in a script known as “insular majuscule”. Thousands of rare and very early volumes have also found their home in the Old Library.


Upstairs from where the Book of Kells is kept on view with other manuscripts, is the magnificent Long Room built between 1712 and 1732. Around 200,000 antiquarian tomes, tucked inside 21alcoves, grace the double-storey oak bookcases in a 65 meter long (213 ft) by 12.8 meter (42 ft) wide chamber with wainscoting and ceiling of old Irish oak. The sight is staggering! When I stood in this grandiose room, staring up into the 12.6 meter high (41 ft) timber barrel vaulted ceiling, I heard my youngest son, aged 10, whisper beside me, “I want to come and study here one day.” Unfortunately, we returned to South Africa before that dream could become a reality. 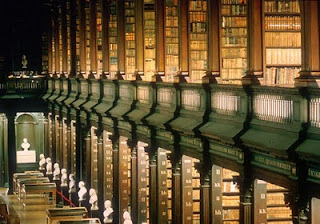 A collection of 14 marble busts began in 1743 of the great philosophers and writers of the western world like Jonathan Swift. Today, 48 white heads of wisdom, eminent contributors to knowledge, line each side of the Long Room: Socrates, Homer, Plato, Demosthenes, Shakespeare, Bacon and Dean Swift to name but a few. 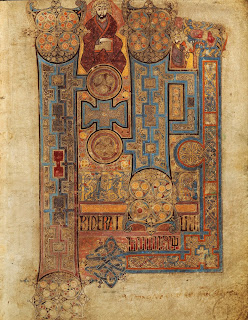 On this vellum manuscript seen on the left from the Book of Kells, are the opening words of St. John. I’d like to recount the true story of Jesus and the miraculous catch of fish from another part of John’s gospel, however.

In chapter 21, the risen Lord speaks to his disciples from the shore and tells them to throw their nets on the right side of the boat – they will find some fish there. Perhaps more a miracle than the catch was the fact that after a hard night’s work they still listened to the voice of a stranger on the beach, for they didn’t realize yet that it was Jesus. But maybe they were just tired of coming up empty-netted that they felt, “What the heck – one last cast can’t hurt . . .”

However, when the nets began to team with fish, they immediately realized only one person could know what lay beneath the depths of the sea – the One who had created it all. And Peter (don’t you just love him), true to his nature, plunges into the water, once again braving the waves to be with his Lord.

The writer ends the chapter stating that Jesus did many other things. But he felt that the world would not have room for all the books that would be written had all his miracles been documented.

Take a few moments to think of the bookshops and libraries in your immediate suburb. Think of the number of books stacked side by side in those places. Then think of these establishments in your city, and add the number of volumes they contain. Cast your mind even further afield to your country; and wider still, your continent. Then other continents; encompass the globe. Move to the ends of the earth – cyberspace. Amazon, Barnes & Noble, inter alia. It’s mind boggling to think of the myriad of books currently in print, resting on shelves, hiding in boxes, or stacked on floors. And the writer, John, suspects that the world would not have room to contain the books that would be written had all Jesus’ miracles been penned.

As a group of Christian fiction writers and readers, let’s focus on historical novels based on the miracles and life of Jesus Christ. I’ve listed a few that I know of, most gracing the very shelves of my study. I’ve grouped these under authors, placing in brackets what miracle or part of Jesus’ life the story is based on.

Why not take a trip to your own bookshelf, nearest bookstore or library, or even just down memory lane, and add to my list in the same manner in the comment section below? Let’s share what fascinating stories emanating from the life of Christ are out there for us to read.

- The Brother’s Keeper
(Tells the story of the latter part of Jesus’ ministry, up through his death and resurrection, as seen through the eyes of His own family.)

- Stones of My Accusers
(Reveals the transforming difference Christ’s mercy makes through the lives of several compelling characters.)

- Madman
(The story behind the Geresene demoniac of the gospels of Mark and Luke.)

- Unveiling Mary Magdalene
(Modern day story closely paralleling the biblical account of Mary Magdalene. This book takes a Novel Approach to bible study. The fictional story is followed by study of Mary Magdalene and her life-changing encounters with Christ.)

- A Lever Long Enough
(Travel back in time to first century Jerusalem to see if the Resurrection really happened.)

- The Hand that Drove the Nails
(The story of the man who crucified Jesus.)

- The Prisoner in the Third Cell
(A dramatic story of John the Baptist, imprisoned by Herod and awaiting death, struggles to understand a Lord who did not live up to his expectations.)

- The Day I was Crucified
(As told by Jesus the Christ.)

- The Divine Romance
(From the grandeur of Creation to the glorious union of the Savior and his bride, God's majestic love sweeps through time, space, and eternity in this greatest of all love stories.)

(I’ve listed even the Old Testament stories in the above series as they reveal the zenith of creation . . . the death and resurrection of Christ)

MARION UECKERMANN’s writing passion was sparked in 2001 when she moved to Ireland with her husband and two sons. Since then Marion has been honing her skills and has published some devotional articles in Winners at Work as well as inspirational poetry online and in a poetry journal. She has written her first Christian Women’s novel (unpublished) and is currently completing the sequel. Marion now lives in Pretoria East, South Africa with her husband, sons and a crazy black ‘Scottie’. A member and moderator of the South African Christian Writers Group, Marion can be contacted via email on marionu(at)telkomsa(dot)net or through her website www.inkslinger.co.cc
Posted by Marionu

New comments are not allowed.