THE BATTLE OF BLOOD RIVER

For over a century, 16th December has been celebrated as a public holiday in South Africa.

Following my last blog post  Amy De Trempe said she writes historical romance and added, “I wonder what I can find in the history that I can use in a novel. Time to look up what was happening there in the late 1700s or early 1800s . . .” 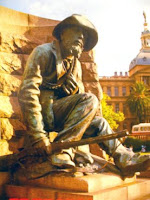 That period is rich in exciting times as intrepid explorers made inroads into the wilds of Africa. One of the most dramatic and exciting events is surely the Battle of Blood River.

On 16th December, 1838, the Boer leader, Andries Pretorius, led his people, known as the Voortrekkers (pioneers), to make a vow to God. If He protected them against the attacking Zulus, the country would always commemorate that day as a Sabbath. They would also build a church to honour God’s name.

In order to escape British rule, as well as endless wars with the native Xhosas, the Afrikaans-speaking Boers (literally “farmers”) left the Cape Colony. They loaded their possessions into ox wagons and rounded up their cattle. Then they set out on their north-easterly trek, going where no white man had ever been.

Before long, the Voortrekkers encountered the mighty Zulu nation. Leader Piet Retief and 69 of his men were unexpectedly butchered to death by the Zulu king, Dingaan, and his impi (group of armed men). In subsequent attacks, hundreds of men, women and children lost their lives. So an army of about 470 Voortrekker men set out to avenge Retief’s death.

On the 15th December, the pioneers camped along the banks of the Ncome River. Scouts warned them of an approaching Zulu impi of about 12,500 warriors.

The Voortrekkers drew their wagons into a D-shaped lager (a circle of wagons secured together with their animals corralled in the centre). As they prepared to defend themselves, they prayed for God’s intervention.

That night a heavy mist prevented the Zulus from attacking. Two hours before dawn, the Voortrekkers once again recited the covenant.

The attack came at dawn. The Zulus fought with shields and assegais, while the Voortrekkers had muzzle loaders, muskets and cannons. By midday, on 16th December, over 3,000 Zulu corpses littered the ground. The river had turned red with blood. Only three Voortrekkers were injured and none killed. The pioneers held a sober thanksgiving service, the first annual memorial service.


Several churches and monuments were built to commemorate this famous war. The best known is the Voortrekker Monument, outside the city of Pretoria (recently renamed Tshwane).

This spectacular building has a small hole in the top of the roof. At exactly midday on 16th December, a ray of sunlight shines through the hole onto a cenotaph on the lower level of the monument. It falls upon the words, “Ons vir jou, Suid-Afrika” (Afrikaans for “We for Thee, South Africa"). The light symbolises God’s blessing on the life and work of the Voortrekkers. 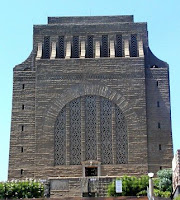 South Africans still celebrate 16th December as a public holiday, yet it is especially recognised as a religious day amongst the Afrikaans-speaking community.

One can only imagine the feelings of the Zulu nation down through the ages. Imagine their own country observing a public holiday to celebrate what was an overwhelming defeat for them—supposedly as a result of divine intervention.

In 1994, the first democratically elected government of South Africa kept that public holiday in the country's calendar. However it’s no surprise that they changed its name to “Day of Reconciliation”. Chief Buthelezi, a well-known politician and member of the current Zulu royal family, publicly apologised on behalf of the Zulu nation for the slaying of Piet Retief. The scene was set for healing to take place between the eleven official cultures of this turbulent land.

So, is there a part of history that would make a good background for a novel? I would suggest The Battle of Blood River. The popular author, James Michener, wrote the best-seller, The Covenant, based on this battle, but there is room for more new historical romances and other genres. How about a story from the Zulu point of view? Or a young girl growing up with an ox wagon for a home? Let's have some other suggestions. Please enter them below to win a postcard of either the Voortrekker Monument or Zulu warriors for the idea that most appeals to the Christian Writers of South Africa online group.


*Thanks to African Crafts Market for the use of the zulu warrior photograph.

SHIRLEY M. CORDER has been an RN, a pastor’s wife and a mother, but she never expected to be a published writer. A close encounter with aggressive cancer in 1997 changed everything, and she has been writing ever since. Well over 120 of Shirley’s inspirational and life-enrichment articles have been published around the world. You can contact Shirley through her website or follow her on Twitter.

(Footnote: Strength Renewed, Meditations for Your Journey through Breast Cancer, published in 2012 by Revell/Baker, is available at any of the online bookstores in print or e-format.)

New comments are not allowed.