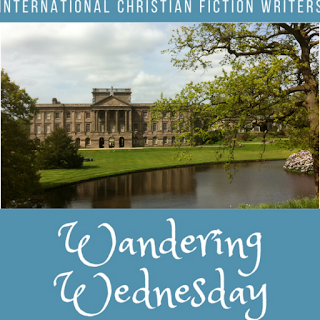 My brand new Regency novel, Miss Serena's Secret, is set partly in Derbyshire, so to celebrate, I thought it would be nice to take a visit to two of the iconic houses in this area, both of which have been used in filmed versions of one of my all time favourite novels, Jane Austen's Pride and Prejudice. 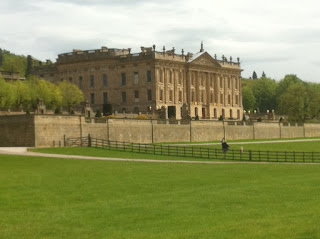 Chatsworth House is the ancestral home of the Dukes of Devonshire, and has been in the Cavendish family's possession for sixteen generations! This Baroque styled house was used as the setting for Mr Darcy's Pemberley in the 2005 film of Pride and Prejudice starring Keira Knightley.

A grand staircase takes you up to the first of the State rooms. 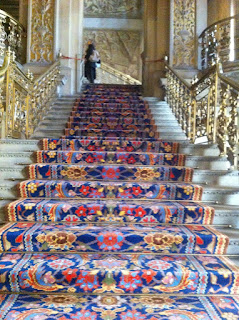 Chatsworth has often been voted one of England's favourite stately homes, and it's not hard to see why. Visitors are allowed to take pictures (!), and there is so much to see in a history-filled house of such wealth and importance. The Chapel remains virtually unaltered since it was built between 1688 and 1693. Its altarpiece of alabaster and marble is stunning, and a reminder of the importance faith held for families, when they would gather for daily prayers and Sunday worship. 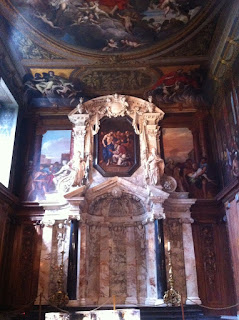 I wanted to show the awe of my artistic heroine (Miss Serena) as she visited a place such as this, and viewed the magnificence of the sculptures and paintings, such as those that line so many of the walls at Chatsworth. Here are some pictures I took of some of the magnificent artwork of Chatsworth, including the Sculpture Gallery from that famous scene in P&P! 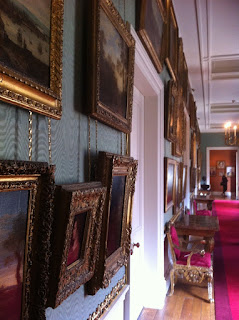 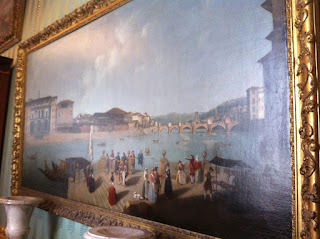 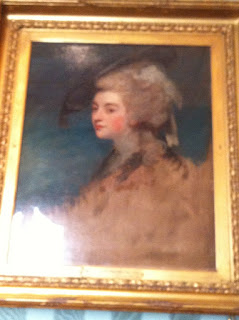 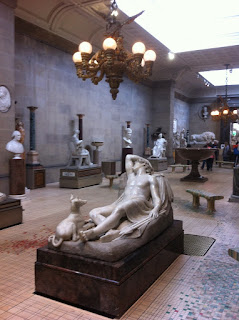 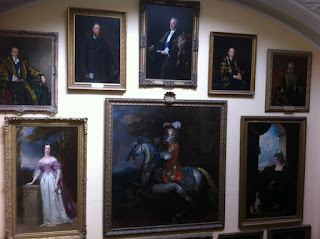 Places like Chatsworth were designed to make a statement about a family's wealth and social position. This can be seen in the State and Guest bedrooms, where magnificence abounds in the furnishings, fabric and absolute attention to detail. 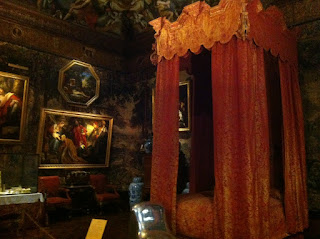 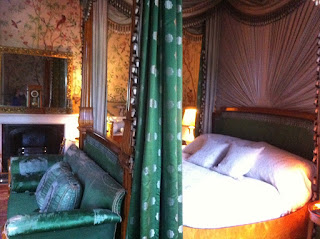 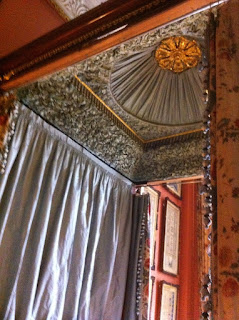 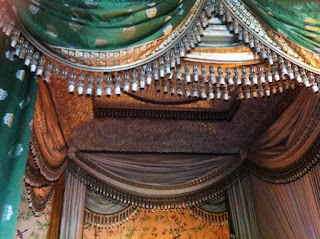 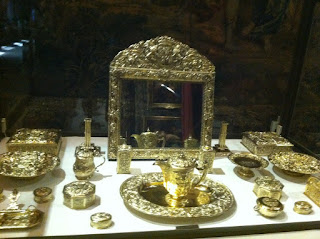 Imagine being brought up in such a setting! Imagine visiting, as the far more humble daughter of a far more humble background, and being asked to dine at a table not unlike this! 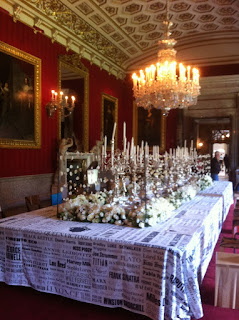 One of the things I enjoyed about Chatsworth (there were so many!) was the inclusion of collectibles by the family, things that make a house more a home. The 5th Duchess of Devonshire collected minerals, and I included references to the local stone known as 'Blue John' in Miss Serena's Secret. 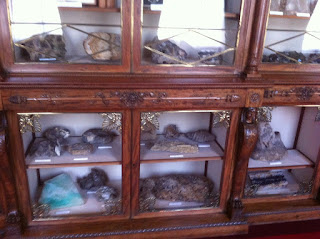 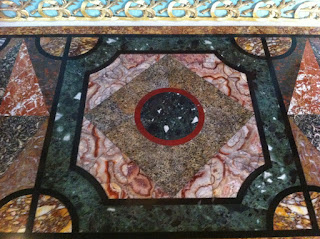 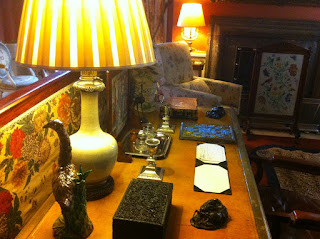 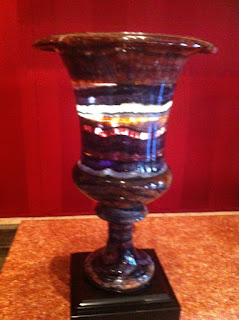 Of course, one can't visit Chatsworth without enjoying its magnificent gardens, with famous features such as the Cascades, designed to feed the Sea Horse fountain in the south lawn. 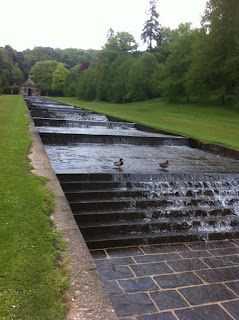 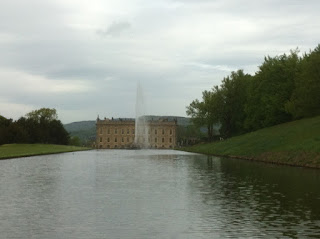 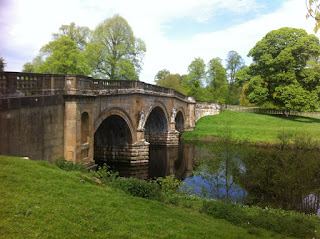 So much magnificence! So little time - especially if one still wants to visit the other (real!) Pemberley of Lyme Park, located not too far away in nearby Cheshire.

The exterior of this stately home was used in the 1995 BBC production of Pride and Prejudice starring Colin Firth, and holds special significance because my husband worked here in its garden in the 1990s!
So here's some pics I took with my sister of the gardens and courtyard of this very stately building. 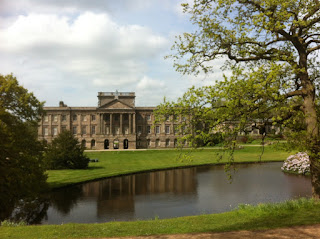 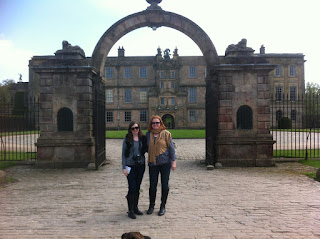 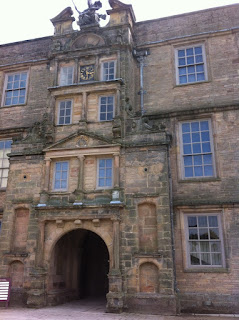 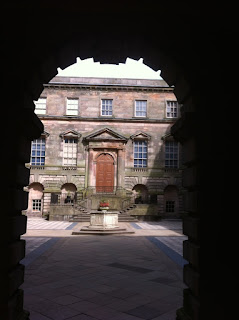 Visiting houses like these are such rare occasions for this Aussie from the opposite side of the world that one has to make the most of it via so many pictures and mementoes. For more pictures visit my website www.carolynmillerauthor.com and check out the Miss Serena's Secret page. 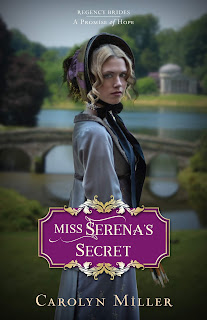 Want to know more about the book? Here's the blurb:

Scarred by her past, Serena Winthrop is determined to protect her heart - especially from flirts like the too smooth Viscount Carmichael. But when forced to share his roof, she discovers another side to the man who gambles with women's hearts as he does their husband's money.
​
Henry, Lord Carmichael, struggles with the weight of his Derbyshire's family's expectations, until he finds a hope shared by the too perceptive, too young artist. But he's promised to protect his best friend's innocent sister-in-law, not charm her, much to his - and her - private dismay.
​
When her art leads her to London infamy, he's forced to choose between the life mapped out for him, and the love of his life, with whom marriage might prove the end of his family line.

You can purchase copies here. 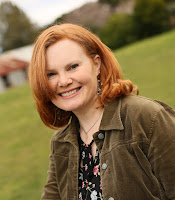 Carolyn Miller lives in the beautiful Southern Highlands of New South Wales, Australia, with her husband and four children. Together with her husband she has pastored a church for ten years, and worked part-time as a public high school English and Learning and Support teacher.
A longtime lover of romance, especially that of Jane Austen and Georgette Heyer’s Regency era, Carolyn holds a BA in English Literature, and loves drawing readers into fictional worlds that show the truth of God’s grace in our lives. Her Regency novels include The Elusive Miss Ellison, The Captivating Lady Charlotte, The Dishonorable Miss DeLancey, Winning Miss Winthrop and Miss Serena's Secret, all available from Amazon, Book Depository, Koorong, etc