We have TWO giveaways for our readers in March: 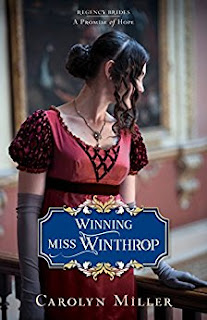 Catherine Winthrop has cried out to God too many times to count. Years ago, the man who stole her heart rejected her--and she's never recovered. Now tragedy has brought him back into her life. This time it isn't her heart he's taking, it's her home and her family's good name--and she has no one to share her grief.

Jonathan Carlew's life may look enviable from the outside--wealthy, handsome, landed--but the mystery surrounding his birth has shadowed his entire life. Now as he ascends to the barony, fresh challenges await, including a scheming mama who wants him to embrace power, even at the cost of losing love. How can he remain the kind, honorable man he strives to be and still meet the demands of his new society responsibilities?

These two broken hearts must decide whether their painful past and bitter present will be all they can share, or if forgiveness can provide a path to freedom for the future.


Carolyn Miller is giving away a print or ebook copy (winner's choice) of Winning Miss Winthrop. To enter the giveaway, please leave a comment on this post and/or Carolyn's Wandering Wednesday post on March 14. Receive two entries in the drawing by commenting on both posts. Please specify which giveaways you're entering in your comment on this post.

Check out Carolyn's post last Wednesday for more information on the giveaway and Carolyn's journey in Bath - the English setting for her regency romances. 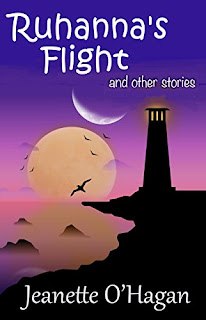 Ruhanna's Flight and other stories by Jeanette O'Hagan

Tales of wonder, romance, adventure - dip into the world of Nardva with this collection of stories.

Ruhanna's Flight - Ruhanna's father is coming for a rare visit. In a flurry of excitement, she prepares for his arrival, when suddenly everything goes wrong and her life is in danger.

Ruhanna's Flight and other stories included stories previously published in a range of anthologies plus never before published. While mostly set in the Southern Hemisphere of Nardva, it ranges across the ages - from early days of the Lonely Isles to the space age. A great introduction to this fantasy world of engaging characters and stirring adventures.


Jeanette O'Hagan is giving away a copy of Ruhanna's Flight. To enter the giveaway, please leave a comment on this post and/or Jeanette's upcoming Bookish Tuesday post on March 27. Receive two entries in the drawing by commenting on both posts. Check out Jeanette's upcoming Bookish Tuesday post on March 27 for more information on the giveaway. Please specify which giveaways you're entering in your comment on this post.

The Heart's Appeal by Jennifer Delamere


Strong-minded and independent Julia Bernay comes to London to study medicine and become a doctor--a profession that has only just opened up to women. She witnesses a serious accident, and through her quick actions saves the life of an ambitious young barrister named Michael Stephenson.

Coming from a family that long ago lost its money and its respectability, Michael Stephenson has achieved what many would have thought was impossible. Hard work and an aptitude for the law have enabled him to rise above his family's stigma and set him on the path to wealth and recognition. But his well-laid plans are upended when the accident brings Julia into his life.

Michael soon discovers he's met a woman every bit as stubborn and determined to make her mark on the world as he is. Sparks fly--but will they find common ground?

The Innkeeper's Daughter by Michelle Griep

Dover, England, 1808: Officer Alexander Moore goes undercover as a gambling gentleman to expose a high-stakes plot against the king—and he’s a master of disguise, for Johanna Langley believes him to be quite the rogue. . .until she can no longer fight against his unrelenting charm.

All Johanna wants is to keep the family inn afloat, but when the rent and the hearth payment are due at the same time, where will she find the extra funds? If she doesn’t come up with the money, there will be nowhere to go other than the workhouse—where she’ll be separated from her ailing mother and ten-year-old brother.

Alex desperately wants to help Johanna, especially when she confides in him, but his mission—finding and bringing to justice a traitor to the crown—must come first, or they could all end up dead.

The Heart Between Us by Lindsay Harrel


Megan Jacobs always wished for a different heart. Her entire childhood was spent in and out of hospitals, sitting on the sidelines while her twin sister Crystal played all the sports, got all the guys, and had all the fun. But even a heart transplant three years ago wasn’t enough to propel Megan’s life forward. She’s still working as a library aide in her small Minnesota hometown and living with her parents, dreaming of the adventure she plans to take “once she’s well enough.” Meanwhile, her sister is a successful architect with a handsome husband and the perfect life—or so Megan thinks.

When her heart donor’s parents give Megan their teenage daughter’s journal—complete with an unfulfilled bucket list—Megan connects with the girl she meets between the pages and is inspired to venture out and check off each item. Caleb—a friend from her years in and out of the hospital—reenters her life and pushes her to find the courage to take the leap and begin her journey. She’s thrown for a loop when Crystal offers to join her for reasons of her own, but she welcomes the company and the opportunity to mend their tenuous relationship.

As Megan and Crystal check items off the bucket list, Megan fights the fears that have been instilled in her after a lifetime of illness. She must choose between safety and adventure and learn to embrace the heart she’s been given so that she can finally share it with the people she loves most.


Abiassa’s people fall. Her Deliverers wait as Poired Dyrth marches unchecked through the Nine Kingdoms. He’s taken the Embers of countless Accelerants. He’s taken Zaethien and Hetaera, the mightiest cities of the Nine. He’s taken the blood of the royal family. Now Dyrth is after Haegan’s power—the Fierian’s power. And after that, he wants the world.

But Dyrth will not take it unopposed. Battered and outnumbered, the remnant of the Nine forge new alliances, make friends of enemies, and prepare to stand against the last great press of evil. In faith, they wait. The Fierian will come.

While war rages without and within, Abiassa’s people face their greatest need. But before the Fierian can fulfill his destiny, he has to defeat the enemy in his own mind.

The Golden Vial by Thomas Locke


Lady Shona, the newly crowned queen of the realm, is a leader without a throne. Pursued relentlessly by a dark force, her small contingent of loyal followers must make a difficult choice--flee or fight. Determined to save her land from nefarious threats, Lady Shona decides that she must seek out the enemy and attack them head on--a strategy that leads back to the region of the Three Valleys where Hyam was born.

Alas, Hyam has been struck by a mysterious illness that is silently sweeping through the realm. Known as the wasting disease, the sickness has no cure. But there is one shred of hope for Lady Shona and the realm--and it comes in the most unlikely of forms. A young orphan, untested and untrained, could well mean the difference between victory and total defeat.

Thomas Locke concludes his epic trilogy with a gripping tale of courage that will inspire readers to persevere even when all seems lost.

A Most Noble Heir by Susan Mason


When stable hand Nolan Price learns from his dying mother that he is actually the son of the Earl of Stainsby, his plans for a future with kitchen maid Hannah Burnham are shattered. Once he is officially acknowledged as the earl's heir, Nolan will be forbidden to marry beneath his station.

Unwilling to give up the girl he loves, he devises a plan to elope--believing that once their marriage is sanctioned by God, Lord Stainsby will be forced to accept their union. However, as Nolan struggles to learn the ways of the aristocracy, he finds himself caught between pleasing Hannah and living up to his father's demanding expectations.

At every turn, forces work to keep the couple apart, and a solution to remain together seems further and further away. With Nolan's new life pulling him irrevocably away from the woman he loves, it seems only a miracle will bring them back together.


She was far more capable than Earth’s leaders had accounted for—and they had no idea what she’d do next.

Known as a brilliant mind that could hack humanity’s darkest secrets, seventeen-year-old Sofi Snow is the most wanted teenager alive. She found her way to the icy, technologically brilliant planet of Delon to find Shilo, the brother everyone but Sofi believes is dead.

But as she and Ambassador Miguel partner to find her brother and warn those on Earth of Delon’s dark designs on humanity, Sofi’s memories threaten to overtake her, distorting everything she holds true. She knows the Delonese kept her in a dark, deceptive place . . . and destroyed a portion of her life. Now, the more they discover of Sofi’s past, the more Sofi feels herself unraveling—as each new revelation has her questioning the very existence of reality.

In this harrowing sequel to The Evaporation of Sofi Snow, Sofi and Miguel must trust each other and discover the secrets locked inside Sofi’s mind as the line between what’s real and what they imagine begins to slip away . . . threatening to take humanity with it.

Available from Amazon.com
Posted by Narelle