Hi everyone! So the debut has been out for a couple of weeks, and people love the cover. I want to give away a book, and take you behind the scenes for a look at the cover development and selection.


My original idea didn't work out. I wanted something like this Picnic in Provence cover, but in yellows and oranges. Maybe a sunflower field, the Rhine, the girl. But my publisher doesn't do this kind of cover.

We needed a photograph and a person. I was given the opportunity to search a site and provide input, and I offered a dozen photos/ideas. One was a bride and flowers. The designer found a different image inspired on that bridal idea and that was the image that later became the cover.

I'm so grateful I was able to give so much input. As most of you know, most contracts, mine included, give the publisher full control of the cover.

Here are other ideas we looked at.

This one was too happy. There are happy moments in the novel, but this cover doesn't reflect the overall mood. And while I like partial faces on covers, I wasn't too keen on this one. 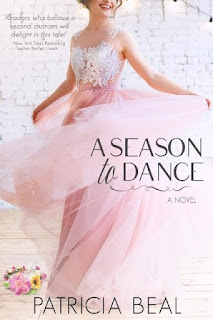 And we looked at this option too. The idea could have worked. I love the tree branches and the flowers, but the model is too young for a story of second chances. Wrong hair color too. 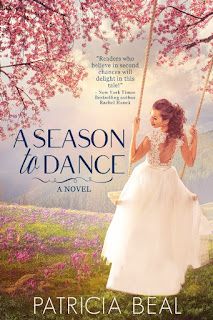 So the bridal stood. I love it because it communicates the perfect mood and is so elegant. It's mysterious. She's walking into her story and reflecting at the same time. I'm so thrilled with it.

What did you think about the other options we looked at? How about the process?

Remember to comment for a chance to win a paperback copy of A Season to Dance (void where prohibited).

Thanks for stopping by!

Patricia Beal writes contemporary Christian fiction and is represented by Leslie Stobbe of the Leslie H. Stobbe Literary Agency. Her debut novel, A Season to Dance, is out now (Bling! / Lighthouse Publishing of the Carolinas 2017). Order here!

Email ThisBlogThis!Share to TwitterShare to FacebookShare to Pinterest
Labels: A Season to Dance, Book Cover, Lighthouse Publishing of the Carolinas, Patricia Beal