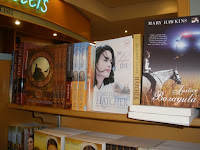 Where does God keep His books? No, I’m not being facetious, for it is a fact that the Almighty has books in heaven. Who looks after them is not mentioned, or where they are stored, but they are there. I believe God was the original author and we have the privilege of following His lead. Maybe the reason for our overstocked bookcases can be attributed the sharing in this interest of God too.


How the psalmist knew of this he doesn’t say. This is what he records: ‘Your eyes beheld my unformed substance. In your book were written all the days that were formed for me, when none of them as yet existed.’ Psalm 139:16.


I wonder what God wrote beside each day the psalmist lived? Do I wonder what He writes in the columns of my days? Sometimes!


Books are mentioned a few times in Revelation. The one in chapter 5 caused John to weep loudly and feel deeply for it appeared no one could open it. That was until the Lamb stepped forward. It opened up issues people have been discussing ever since. Does that book relate to the book sealed in Daniel 12? In that chapter God made what was written an intriguing mystery. The account doesn’t say how Daniel felt but as he had been privileged with other future events I think he would have shed a tear or two also.


In Revelation 20 there are two, maybe three books highlighted. They are judicial books which will strike fear into those called before the throne. The book of life mentioned in both Testaments, (Exodus32:32-33.Psalm 69:28) a record of personal works seeking salvation through them. How sad will the verdict be as by such works no one can reach the standard required without Jesus as Lord and Saviour! Only by faith in Him can a person be recorded in another book titled ‘The Lambs book of Life.’ (Revelation 13:8). A person’s name though foreknown comes alight when that individual calls out to Jesus the crucified and risen Lord.


I have to admit I’m intrigued by a small scroll in Revelation 10:8-10. John had to take it and eat it. Was this a special and one off, limited edition? Sweet to the mouth, bitter to the stomach it had to be ‘regurgitated’ by John through his pen. None of us should have an idea that our writings are divinely inspired, but there is a principle shown here. What is it? What we receive from the Lord is pleasing to our taste. However when we share it with others they reject it. The result, we feel a sense of the bitterness of the moment, for the person and their loss which is ultimately sourness to their soul.


The final book I find on Heaven’s bookshelf is mentioned in Malachi 3:16. It is called ‘a book of remembrance.’ The name of those inscribed was because the revered the Lord and encouraged one another. They did this in troublesome times and the Lord was so pleased He underwrote their names with ‘They shall be mine. My special possession.’ Is this a one off book? Could it also be applied to Hebrews 10:23-25? There we read of a Church facing persecution. How did they rise about the pain, shame and loss? They held fast their faith. They believed in the faithfulness of the One who promised. They provoked each other to love [each other and their persecutors] and good deeds. They met together for mutual encouragement and may I add, to remember the Lord in teaching and communion.

That’s a book I’d like my name to be etched in. It is, however, Heaven’s book of those in hostile places who stand true to Christ and each other. Should you or I be facing such situations may, by God’s grace we stand true.

The Warrior Lord's Sword is my latest 31 day Devotional. Scripture has a lot to say about itself. This centres around Hebrews 4:12.
Posted by Ray Hawkins