I love using big words when appropriate. That and I can't make spell-check work on the word: dilema. dilemna. dilemma.
No idea.
To all you writers out there. Tell me you have a notebook or a board in which you write down your fleeting ideas and then put them up so you can use them later.
I have a wall. Granted, the wall also has pictures my son has drawn and photos of my little family, but those are just inspirational too. So on my wall are little post-its that I have to tape on because they never actually stick to walls you know, and I have about five ideas for books right now. And yes, it makes me crazy because sometimes I want to work on different ones at different times.
So.
Last year, I came up with an idea for an Amish Fiction. I may have mentionned it before. I'm very good at talking about myself, you know. I know it quite well. And I'm crazy excited about it. But... on the last day of our vacation when I was working so hard on it, another idea popped into my head. A complex, and I hope intricately plotted YA dystopian.
I fully embrace my 'teenagerishness' (yes it's a word, I made it up) and will not bow my head in shame when I say that I looooove YA. I love the giddiness of first kisses and the struggles through hormones and feeling unimportant. Yes, I inhaled Twilight (yes, the writing could have been edited), Hunger Games, Blood Red Road... there is something ... fresh about them. Maybe it's because their characters are driven to hope?
So I began writing my dystopian.
It's almost done. It's sitting at 82,000 words and I need to figure out the ending (should there be a cliffhanger for a second? Do I write it as a trilogy as all teen novels are these days?) and I need to edit it before sending it to an editor (yeah, I'm paying) to make sure it's good enough.
But...
It's edgy.
Some very bad things happen in it.
Real things.
I was told it was too edgy for Christian fiction (which is a whole other 'discussion' right there).
So, now what?
I can't... I can't soften it.
But I can't take God out of it either.

So now I have three choices.  Make it way less edgy, which I think will ruin the entire point of the story. The novel has rape (not graphic - it's eluded to), they live in a commune (very touchy subject for some reason), and the leader manipulates the village into thinking they should worship him (apparently very touchy subject as well).
Second choice: Make God ... softer. I've referred to Him as the Creator to whom the village prays to. I even drop a few bible verses into it, which the heroine later finds out are being pulled out of context (oh the discussions we could have about that!), to figure out how to make Him prevalent.
Third choice: not write it. Which is not possible. You are all familiar with that fire in your belly and you have to 'give birth' or it could get ugly..

So here's the issue.

I was given the gift of writing (yes that sounds vain). I have written numerous skits for my church - which I think were pretty awesome. I have written two books that were 'gently Christian'.  So... do I write it as I want to write it and try to convince the Christian publishers that they need it? Or do I write it with a more less-obvious slant and push the other markets to publish it. Hoping that when (not if - must stay positive) the book is published and people read it, perhaps they will say, 'oh! She's a believer!'. Or maybe I'll get fully slammed like authors usually tend to get.

Any writers out there wondering whether they should stick to the 'genre'? Or if they should just write what's written on their wall? 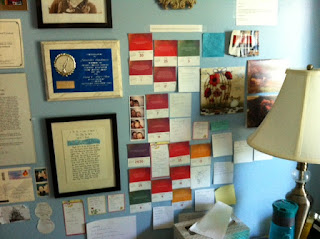 Jenn Kelly is an author! This is her 'creative wall'. Note the plaque for winning best playwright in Ontario and the card framed which is entitled, "Someday You Will Be a Writer". She is currently trying to be brilliant. You can read her webpage if you like, but seeing as how she hasn't written anything on it in awhile, there really isn't any point. Although she really should start doing book reviews because she is reading so much. She thinks you are all marvelous and wants you to never give up. Also? She has no idea how to spell 'conundrum' either. Nor how to use the spell check button. It just looks at her like she's an idiot.