After eight years in Brazil, we've come home. Or I have, anyway. Back to my home country of the United States where I was born and grew up - but this time accompanied by my Brazilian husband, Athos, and my three-year-old son, Ethan.

Ethan, in fact, shares both nationalities - making him the first true Brazilian-American in our family.

And as we start over again in rural South Dakota, making our home and finding jobs and ministering through our rural rancher's church, I find that both Athos and I carry the same strange "Brazilian-American" mix in our blood - though our passports claim differently.

Just this morning as I was taking a shower, I reached for something on the shelf - and ducked to make sure I wouldn't touch the shower head. Why? Because in Brazil, shower water is heated directly through strong electric currents in the shower head - meaning that if you touch, the combination of wet feet and powerful electrical current equals SHOCK. A shock bad enough to paralyze for several hours (an in the case I heard of an American kid on a mission trip to Brazil) or even cause a pregnant woman to miscarry (a whispered story on Athos' side of the family).

My dad noticed, too, that Athos washes dishes Brazilian-style - ignoring the American double sink and hot water and washing them one by one, in cold running water. I, on the other hand, mingle the two: I turn on the hot water, but ignore the double sink. And continue to wash them single-sink-style, the way I did in Brazil: soaping each dish individually and rinsing it hot water. Brazilian-American indeed.

In restaurants Athos and I still pick up burgers (American burgers, mind you, with all the yummy American trimmings like rings of fresh onion, dill pickle slices, and pungent yellow mustard, instead of ham) or hot dogs (American, again, with chili and onions and mustard instead of corn, peas, and shoestring potatoes) - we both reach for napkins. Not for our chins, but for our hands. To HOLD the hot dog or burger while we eat. Literally, yes, wrapping the burger or dog in a napkin and eating it while keeping the napkin carefully in place. And our hands clean.

I used to think that was a bit unnecessary, if the motive was sanitation - as Brazilian still eat french fries with their fingers. If your hands are dirty, well, then, your fries will be, too - and so bunting your burger won't help much.

Until Athos corrected me. The napkin, he said, is not for cleanliness but to keep the grease off your fingers.

"What about the fries?" I protested. "They're greasy, too."

But it's a dry grease - not a wet oil like the kind that oozes from street-vendor burgers slathered in (heavenly) bacon and garlic paste and ripe tomato.

Oh, how years abroad change and mold us, in even the tiniest and least perceptible of ways. And so much we learn, soaking up our new knowledge like mango trees on the branch. Not always aware that such growth is even happening.

Once back in the U.S., it's amazing how these new bits of knowledge, gleaned over eight years of joys, mistakes, and frustrations, come back to the surface. How things once so familiar and commonplace, like the passion fruits on the vine (below) begin to look exotic again. I look at my old photos in a sort of nostalgic disbelief, their clear memories of everyday use fading into a haze of tropical memory. 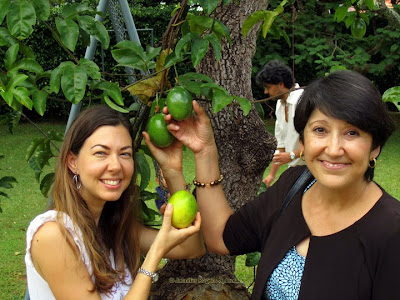 The same way, after several post-Japan years had passed, my Japanese friends looked... well, Japanese. Strangely. For the first time in my life. When I was living in Sapporo, bowing and nodding and wearing appropriately subdued clothes and buying subway tickets, my friends were just my friends. Yumiko. Asuza. Makoto. And when I saw them years later, in happy photos, I was struck by how "Japanese" they appeared (whatever that's supposed to mean) and how "Japanese-ified" I had become with my trendy sweatshirts and cherry blossom hair clips.

We never quite go home again.

We are always changed, always different, always morphed and morphing into new creatures.

"New creatures" - appropriately reminiscent of our new natures in Christ. A little bit wiser, a little bit more broken, a little bit vulnerable. Faces and experiences and failures have sharpened us, softened us. We miss. Long. Remember. And sometimes feel a pang of emptiness that cannot ever be filled - because while I am longing for little pieces of Brazil, I'm also longing for fragments of Japan. I cannot exist in two places at once; the whole can never be fully reconstructed.

And even if I could, my dear Mr. Horimoto from Japan, who died while I was still in Sapporo, is still gone. Leaving an emptiness that words cannot express. Faithful Hiroki of Sapporo Baptist Church, who struggled valiantly against health problems and schizophrenia, is now with his Lord and in his right and peaceful mind. He left my husband his Bible. He left a hole in my heart that will only be healed in eternity.

Or the sweet little disabled two-year-old named Joao Pedro whom we nearly adopted back in Brasilia. And then at the last minute, after all the meetings and government red tape and medical reports, we backed out. Realizing that his adoption would require us to stay another two to three years in Brazil, and force Ethan into Brazilian public school (which we absolutely didn't want). Would it be worth it, in the long run, to lose one child to drugs and violence to try and save another?

Yet the imagine of Joao Pedro's photo on the adoption agency's table haunts me. Breaks me sometimes, if I let it.

We are mosaics, pottery shards. Molded in the Master Potter's hands so that we might breathe out the Living Word in each culture, each country, each precious life.

And we are writers. Gathering up the pieces and serving them to the multitudes in astonished joy, watching the Good Shepherd use our humble, broken words to feed the thousands we never dreamed possible.

Have you come home again? What was it like? What do you miss, and what pieces have you brought with you?

Jennifer Rogers Spinola and her family have just relocated to rural South Dakota (5,000) from the capital of Brazil (3 million). Her debut novel "Southern Fried Sushi" was just named a Christy Award finalist for 2012, and her third novel, "'Til Grits Do Us Part," releases November 1. AND - she just found out she's pregnant after eight years! Already showing quite a bit at ten weeks, too.
Posted by Jennifer Rogers Spinola