Calvin College’s Festival of Faith and Writing in Grand Rapids, Michigan, last weekend was a readers conference rather than a writers conference. The college campus swarms with writers along with librarians and English teachers, college students and retirees--2000 of us mobbing this campus of 4000 students. I participated in a workshop on short-story writing and got a good start thinking through a new project. But the emphasis of the Festival is less on the details of craft and more on the big picture. I came away reminded of why I do this stuff and motivated to think more deeply about the larger questions.

Conferences are times of seeing old friends and making new ones who share a love of quality literature that explores serious questions of faith. Natalie Miller (left), Kim Childress (center) and I (right) were all in the same writers critique group a lo-ong time ago. Now Kim is an editor, drawing us both in with projects. Naomi Kinsman is one of Kim's authors at Zondervan, and David Diaz? He won the Caldecott for Smokey Night by Eve Bunting. This year he has illustrated Gary Schmidt's Martin de Porres; the Rose in the Desert (set in Peru and due out in June 2012). 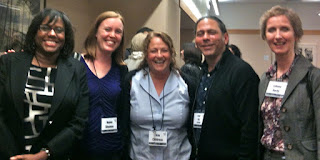 Gary Schmidt was at the festival, too. He is on the faculty at Calvin College. He's also the author of several young adult novels I have appreciated: The Wednesday Wars, where the only Protestant in the class gets stuck in study hall learning Shakespeare while his Catholic and Jewish classmates go to religious instruction; and Okay for Now, whose new-kid-in-town protagonist discovers art and skills of observation copying Audubon birds in the library. (I have a soft spot for straight boys with artistic sensitivities.)

Fransisco X. Stork was another YA author I appreciated. As a Mexican American he likes to write about Latino characters. In Marcello in the Real World his character is a high-functioning Aspergers-syndrome teen in his first job outside the protective environment of his special school. Marcello has "a special interest" (one might even say "obsession") with God. I loved the book, but was disappointed that Stork (a gentle grandfatherly man) seems to be more concerned with the fact of faith than with its object. 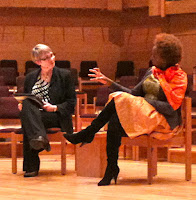 The books I have mentioned so far are mostly set in the United States even when they involve minority characters. Some of my favorite speakers were African. Chimamanda Adichie is Nigerian (here interviewed by Susan Van Zanten). Adichie was raised Catholic. "It's a culture," she says, "not just a religion." Her novel Purple Hibiscus wrestles with public holiness along side private domestic violence.

Nigeria is intensely religious, she says. So much so that the next question after "What's your name?" is often "Where do you worship?" followed by "Come to my church." Not exactly typical USA. 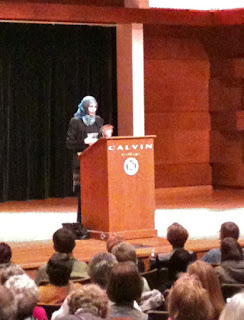 This conference is about faith and writing, not necessarily Christianity. The author who impressed me most was Leila Aboulela, a lovely Sudanese/Egyptian Muslim woman living in Britain. Like Adichie, she grew up reading English books about children who ate strawberries and played in the snow. Her favorite book is Jane Eyre, which she sees as distinctly Christian. The main story problem of being unable to marry the man she loves because he is already married is easily solved in Islam with multiple wives. But Aboulela admires Jane's strength of commitment to her religious beliefs, refusing to become Mr. Rochester's mistress. Aboulela's novel The Translator (now on my to-read list!) is a Muslim version of Jane Eyre.

The Calvin College drama department put on a play of Walter Wangerin Junior's allegorical fantasy Book of the Dun Cow. Actors donned elaborate masks and strutted for all the world like roosters, hens and other barnyard animals in an intimate theater-in-the-round setting complete with trapdoors and a walkway around the outside wall. It was a fascinating theater experience that made me want to reread the book.

Although I had systematically combed the library for books by the authors before I went, I left Grand Rapids with a longer to-read list. Also a stack of beautiful new picture books. Festival 2014 is already on my calendar. I love being stretched.
Posted by LeAnne Hardy